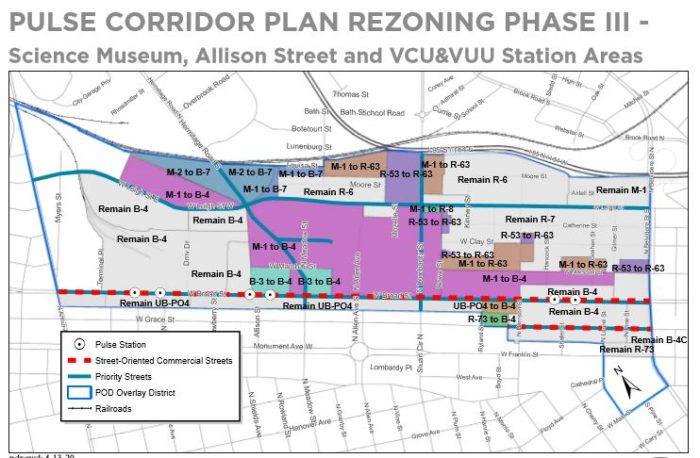 The Richmond City Council meets at 6 p.m. Monday. The agenda includes a vote on the third phase of rezoning recommended in the city’s Pulse Corridor Plan.

The proposed changes, which focus on land primarily north of Broad Street in and around the Carver and Newtowne West neighborhoods, have been met with opposition from area residents and multiple neighborhood and civic associations, prompting the council to defer the vote at its previous meeting.

Also on the agenda is a proposal continued from July to rename Route 1 in the city’s Southside from Jefferson Davis Highway to “Richmond Highway.” Full agenda available here.

The City Council will vote on a proposal from Mayor Levar Stoney to establish a dedicated funding stream to the Affordable Housing Trust Fund. 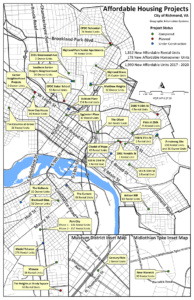 A map of planned, completed and underway housing projects in the city. Click to enlarge. (City of Richmond)

Under the proposal, future tax revenues from properties removed from the city’s real property partial tax exemption rehabilitation program will go directly to an AHTF special fund to build new income-based units. As properties are phased out of tax-exempt status, the finance department would direct that new revenue to the AHTF.

The administration anticipates this will result in $2 million in revenues in fiscal year 2022, growing by approximately $2 million each year for the next five years and reaching $10 million in FY26.

The dedicated city funding will leverage other affordable housing funding from state and federal governments to make possible the creation of 10,000 new income-based housing units over the next 10 years. That goal is a central tenet of the city’s Equitable Affordable Housing Plan, which Stoney said would be introduced to the council at its meeting Monday.

The Goochland County Planning Commission will hold a meeting at 7 p.m. Oct. 1. The full agenda can be viewed here. 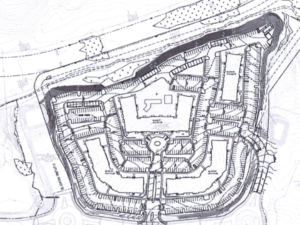 A site plan of the proposed Bristol Apartments.

Bristol Development Group has filed a request to approve a conceptual master plan for a proposed apartment complex called Bristol Apartments at Oak Hill in the West Creek Business Park. Bristol wants to build about 335 apartments on 18 acres north of Patterson Avenue and east of Route 288.

HHHunt Mosaic LLC filed a proposal to amend the county zoning ordinance to tweak the timeline on when sidewalks and street trees must be installed in residential developments. If approved, the amendment would make it so street trees and sidewalks would need to be installed prior to the issuance of a certificate of occupancy for an individual house.

Currently, street trees and sidewalks are required to be installed after the issuance of building permits for half of the lots in a given development. The change would affect all future residential projects in the county.

A public hearing will be held before commissioners vote whether to recommend the change be approved by the Board of Supervisors at a future meeting.

The Chesterfield County Board of Supervisors last week approved the use of $30 million in bonds to make improvements to roads and drainage systems throughout the county. The improvements come in response to flooding that occurred Aug. 15.

Much of the funding is earmarked for improvements to crossings on Otterdale Road, which frequently floods during heavy rains.

The county will develop an improvement plan it expects to share publicly by next spring. Construction of the improvements is expected to start in fall 2021. Public meetings will be held prior to the project.

The Hanover County Board of Supervisors last week approved a requested amendment to an existing conditional use permit to allow installation of solar panels on land between Kersey Creek Elementary School and Hanover Center for Trades and Technology. The solar panels will be used to power the trades center. 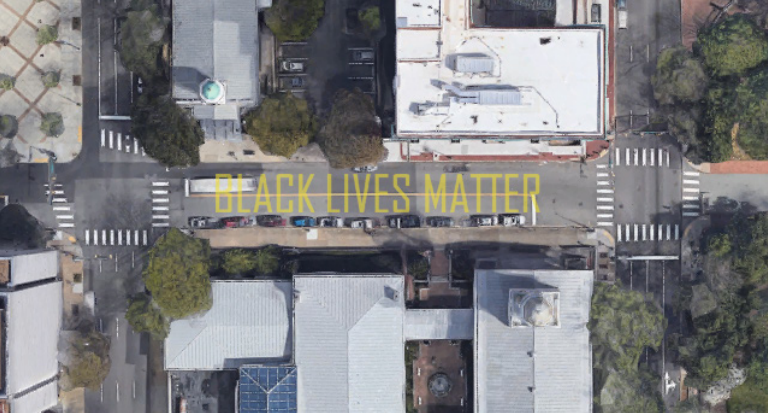 An image of how the proposed street mural would have appeared  from above. (Courtesy city of Richmond)

The commission had endorsed the yellow-lettered mural at a previous meeting but reconsidered after a closed session on the matter. A Times-Dispatch report said approving the mural could have obligated the city to approve other murals without being able to object to content.