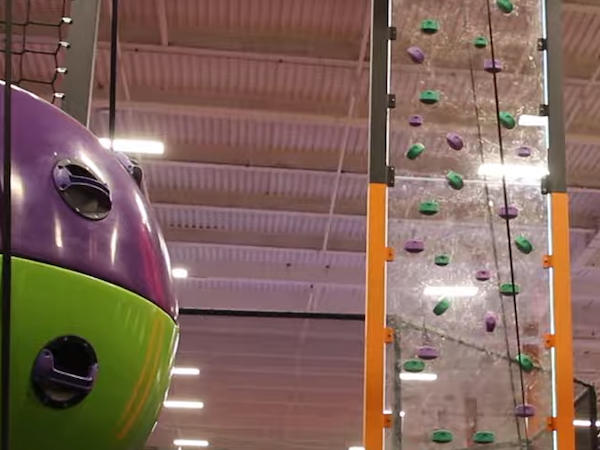 Surge Adventure Park will open in Regency on Saturday. The indoor park will feature climbing walls, trampolines, dodgeball and other activities. (BizSense file)

When Regency’s new indoor trampoline park opens, it’ll usher in a new stage in the metamorphosis of the West End mall.

Surge Adventure Park is expected to open Oct. 10 inside in the upper two-thirds of the mall’s former Macy’s North building. The park has taken over 42,000 square feet and is the first of a slate of new anchor tenants eyed to replace department stores that have since left the mall.

Alongside trampolines, Surge offers dodgeball, an arcade and other activities. It’ll be the first Surge in the Richmond area. Surge Entertainment and Adventure Parks, which counts NFL quarterback Drew Brees as a co-owner, has 14 current and upcoming locations around the country.

“It’s part of our transformation toward experiences and becoming a place for families and kids to do things the traditional mall setting isn’t conducive to,” said Steven Bonniville, president of Broad Sky Management, which manages Regency for owners Rebkee Co. and Thalhimer Realty Partners.

Surge will open at 50 percent capacity to deter the spread of COVID-19. Bonniville was bullish about the reception the park would receive, even in a time of pandemic. He said there’s high interest in the park on social media.

“We’re hopeful it is going to resonant with people quickly after it opens,” he said.

With Surge in place, that leaves one floor left to be filled in the Macy’s North building. The mall’s other former Macy’s building, which had been known as Macy’s South, is being transformed into a 50,000-square-foot indoor aquatics center for Nova of Virginia Aquatics. It’s set to open in summer 2021. The center will be used to hold swim meets, and it will feature a 50-meter pool and two 25-meter pools, creating a sports tourism magnet for the mall.

Rebkee and Thalhimer also are under contract to buy the mall’s JCPenney building, a 159,000-square-foot space that the ailing retailer plans to vacate by mid-November. That deal is expected to close in mid-to-late October.

Demolition of Regency’s former Sears building has been completed to pave the way for a 320-unit apartment complex. Site work has already begun. The first batch of 100 units is expected to be move-in ready in late 2021, with the rest of the development coming online by spring 2022. Bonniville described the apartments as “market-rate” but wouldn’t disclose specific rental rates.

CCM, Hourigan and Purcell are the contractors involved in the Regency project. Project architects on the mall’s reimagining are Baskervill and 2PA.

Other plans for Regency’s existing indoor space includes a redo of the food court, though exactly what that will look like hasn’t been determined.

Conversations are ongoing as to the fate of the former Forever 21 space. Bonniville said a tenant is lined up, but nothing has been finalized.

It will be interesting to see how it does especially with two larger, nationally branded trampoline parks already in RVA. Defy’s (old Jumpology) parking lot never seems to have more than 5-10 cars at any given time. And Sky Zone seems busier these days and has the national name recognition.