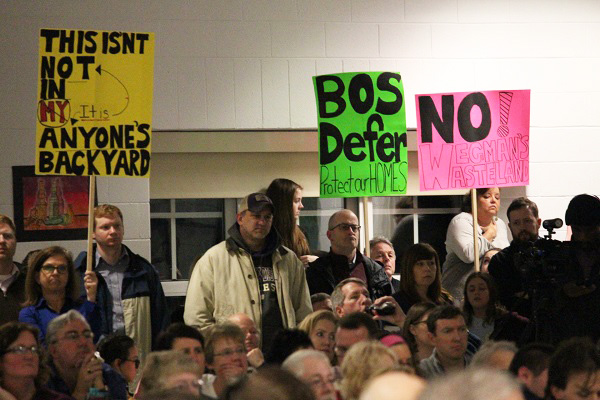 The first round in a legal fight over Hanover County’s approval of a planned Wegmans distribution facility and regional headquarters has gone to the county and the supermarket chain, though neighbors opposed to the project are getting a chance to fight on.

A judge last week threw out claims made in a lawsuit filed in June by a group of homeowners who argue that the $175 million project would adversely impact their way of life and property values. They also had challenged the county’s approval of the project in May, arguing that it violated public notice laws and state stay-at-home orders issued during the pandemic.

In his opinion letter, filed Nov. 9 and disseminated this week, Hanover Circuit Court Judge J. Overton Harris found that the group lacked standing to bring the claims as alleged and failed to plead a case that could be judged in a trial. Three of the eight counts alleged in the suit were dismissed, though Harris allowed the group to amend its case on the remaining five arguments. 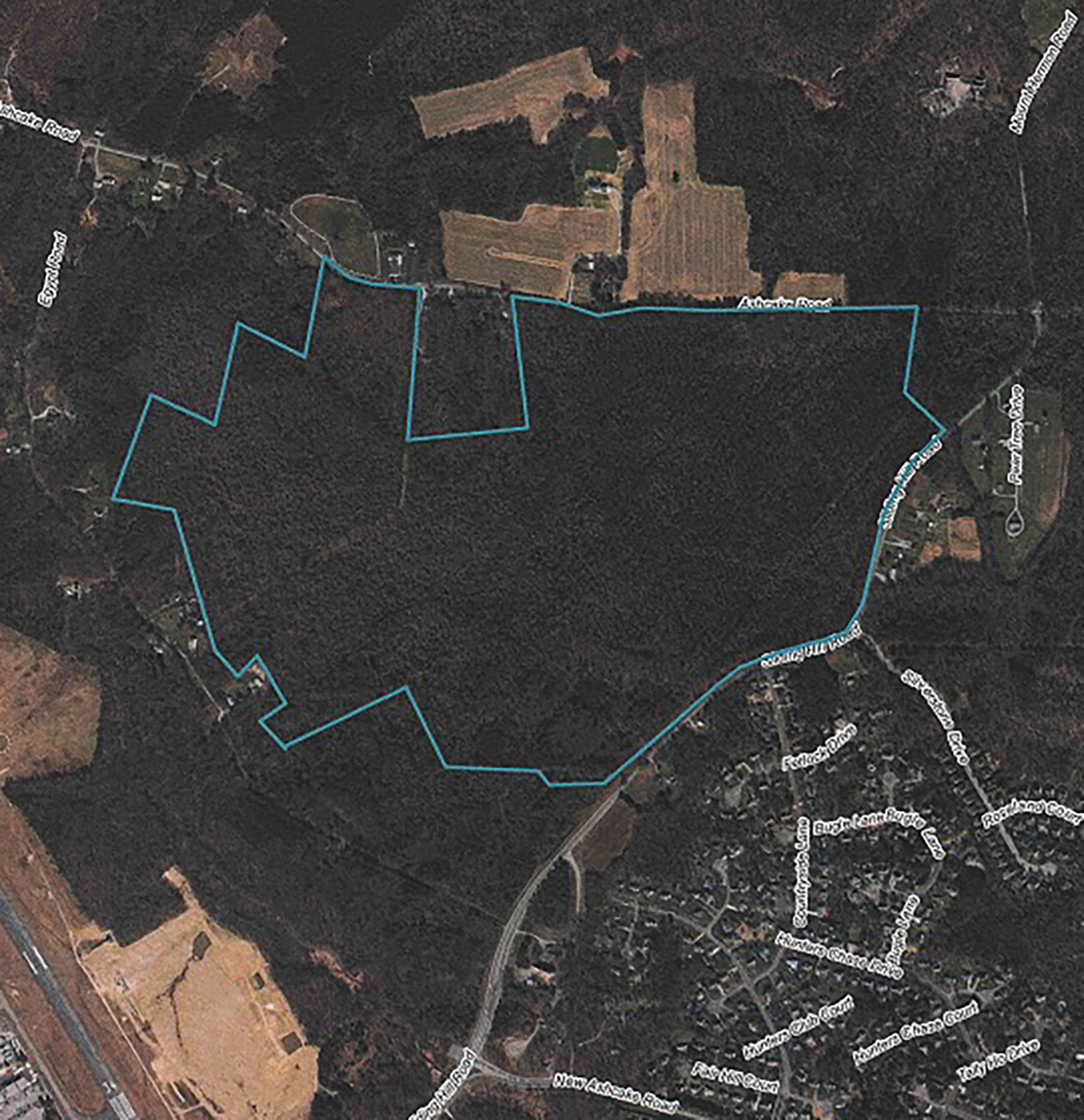 Brian Buniva, an attorney representing the homeowners, said Tuesday he hadn’t spoken with his clients about the opinion but would be determining with them if they will amend their complaint.

“That is certainly going to be something that we’ll seriously consider,” Buniva said, adding that the group’s attention has been focused of late on submitting comments to the U.S. Army Corps of Engineers on a wetlands disturbance permit needed for the project. The public comment period for the permit expired Monday.

He said the group is also preparing for a public hearing this Thursday on a draft water protection permit for the project. The State Water Control Board is scheduled to hold a virtual hearing at 7 p.m.

In their lawsuit, the group — Andrea and Roderick Morgan, Sandra Blose, Katherine Woodcock, and Timothy Miller — argued that the project would violate the Chesapeake Preservation Act by endangering plant and wildlife habitat, violate the county’s noise ordinance due to increased truck traffic, and constitute a public nuisance due to noise, light pollution and effects on property values.

Harris dismissed those claims, calling the allegations speculative in nature. He also cited case law requiring the group to show damages it would suffer separately from the general public, stating that the group failed to plead facts to that end in the lawsuit’s other counts.

The opinion allows the group to amend those counts, which relate to the alleged stay-at-home order and public meeting violations, among other arguments. The judge’s opinion requests that counsel submit an order reflecting his findings within two weeks. 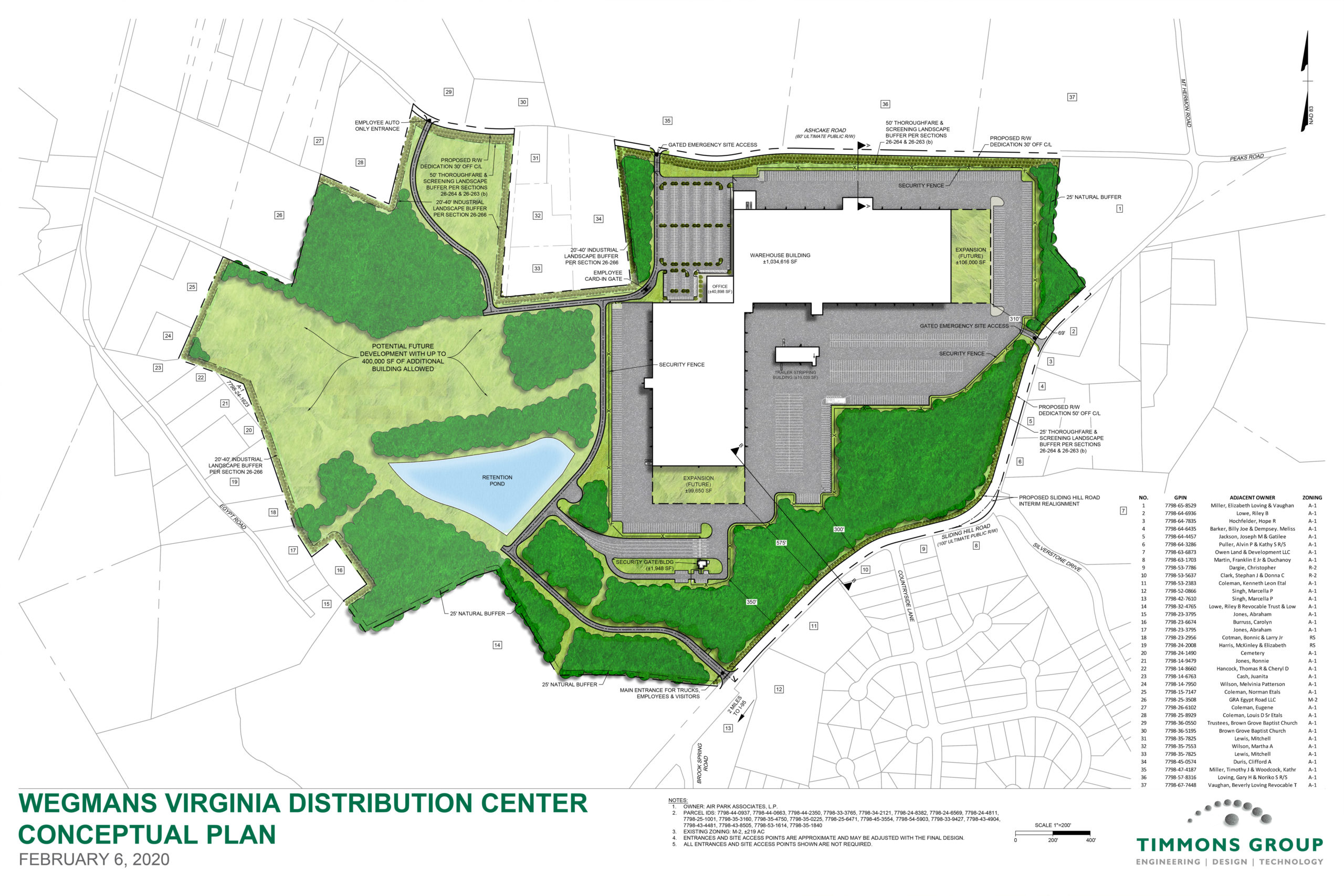 The 220-acre site east of the Hanover County airport planned for a Wegmans distribution facility and regional headquarters. (Courtesy of Hanover County)

County supervisors approved the project in May by a 4-3 vote, amid considerable opposition from citizens who expressed concerns in hearings and meetings about truck traffic and other impacts. A community meeting held in February at Oak Knoll Middle School saw hundreds of attendees, several holding signs opposing the project.

Wegmans is approved to build a 1.1 million-square-foot facility on about 220 acres just east of Hanover County Municipal Airport. The property is bordered to the north by Ashcake Road and to the east by Sliding Hill Road.

The project is expected to create 700 full-time jobs, 140 or so of which would be executive-level positions.

The company is set to receive $2.35 million in state incentives that Gov. Ralph Northam approved through a Commonwealth’s Opportunity Fund grant, which Hanover matched. The county also is allocating $1.5 million for infrastructure improvements to accommodate the project, including utilities and transportation upgrades.

Supervisors voted earlier this year to restrict truck traffic on four roads, including Ashcake Road. Opponents maintain that the site and area roads cannot handle the project and its anticipated truck traffic. They also argue that the project would adversely impact neighboring communities that are largely African-American.

“There’s a lot of folks opposed to this project at this location,” Buniva said.

An image of an existing Wegmans distribution facility. (Courtesy of Hanover County)

But opponents are against the site, not the project, he said.

“We’re not opposed to (Wegmans) having a food distribution center,” he said. “We just think you chose a terrible site, right in the middle of an African-American community, right in the middle of a densely populated residential community on roads that are inadequate, and that will create a major disruption to the way of life of the people that have lived there for many years.

“We would love to help them find a site that is more suitable. In fact, we could become their allies,” Buniva said. “It doesn’t have to stay as adversarial as it has become, if they would simply take our extended hand to try to find a different site.”

Wegmans is represented in the case by Joseph Bowser of Roth Jackson. Air Park Associates LP, which owns the project site, is represented by Courtney Moates Paulk and John O’Malley with Hirschler. County Attorney Dennis Walter is representing Hanover County in the case.

We see time and time again business growth opportunity trumps respecting the environment, the neighborhoods and communities they claim to serve. Just take a look at Dominion and the MVP for example. These expansions seem to always infiltrate areas where a certain demographic preside.
Thanks for the coverage. Many refuse to accept the realities we experience because money can be blinding.

People need to eat though, don’t they? It’s not some frivolous business going there, it’s a grocers distribution center. If the NIMBYs always won we wouldn’t have the staple essentials required to survive or anywhere to live.

Now I would have to take the people’s side on this. The reason being is people move to the country to get away from the hustle and bustle of big businesses coming in to take up a lot of land. They want peace and quiet that’s why they moved there. And if the people don’t want Wegmans to come in then the govt of Hanover should take the people’s side if there is enough participation. Just my thoughts on this issue.

I tend to disagree that the distribution center is inappropriate for the area. Just to the west is the airport and light industrial area. Looking at Google maps, this fits perfectly into the area bounded by I-95, and Routes 656 and 657. I can’t imagine it will be any more disruptive than the current noise from the airport.

This Distribution Center will be much more disruptive than the airport as it will operate 24 hours a day, 365 days a year. There will be no break from truck traffic, noise, and light pollution, ever. This will be one of the tallest and largest buildings in Hanover. It’s not just in someone’s back yard but located next to the homes of a third of Hanover’s population. It will decimate the historic African American Brown Grove community which was founded by freedwoman Caroline Morris 150 years ago. It will destroy more wetlands than any other development in Virginia in the… Read more »

“To get away from the hustle and bustle”. This is not exactly the “country”, with Kings Charter, Ashcreek, Milestone, etc with many 1/4 and 1/3 acres lots and 1000’s of cul-de-sac homes. One could argue that those people living in those neighborhoods are the cause of the current “heavy traffic” they are worried about getting worse. I used to work in this area 25 years ago and there was almost no traffic on Sliding Hill Road other than as rush hour. The Industrial Airpark 1/2 mile away preceded all of those neighborhood’s. The land on the north side of the… Read more »

Please tell me what year Fox Head was built. And let me know what year the property was zoned industrial. Hint: the industrial land wasn’t there first.

Since that’s your issue, I’m sure that I just changed your mind on the whole issue!

11,000+ residents will be adversely impacted by this 24/7 truck stop (essentially what it). Yes, we need distribution centers. But there is a place for everything…this is clearly the wrong place.

I’d like to see the math on the “11,000+” residents that will be adversely impacted.