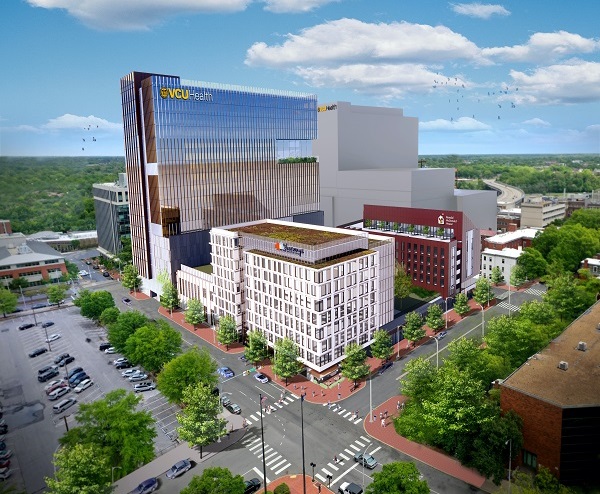 A rendering of the proposed office tower and complex that would replace the Public Safety Building. (Courtesy of Capital City Partners)

More signs are pointing to a prospective sale of city property for a $350 million development that would salvage part of the failed Navy Hill plan.

Capital City Partners, the developer behind a proposed 20-story tower and mixed-use office complex on the site of the downtown Public Safety Building, last week submitted a request to the city for a zoning confirmation letter for the 3-acre property at 500 N. 10th St.

The request, commonly made for commercial properties in advance of a pending sale, is the latest signal that the proposal is progressing since it was made through an unsolicited purchase offer last May. A staff description of the request, which is listed in permit filings as under review, states the letter is for a “City property land sale.”

The application was submitted by CCP principal Michael Hallmark, who described the letter as one of several checklist items that the group is working through in preparation for a sale. He said negotiations with city administrators remain active and that results from those efforts are “fairly imminent.”

“We just wanted to get that off our checklist,” Hallmark said of the zoning confirmation. “We’re still in our agreement negotiation phase with the city. We’re getting closer, but we’re not quite done yet.”

Economic Development Director Leonard Sledge, who’s been representing the city in the negotiations, said those talks are in the home stretch and that a formal proposal could be presented to the City Council soon.

“We hope to conclude those negotiations in the coming weeks, with the hope of introducing those documents to City Council,” Sledge said.

Negotiations have been underway since last summer, when Sledge and other administrators told the City Council of their desire to enter into talks with CCP. A formal authorization from the council was never made, but Sledge said this week that no objections were made either as staff has updated the council over the past several months, including in a closed-door meeting last fall. 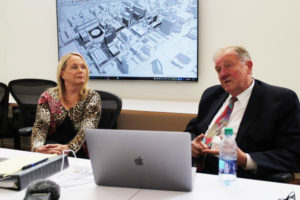 CCP – led by Hallmark and Susan Eastridge, the development team behind Navy Hill – had offered to pay about $3.17 million for the Public Safety Building site, which is bordered by Ninth, 10th and Leigh streets and the Department of Social Services building on East Marshall Street. The purchase amount was based on an appraisal by CBRE, which put the land value of the site at $8.5 million once it’s made “shovel-ready” after the existing structure is demolished.

Because CCP’s offer assumes it bearing the costs of demolition and infrastructure improvements to ready the site, as well as to extend Clay Street between Ninth and 10th streets, estimated values of that work were deducted from the $8.5 million land value, resulting in the proposed $3.17 million purchase price.

CCP would fill the site with a mixed-use office complex highlighted with the 20-story, VCU Health-anchored tower. Totaling 545,000 square feet, the proposal is a variation of what was known as “Block D” in the Navy Hill project, but with the taller tower that would accommodate an additional 150,000 square feet of Class A office space. 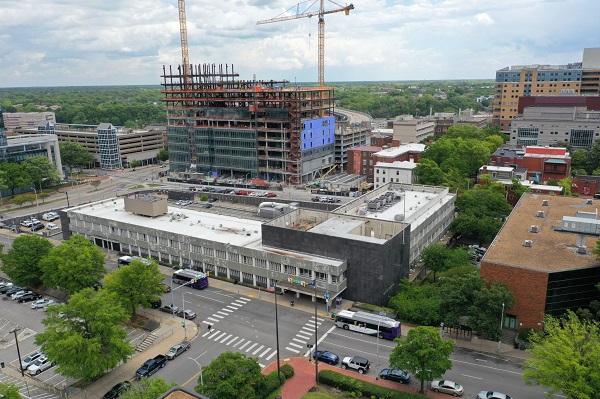 The Public Safety Building as viewed along Ninth Street last year, with the under-construction VCU Health outpatient building rising behind it. (Courtesy of Capital City Partners)

While VCU Health is signed on as a primary tenant, the additional office space would be built on spec with a goal of attracting new business to Richmond. The rest of the tower, totaling 300,000 square feet, would house administrative and office space for VCU Health designed to support the Adult Outpatient Pavilion building under construction next door, as well as the health system’s nearby Children’s Hospital Pavilion.

When a council majority voted down Navy Hill last year, they adopted a resolution calling for certain steps to be taken that would lead to a formal request for proposals to develop the city-owned properties involved. Those steps, which included since-conducted appraisals, as well as development of a Coliseum-area plan with “robust” public involvement, were to be taken before the city solicited other proposals through an RFP.

While the Public Safety Building site is included among those properties, Sledge said the resolution did not mandate an RFP and that such a request is not required to consider CCP’s offer, which the city received unsolicited.

Sledge pointed to a resolution the council adopted last June declaring the Public Safety Building site as surplus property. The resolution states that the surplus property designation is “for the purpose of facilitating the purchase and development” of the site, but it goes on to say that it authorizes administrators “to seek proposals” for the property, whereas CCP’s proposal was already received.

Sledge also noted that the final report from the Navy Hill Development Advisory Commission recommended making the Public Safety Building site “available for sale to a private party for use by VCU hospital…as contemplated in the Navy Hill project.”

He also noted that public feedback in a Richmond 300 meeting and online survey showed a majority of respondents considered the CCP proposal an appropriate use for the site. 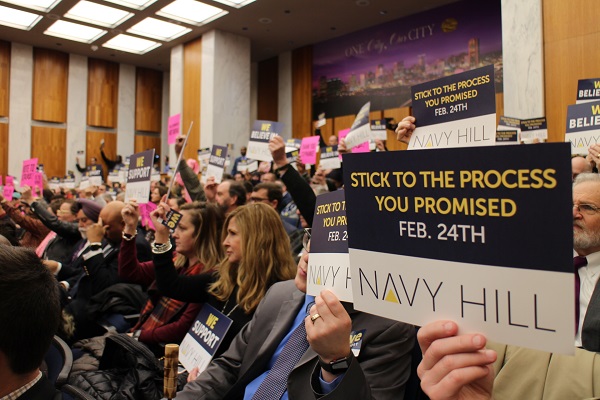 Attendees at a Navy Hill public hearing raised signs for and against the project ahead of the City Council’s vote last year. (BizSense file)

“The unsolicited offer received from Capital City Partners to redevelop the Public Safety Building site was shared with City Council,” Sledge said in an email. “Upon review of the unsolicited offer, the Administration thought the proposal had merit to create a higher and better use on the site and generate real estate tax revenue for the City.

‘We are where we are’

Councilmember Kristen Larson, who helped draft the resolution that preceded Navy Hill’s demise, acknowledged that it didn’t require an RFP but maintained that the process was “strongly suggested.”

Since then, however, Larson said the council has received the requested appraisals from staff and been updated on the project to her satisfaction. But she maintains that the rest of the Navy Hill properties should not be pursued for development without an RFP process and an area plan in place.

“I feel like we are on a better path than we were six months ago,” Larson said, adding that CCP has listened to the council’s concerns and provided additional details.

“I will say, with this particular building and with this particular project, I do feel that some elements of the project definitely support a lot of public needs and health needs,” Larson said. “Ideally, it should have been put out for RFP just like the resolution recommended. We are where we are, and I do think there are a lot of good pieces to this project, and a lot of the folks that are involved in it will provide needed services to our health community.

“I am hoping we see RFPs for the rest of the properties, per the resolution,” she said. “There was a reason that resolution was put together and why it was voted on by a majority of council, so I hope that they continue to refer back to it, because that was not thrown together overnight. That was put together with input from several different councilmembers who supported it and a lot of thoughtful approaches to how to correct this process.”

While Hallmark and Eastridge continue negotiations with the city, they are also planning another arena-anchored development in the wake of Navy Hill: the proposed GreenCity development in Henrico County. Hallmark, of Richmond-based urban planning firm Future Cities, and Eastridge, of Fairfax-based development firm Concord Eastridge, received the county’s endorsement of that $2.3 billion project in December.

Sell them the site, let them do the demolition, then use their money to pay them to demolish the Coliseum eyesore as well. They’ll do it at half the cost it’ll be for the taxpayers. Then, take the cleared coliseum site to the market for RFPs. It’ll be worth so much more to the private sector once this other planned development is off the ground. Theres never been a reason for the City to saddle its taxpayers with the risk of a TIF financed bond to build a $200MM coliseum that would be a white elephant within 25 years. Let… Read more »

hear hear. At this point the city just needs to get out of the way, and monetize things.

looks like a good project, let them get it done. No more RFPs or grand plans, those achieve nothing. Put it out there and let people build. The city needs the money, and the area needs the vibrancy