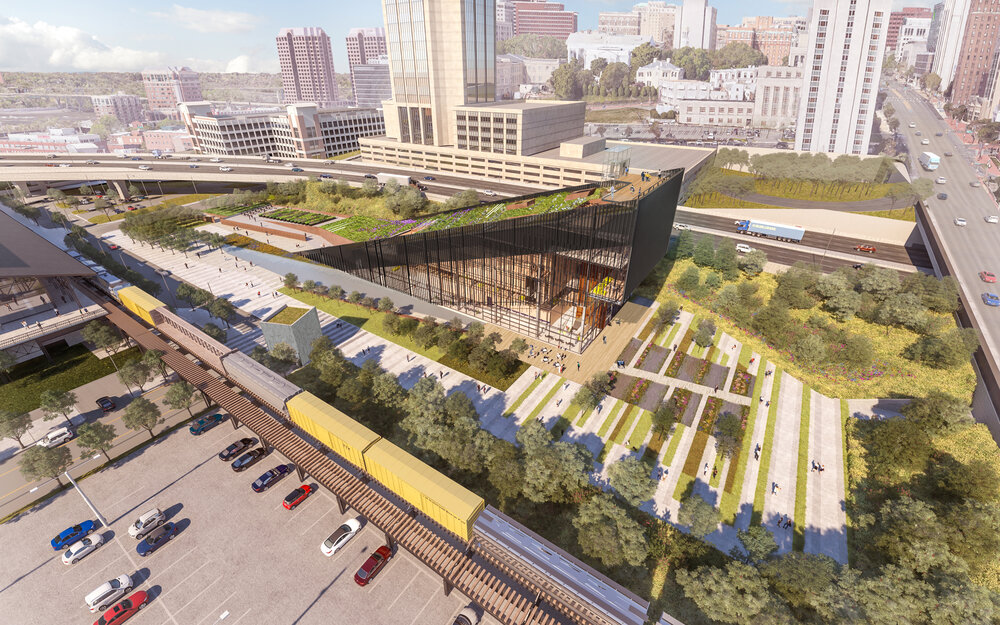 A rendering of the slavery museum planned between the train tracks and the interstate. The Loving-owned land is east of the tracks. (Courtesy of SmithGroup)

The family whose land holdings are at the center of a planned slavery memorial and museum in Shockoe Bottom say they are not opposed to the project or to selling their land for it, but rather to the prospect of the city acquiring it through eminent domain.

That’s according to Stephen Clarke, an attorney for the family of Harry and Betty Loving, whose properties generally east of the Main Street Station train shed are being targeted by the city for its planned Enslaved African Heritage Campus, a years-in-the-making commemoration site that has received funding boosts from the city and state in recent months.

Last week, the Richmond City Council authorized staff to proceed with acquiring the 12 parcels needed — a process that involves conducting appraisals of the parcels, negotiating a sale and, if negotiations aren’t fruitful, potentially taking the properties through the city’s eminent domain powers.

Staff has said the latter action would be a last resort and that the city intends to negotiate a transaction based on the properties’ fair market value. But Clarke, who spoke against the authorization prior to the council’s vote, maintains that the inclusion of the eminent domain clause, as well as a lack of notice from the city, has started any talks off on the wrong foot. 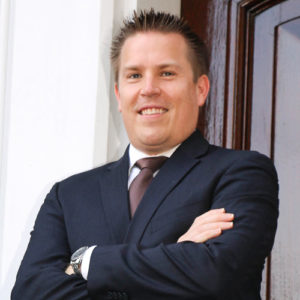 “The Lovings aren’t opposed to the memorial. What they’re pushing back against is this complete lack of communication from the city,” Clarke said in an interview last week.

“Approving the use of eminent domain really puts this cloud over any subsequent discussions, because if the city doesn’t like what the Lovings have to say, they can simply cut off negotiations and proceed with taking the property.”

Clarke — a partner with Norfolk firm Waldo & Lyle, which focuses on eminent domain law — spoke with BizSense in the days following the council’s approval to proceed with the acquisition, reiterating comments he made prior to the vote and clarifying other points.

Those include the Lovings’ desired use of the land that once was home base for Loving’s Produce Co., the family business that ended operations last year after a nearly 75-year run. 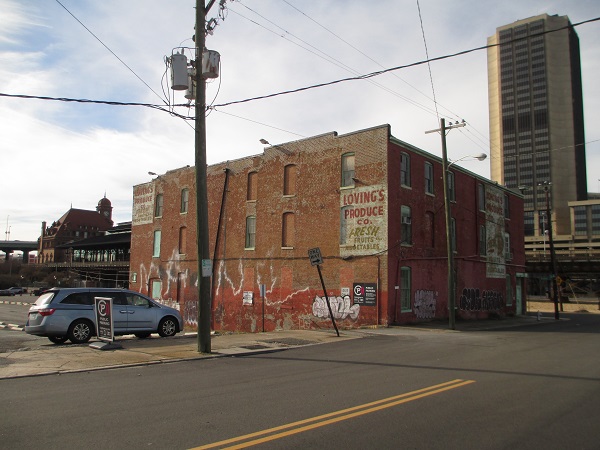 The properties near Main Street Station planned for a slavery commemorative site include the old Loving’s Produce building. (BizSense file)

While the mostly undeveloped properties are currently used for public parking, including for the Havana ’59 restaurant in one of the family’s nearby buildings, Clarke said the Lovings have fielded offers from private developers over the years, including a hotel, parking garage and a downtown-area grocery store.

Most notably, the land was once eyed several years ago for private development tied to a proposed baseball stadium. Other land the family owns on the north side of Broad Street is currently being positioned for a mixed-use development that could include a grocery store.

While the family is open to selling to the city, Clarke said, “As a matter of general principle, the Lovings would like, as most people would, to be able to control the use of their properties. If they want to proceed with developing it or getting a partner involved in developing it with them, they want to be able to do that, and obviously the city’s acquisition will forever cut that short.”

The 12 parcels totaling about 1.75 acres are within two blocks otherwise controlled by the city, which most recently assessed the parcels collectively at $2.4 million. Those blocks would be used as an archaeological site and house the slavery memorial and other campus features, according to a conceptual plan of the project. 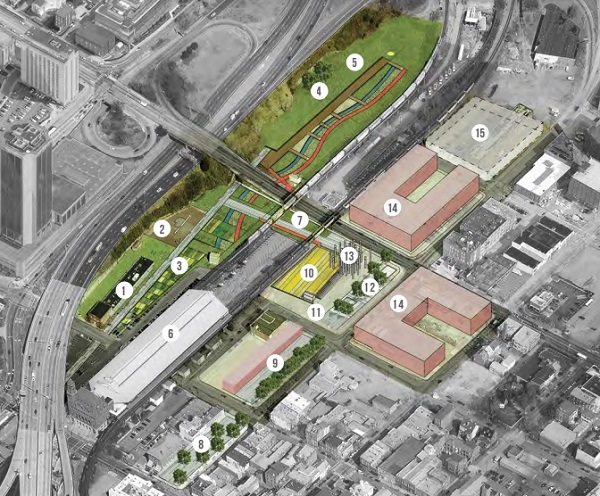 A conceptual site plan from a 2016 proposal shows the memorial park along the interstate and the museum and other features that would fill the rest of the campus. (Courtesy of The Center for Design Engagement)

While the idea for a site to commemorate the nation’s second-largest slave market has been tossed around for years, momentum for it has increased with recent funding commitments from the city and state.

Last July, Mayor Levar Stoney said Richmond would commit between $25 million and $50 million for the campus project through a budget amendment in the city’s five-year capital improvement plan. And in December, Gov. Ralph Northam announced that the state would commit $10 million toward the effort.

The city’s project fund was established with an initial $1.7 million earlier this year, and additional allocations are expected in future city budgets. Stoney said $3.5 million would be invested specifically in a planned memorial park, and the campus also would include a slavery museum and encompass sites such as the Lumpkin’s Jail/Devil’s Half Acre site and the African American Burial Ground.

Administrators have pointed to those announcements as reasons why the Lovings should not have been taken off-guard by the city’s acquisition proceedings. Clarke disagreed.

Clarke reiterated that the Lovings were not notified by the city and only learned of its intentions to acquire the land from an article in BizSense. He said the family’s reception to the proposal could have been different if it had heard about it from the city directly. 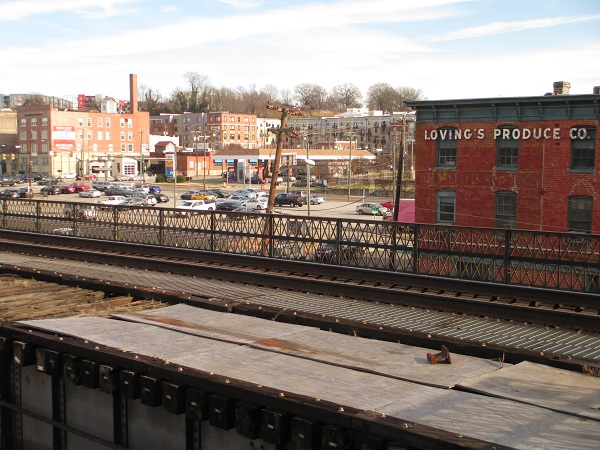 The properties, as viewed from the train shed platform, are currently used as parking lots. (BizSense file)

“I think communication from the city could have gone a long way before this happened,” Clarke said. “My experience is that that kind of communication goes over so much better than just laying down an ultimatum and coming to negotiate with a property owner with this ace up your sleeve.”

Jim Nolan, a spokesman for the city, said notice to property owners of a pending acquisition authorization is decided on a case-by-case basis with consultation from the city attorney’s office, which recommended against notifying the Lovings in this case.

He said the office advised obtaining the council’s authorization first, and then securing fair market appraisals, before pursuing acquisition and reaching out to the Lovings or their representatives.

“Now that the City Council has authorized the administration to purchase these 12 parcels, we will move forward with contracting for fair market appraisals for each of the 12 parcels before reaching out to the Loving family, their attorney or broker to discuss the purchase of the land,” Nolan said in an email. “The city looks forward to reaching an amicable, negotiated sale of the properties sometime this year.”

Asked if the Lovings remain open to selling despite the lack of notice, Clarke said, “I think they are. But the dynamic changes significantly once the city invokes this power of eminent domain.

“It’s one thing to have two equally-footed entities or individuals who are simply negotiating over a land deal or the sale of some property. It’s another thing to have one of those entities having this power of eminent domain in their back pocket. That’s what really frustrates the Lovings,” he said.

“If the city moves forward with this acquisition, as they’ve indicated they’re going to do, the Lovings obviously intend to be involved at every step, and they want to make sure that their rights are fully and fairly protected — both that the condemnation is appropriate and, as it moves forward, that obviously they’re fully compensated.”

Invoking eminent domain for a museum, as the city is threatening to do in this instance, is entirely illegal. Whoever is advising the city on this must have been absent the day they taught law in law school. All the leverage lies with the Loving’s in this case because the city showed their cards and revealed how badly they wanted this parcel. That’s called poor business, not surprising considering who we’re talking about here. If the city wants it then their going to have to pay the Lovings what they want for it. The city won’t be their only offer.… Read more »

Like it or not, the process is playing out.

Great project. This is the kind of projects and spaces the city is claiming, we need more museums, parks, amenities. This kind of projects make the city beautiful and attract tourists, we must move forward!
Hope the owners are well paid as well.

That is all well and good, but you don’t forcefully take people’s property to do such things.

They are not doing anything forcefully (per my understanding), but they should pay them well for that great location. Remember public interest prevails over private interest according to the constitution.

Luis, there is only one reason that the city would mention eminent domain in last week’s paper, “Clarke called on councilmembers to deny a requested public necessity declaration that authorizes the city to acquire the properties, and also mentions the possibility of eminent domain in the event of a non-agreement. But the council approved the declaration after hearing from Sharon Ebert, the city’s deputy chief administrative officer for economic development and planning.

A public use is such a thing. Personal opinion is subject to debate.

Agreed. A parking lot is not an amenity worth defending. A win win is possible.

I’m torn on the eminent domain topic. But it is important to note that the Lovings have done nothing with this property for decades. That may be fine if you have a parcel in a remote or undesired area. But when its downtown next to a train station and a restaurant row your holding the city back and your imposing negative externalities upon the surrounding landowners… Secondly there is an argument this museum can’t just be put anywhere. It will carry the most impact if it is one the grounds of the old slave trade area than if it were… Read more »

The city doesn’t actually need the Loving’s property to achieve their goals of a museum with national and even international significance. The proposal for that entity is self contained within property that the city already owns. It’s the “memorial park” part that is pushing beyond that boundary (which is a separate initiative). This type of museum is needed and deserved. The city should keep their money and put it towards that, in lieu of purchasing private property. This has to potential to lift the economic value, and culture significance of the entire Bottom!

The idea of this museum is fine. Eminent Domain aside, how it will be paid for it is a honest question. “Last July, Mayor Levar Stoney said Richmond would commit between $25 million and $50 million for the campus project through a budget amendment in the city’s five-year capital improvement plan. And in December, Gov. Ralph Northam announced that the state would commit $10 million toward the effort.” The money will come from increased taxes. City taxpayers are already on notice via hiked property values. Surely some sort of other hidden tax to take care of the damage done by… Read more »

Fundraising of private dollars will inevitably be required to raise the majority of the needed funds for a project like this. Tax payers shouldn’t be saddled with everything. What’s the operational plan, is the real question, to keep it going? Will it be a city/state venture, or a private entity?