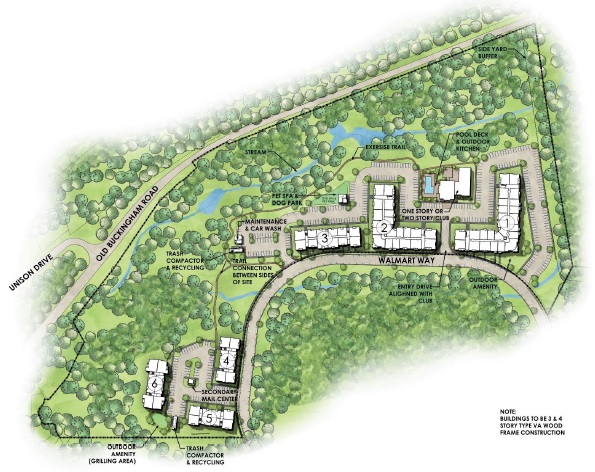 An apartment complex planned behind the Walmart and Sam’s Club off Midlothian Turnpike is slated to bring that commercial area full circle — literally.

A Richmond-based developer and property owners involved are seeking zoning approval for a 310-unit complex on part of a 26-acre tract between Walmart Way and Old Buckingham Road.

The development, called Coalfield Reserve, would extend and connect the two northern ends of Walmart Way, completing the planned loop road that would encircle The Shops at Stonehenge retail strip and a Dominion Energy power station.

Requesting the rezoning are Coalfield Reserve LLC, an entity owned by Richmond resident William Randolph Cosby IV, and property owners Felecia Diggs, Keith Diggs and Jeanne Stigall. Stigall owns the bulk of the land involved, which consists of eight parcels most recently assessed by the county at $720,300 collectively.

Hirschler attorney Jeff Geiger is representing the parties in the case, which went before the Chesterfield County Planning Commission on Tuesday.

The commission recommended approval, and the case now goes to county supervisors for a final vote at their Feb. 24 meeting.

The proposed apartment buildings would vary between three and four stories.

Plans filed with the county show the apartments would be grouped in three four-story buildings north of the power station and three three-story buildings clustered closer to the Walmart.

Geiger emphasized that much of the 26 acres involved would not be developed.

“We were very intentional in having our development focus on Walmart Way and to leave those trees as a large buffer area against Old Buckingham,” Geiger said. “It benefits the neighbors across the street, but we really think it’ll set this project apart by providing a natural setting that will attract residents.”

A 5,000-square-foot clubhouse with a pool and outdoor kitchen would be grouped with the larger buildings, and other planned amenities include grilling areas, a pet spa and dog park, a car washing and maintenance area, and trash compactors and recycling facilities.

Units would range from 800 to 1,400 square feet with primarily one- and two-bedroom floorplans. Geiger said the units would be market-rate with rents likely starting at $1,200 per month.

The development would be built in three phases from east to west. Building facades would include brick, stone, wood and vinyl siding. Housing Studio, based in Charlotte, North Carolina, is designing the development, and Midlothian-based Balzer & Associates is the engineer.

Geiger said a contractor has not been selected and a development cost has yet to be determined.

County planning staff is supportive of the project, which is deemed to be consistent with Chesterfield’s comprehensive plan that calls for high-density residential in that area. A staff report states that nearby property owners were notified of the case and that concerns expressed included downstream stormwater runoff, noise, light impacts and trash from the development.

Geiger said those concerns have been addressed in the proposal, which he said has received multiple letters of support from community members heading into the hearing.

“The comp plan calls for this,” Geiger said last week. “We think that using this land to create a mixed-use area that provides different types of housing, along with the commercial on the frontage, really achieves that synergy of uses that the county is looking for and encourages more mixed-use development.”

The apartments wouldn’t be the first multifamily residential development on Walmart Way. StyleCraft Homes built its Hartford Hill Townes development on the east side of the loop in recent years.

Nice work, Randy and team. Looks to be a great location.

its essential that this development not exit onto Old Buckingham Rd. this looks to be a great land plan. lots of open and wooded space. they are to be congratulated.