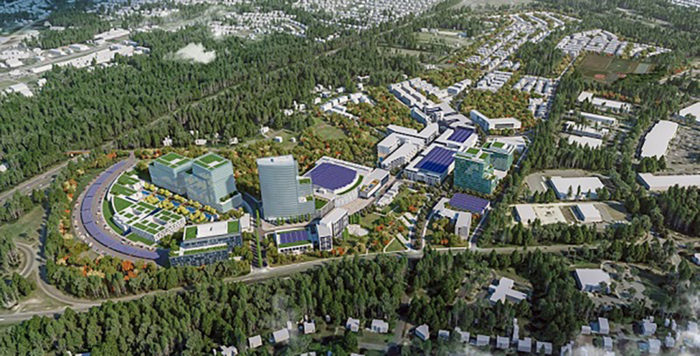 With a pair of procedural approvals, Henrico County has taken its first step down the proverbial yellow brick road to GreenCity.

As they said they would do when they announced the $2.3 billion arena-anchored development in December, Henrico supervisors last week approved a transfer of the county-owned Best Products site to Henrico’s economic development authority, which will negotiate a sale of the 92-acre site to developer GreenCity LLC.

The EDA board voted two days later to accept the transfer, directing Executive Director Anthony Romanello to proceed with a memorandum of agreement for disposition of the property. The EDA would then begin negotiations, though the county has already said its preferred sale price: $6.2 million, the amount it paid for the property in 2011.

The approvals mark the first procedural steps toward the realization of GreenCity, a so-called “ecodistrict” village proposed to span 200 acres northeast of the Interstate 95-Parham Road interchange. The rest of the land, located to the north and known as Scott Farm, would be purchased from Bill Goodwin’s Riverstone Properties, which bought its land in 2015 for more than $6.4 million. 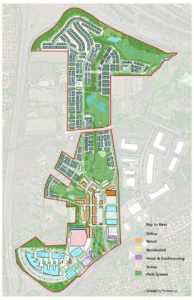 The development would be anchored by a $250 million, 17,000-seat arena and include 2.2 million square feet of office space, 280,000 square feet of retail, two 300-room hotels, green space, and up to 2,400 residential units. The arena, the first hotel and other initial development are targeted for completion in 2025, with full buildout anticipated in 2033.

Behind the proposal are Michael Hallmark and Susan Eastridge, the development team that designed the former Navy Hill plan in the city of Richmond. Hallmark is a principal with Richmond-based Future Cities and has designed multiple arenas across the country. Eastridge is CEO of Concord Eastridge, a Fairfax-based firm that focuses on public-private and mixed-use developments.

GreenCity also would be designed around a planned extension of Magellan Parkway that would bisect the project and run across I-95 via a new bridge. The development would not involve Saint Gertrude High School’s Outdoor Athletic Center, which borders the Scott Farm property.

Once the Best site is acquired, the developer would then submit a rezoning application to the county with a master site plan and design pattern book, as well as assessments of the development’s impacts on traffic, schools, county services, the environment and fiscally. 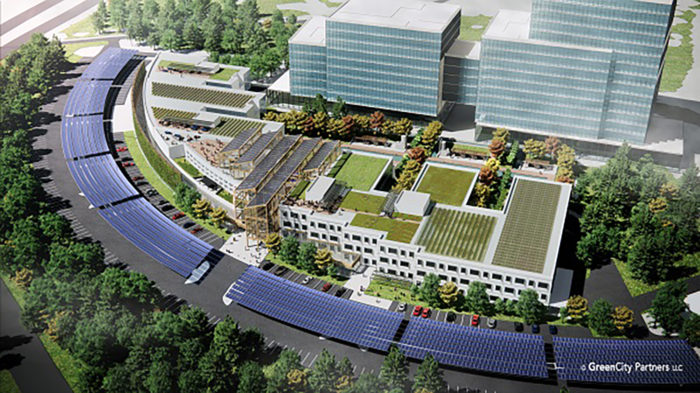 The existing Best Products building would be repurposed as a so-called “living building” with sustainable development features such as solar energy panels.

The county would review those documents and hold community meetings and public hearings, a process that Planning Director Joe Emerson said could take six months to a year to complete.

In a recent Fairfield District meeting about GreenCity, Emerson said a 170-page master plan document for the project has been drafted and is expected to be submitted soon. If the zoning is approved, then comes plan of development review, which Emerson said could take another six months.

“If we had an application filed today — and we don’t right now, although we anticipate it may come soon — we would be a good 18 months away from an actual shovel in the ground, because all of these topics have to be addressed,” Emerson said.

Other steps to be taken this year include establishment of a community development authority (CDA) for the project site that would generate tax revenue to support the development as it progresses, expected over a period of 10 to 12 years. Henrico has used CDAs for other developments such as Short Pump Town Center, White Oak Village and Reynolds Crossing.

Thirty-year bonds used to finance GreenCity would be paid off with tax revenue from the development’s initial phases, as well as from revenues generated from the arena. The scenario is different than Navy Hill, which hinged on taxpayer support through a proposed tax-increment financing district.

Romanello said the CDA for GreenCity would be introduced after its zoning is approved, potentially as soon as this fall.