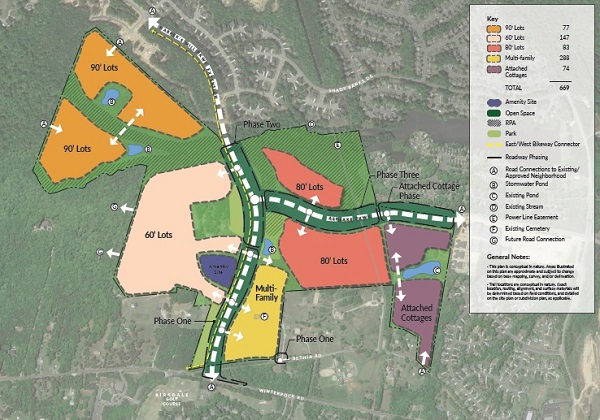 A site map of the development shows the planned extensions and connection of Harpers Mill and Ashlake parkways. The map is oriented with north pointing to the right. (Courtesy of Chesterfield County)

A residential development that would add hundreds of homes in Chesterfield’s fast-growing Winterpock area is finally getting its day in front of the county Planning Commission, three years after it was initially proposed.

Homebuilder Schell Brothers, which in 2018 filed plans with the county for more than 500 homes on 218 acres off Winterpock Road, has since expanded the proposal to nearly 670 homes on 250 acres between the Harpers Mill and Collington communities.

The larger project includes additional parcels and more than $5 million worth of offsite road and infrastructure improvements that were not part of the original plan, which never went before the commission for formal consideration after being deferred from an agenda in mid-2018.

Preston Lloyd, a Williams Mullen attorney representing Schell Brothers on the project, said the time since has been spent addressing concerns from the county that resulted in the proffered improvements, which would include planned extensions and a connection of Harpers Mill Parkway and Ashlake Parkway in the heart of the development.

“It took a little while to figure out how we could solve all those issues,” Lloyd said Monday. “All those things have come together nicely to the point where we’re satisfied that we can move this forward to a public hearing.”

Lloyd said the properties needed to connect the two roads — identified in the county’s Thoroughfare Plan as major arterial roadways — were not under Schell’s control when it filed its previous rezoning application.

“Figuring out how we could provide the connection between those, but also have sufficient density to spread those costs over, led to a lot of back and forth with the county,” he said. “Ultimately, we got to a place where we think, and the county agrees, that we’re satisfying the county’s current cash proffer policy by taking a credit for the off-site improvements that are being provided by the project.”

“It’s the same property, same applicants, same case,” Lloyd said. “It’s just been a circuitous process to get to this stage.” 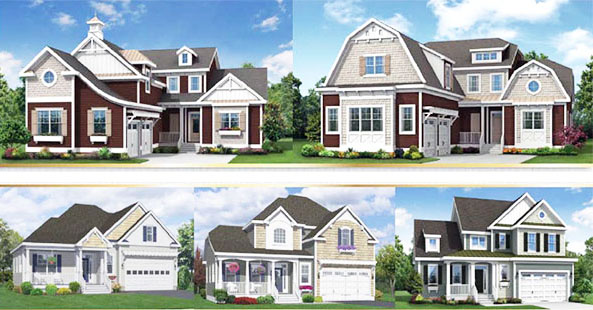 Now planned to total 669 units, the enlarged development — referred to in county documents as the “Fuqua Site” — would consist of 307 single-family lots, a 288-unit apartment complex and 74 attached cottage-style homes, along with parks and green space, an east-west bike path connector, and a 2,500-square-foot clubhouse, among other amenities.

Home prices would start in the mid- to upper-$300,000s for the attached cottages and mid-$400,000s for the detached houses, which would be similar to homes that Schell has built in Magnolia Green’s Palmilla section. The single-family homes would have a minimum of 1,500 square feet and be grouped in neighborhoods based on lot sizes ranging from 60 to 90 feet in width.

While the houses would vary between 20 different models, each with four to five façade design options and other customizations, the attached homes would be a new product for Schell in the Richmond market, said Tricia Smith, the company’s division president.

Smith, who previously shared that role with former executive Shane Burnette, presented the latest version of the project with Lloyd in a community meeting held over Zoom in December. She said the development would add to 175 homes that Schell has built locally since entering the market in 2016.

Burnette, who was integral in bringing the Delaware-based builder to Richmond, is no longer with the company after parting ways last summer. He said the split was a mutual decision that’s allowing him to focus on apartment developments associated with the company.

While the Winterpock development would extend and connect Harpers Mill and Ashlake parkways, Lloyd said it would not connect with nearby Bethia Road, a smaller road that’s the street address for the parcels involved. 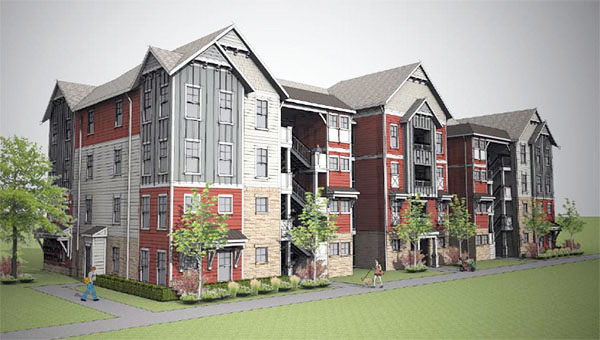 A rendering of the apartments planned for Schell’s new residential community.

Lloyd said a transportation impact analysis submitted with the plans shows that the development would generate just under 5,000 vehicle trips per day. He also noted that the county is planning a new elementary school in the area, scheduled to open in 2026, that he said would help mitigate impacts on the county school system.

“More so than most projects, this project is going to help unlock the major transportation improvements that are being provided by the development and not by the county, so the taxpayer won’t foot the bill for those,” Lloyd said.

“Yes, it does represent new houses and a new community coming into an area that continues to grow, but the transportation improvements that are going to accompany this community are really quite substantial and of an order of magnitude that makes it a little bit unusual. They’ll benefit not just this specific community but those in the vicinity.”

Should the project receive approval, Lloyd said construction on the first homes could start in two years, with total buildout taking about six and a half years. He said buildout is projected to increase the county’s real estate tax revenue from the properties from about $6,000 annually to nearly $1.9 million.

The rezoning request is scheduled to go before the Planning Commission at its Feb. 16 meeting. It would then go to the Board of Supervisors, which would likewise hold a public hearing before deciding.

The development would add to a wave of growth that continues to flow along the nearby Hull Street Road corridor. Nearby, across from Harpers Mill’s entrance off the corridor, Midlothian-based Main Street Homes is moving forward with Cosby Village Square, a commercial section of its 68-acre Cosby Village development.

Twenty years ago a developer would not have conceived of burying the apartment element of a residential community so far from a main highway but on-line marketing and leasing has changed that business. Most prospective tenants show up for their first tours with the floor plans and amenities already downloaded on their tablets. Schell offered the fourth story walk up to its first apartments in Magnolia Green and must have found it successful. I’m not aware of any others offering that option without elevators. That hike will get you in shape! Shane Burnette is a busy guy right now and… Read more »

I know a few people in the Board of Supervisors and I will be voting against this because thats my area and I am tired of the building of houses and apartments. Take it to another county other than Chesterfield. Thanks

So where are the plans for new road ways and schools??? Every school in the district is overcrowded. Hull Street is already 8 lines wide at Winterpock and is so overcrowded now you can’t hardly get anywhere. Developers should not be allowed to overbuild and bull doze every single tree in the county. Without a new highway like Powhite extension or 288, there should not be anymore construction allowed. Hull Street can barely support the traffic currently.

Chesterfield County has to rethink how they fund roads in this area. In that this area is the largest consumer of road funding in the county leaving the older parts of Chesterfield with no money for sidewalks and streets cape improvements along with road upgrades. Chesterfield should consider putting a 10% tax on this and have the funds go into a road improvement trust fund to avoid it draining funds from Vdot. Another mess is Chesterfeild should consder building another large 4 to 6 lane road to add act as a alernet east and west route to Route to 360.… Read more »