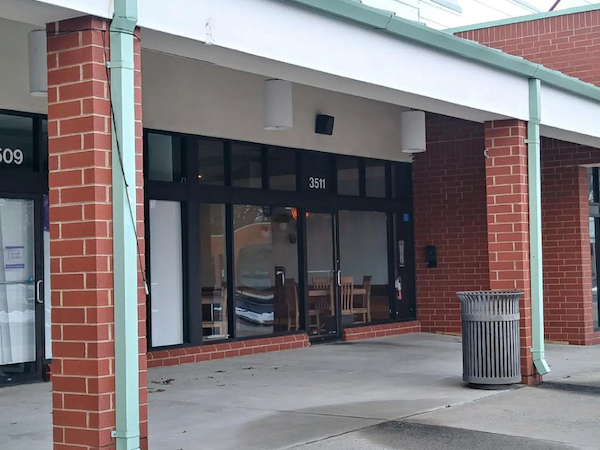 Yummvees is a vegan restaurant that plans to open at 3511 Courthouse Road in Chesterfield County. (Jack Jacobs photo)

After putting her vegan catering company on hiatus for about a year, Tracy Flitcraft is firing up her chickpeas, tofu and seitan into a full-on restaurant.

Yummvees is planning to open this month at 3511 Courthouse Road. The space was previously home to C and D’s Kuntry Kitchen, which closed in April.

The concept is a renewal of Flitcraft’s home-based catering company that went by the same name.

“I told myself I would one day do a brick and mortar, though I didn’t think I would do it during a pandemic,” Flitcraft said.

The 100 percent vegan restaurant will serve up a variety of house-made items for brunch and dinner. Menu items will include animal-free takes on foods like chicken and waffles, burgers, and ribs alongside soups and salads. Appetizers will run about $8 to $12, while entrees will come in at $10 to $22.

“I’m a big believer that vegan food doesn’t have to be just salads. We have a smoker in the back. How many vegan places have a smoker?” Flitcraft said.

The restaurant will swap out meats for chickpeas, tofu and seitan, which is a vegan protein made by rinsing the starch out of wheat dough.

“It’s like taking a pound of ground beef and being able to do anything with it,” she said.

When Yummvees opens, the plan is to cap its indoor seating at half its 48-seat capacity due to the pandemic. An outdoor space will be able to accommodate 24 people.

The restaurant plans to only offer indoor dining by reservation, and will also offer takeout facilitated through its website. Flitcraft said she plans to forgo third-party food delivery apps to avoid the fees associated with them.

Yummvees was a career change for Flitcraft prompted by personal tragedy. In 2015, Flitcraft’s unborn son died eight months into her pregnancy after an emergency C-section. The experience motivated her to leave a career in human resources to focus on her passion for food.

“We all have that lightbulb moment in life. And for me, it just happened that something awful happened.”

Afterward, Flitcraft converted her dining room into a commercial kitchen. She launched Yummvees in 2016, and did vegan catering and prepackaged meals for three years. She wound down Yummvees about a year after she helped co-found Hang Space, a Bon Air vegan restaurant, in 2018. She continues to be a co-owner of Hang Space.

Now reviving the Yummvees brand, Flitcraft said the name is a play on positive reactions to an early menu item, a granola ball made with dates and oats.

“Everyone would say they were so yummy,” she said. “They’re vegan, so we stuck a ‘v’ in there (into yummy). There’s no great story behind that, but those balls are how this started.”

So looking forward to being able to get some great food from here! Most of the plant based (vegetarian and vegan) food establishments are in the city – it’s wonderful that she’s bringing Chesterfield into the fold.
Can’t wait!

Goodluck to your restaurant in a thriving county like Chesterfield which is where I live. I know a lot of my friends and family aren’t big into vegan foods and you have to capture people who come into the parking in order to be seen from Hull Street and Courthouse which I saw where your located. Hope you do well.

Hopefully the somewhat unique type of product will draw a customer base that can overcome the horrible access to this space. Prior tenants (some good, some not so much) have struggled. I’ll certainly try it out, especially for brunch which has very little (read ‘no’) competition in that area. Best of luck to the owners!

Is there anyway I would be able to get in contact with the owner, Tracy Flitcraft? Is there an email that can be provided?