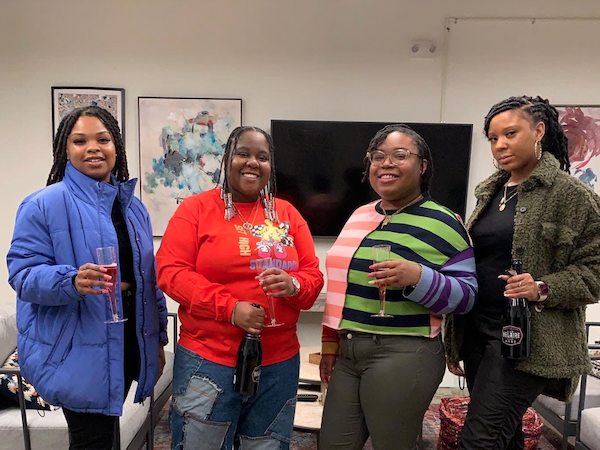 Richmond’s newest record label is looking to tap into talent in Virginia, Maryland and D.C., and help acts make the leap into the big leagues.

Siren Vibes Records, with three artists already on board, was launched in the city in January by the three-woman team of Desiree “Des” Newman, Alexis Hitchman and Kelmisha Davis.

Its goal is to act as a pipeline for regional artists to larger markets like Los Angeles.

“Richmond is a secondary music market, so we want to bridge the gap,” said Newman, the company’s CEO. “All the magic happens out in La La Land.”

Currently on the label’s roster are Jehmilaa of Northern Virginia, Montro Hefner of Richmond and S.AE of Baltimore. Though the initial trio are hip-hop artists, Newman said the label wants to attract musically varied and versatile artists, while capturing a certain sound for its hip hop acts.

“A lot of people out there do bubblegum rap and TikTok rap. We want to recover that greatness and bring it back,” she said.

Siren Vibes for now operates out of a home office in downtown Richmond. It doesn’t have a recording studio on site, but contracts with local recording studios like Defiant Studios and Da Spot Recording Studio to record songs or develop beats for the label’s artists. Those studios take a royalty cut in exchange for their services.

Siren Vibes makes its money through contracts with its artists, which pass on 20 percent of what they make to the label.

Newman runs the label full-time and leverages her connections to the industry through her previous experience as a rapper and her studies at New York University, where she is studying music business.

The rest of the team works part-time for the label, but also brings their own prior experiences in and out of the industry to bear. Hitchman, an investor, serves as marketing executive and Davis, who works as a hairstylist and founded Richmond-based clothing company Twistedd Apparel, is the label’s creative and artist development executive.

Newman was inspired to launch a label to bring a dash of diversity to what she sees as a largely white and male world of music industry leadership, one she became more familiar with through a virtual internship with Warner Music Group last year.

“I saw a lack of diversity across the board in music executives,” she said. “That and my own experience during my internship where no one looked like me sparked the fire in me.”

The music industry can be difficult in the best of times and it’s become more challenging during the coronavirus pandemic and its disruptions to live music.

Newman noted social media like YouTube and Instagram can be monetized, and the label has made a push to help its artists understand and capitalize on that opportunity.

The label is working on virtual live-streamed concerts for its artists, a concept that’s blossomed during the pandemic. Newman said she could see a post-pandemic future where those virtual concerts continue to happen.

“We’re rolling with the pandemic and making sure our artists are put up where the world is and making sure they are able to monetize their social media, their branding,” Newman said.

Though its starting out with a focus on regional artists, the label would like to expand its roster beyond its current territory. Eventually, Newman said, the label could open a studio space in Los Angeles or be acquired by a larger record label.

“They’re not looking to spend the time to develop artists. They allow independent labels to do that for them,” Newman said of bigger labels.

As for the Siren Vibes name, it was inspired by bystanders’ usual reaction to an emergency vehicle as it zips by.

“It’s a loud vibe and good music,” she said. “When you hear a siren, you look around to figure out where it’s coming from.”

Ima local artist from N.N va glad to see things are moving towards the city more meaning a opportunity🎥💵