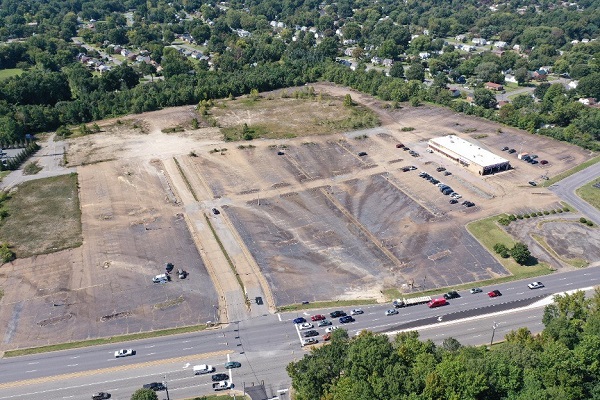 An aerial shot of the Henrico Plaza site, which has remained mostly vacant since its namesake shopping center was demolished in the mid-2000s. (BizSense file)

The U.S. Environmental Protection Agency awarded the City of Richmond, the Henrico County Economic Development Authority and nonprofit Project:Homes a $600,000 grant to assess properties under the EPA’s Brownfields Program. The grant will fund assessments of commercial and industrial properties with environmental contaminants and potential redevelopment or reuse opportunities.

Initial target areas will include sites along the Route 1 and Commerce Road corridors, properties around the former Henrico Plaza site, and properties along Mechanicsville Turnpike and Laburnum Avenue. Grant funds can be used for lead-based paint and asbestos material surveys, mold studies, national historic preservation act applicability, and certain types of planning activities.

At its regular meeting last week, the Richmond City Council adopted a resolution to declare a public necessity to rezone city properties along Broad Street west of Interstate 195 from B-3 General Business District to TOD-1 Transit-Oriented Nodal District. The change would allow for denser development in accordance with the city’s Pulse Corridor Plan.

Also at the meeting, the city administration introduced an ordinance to direct funds from the Virginia Department of Rail and Public Transportation to paint the GRTC Pulse rapid transit bus lanes red.

Plans call for the pavement of the transit-only lanes to be painted red, either solid or hatched, starting with the stretch of Broad Street between Thompson and Foushee streets.

The move is aimed at enhancing route efficiency and pedestrian safety, with the red lanes alerting drivers when to vacate a bus lane and signaling pedestrians to take extra caution.

The grant funds were secured by the city’s Office of Equitable Transit and Mobility. The state will reimburse the city over $1.6 million for the project, and the city is allocating over $413,000 toward the effort. Project completion is planned for spring 2022.

The RVA311 mobile app can be downloaded from the App Store or on Google Play. Presentations on the mobile app and user portal and a demonstration video are available here.

Standard & Poor’s Global Ratings has raised its long-term rating and underlying rating on the City of Petersburg’s outstanding general obligation bonds to BBB+, an increase from BBB-. The upgrade reflects S&P’s view of Petersburg’s financial position, including increased reserves and liquidity.

The rating marks the third consecutive upgrade for Petersburg, up from BB+ in 2018 and BBB- in 2019. The city’s bond had fallen to a BB rating in 2016. The city ended fiscal year 2020 with a surplus due in part to cost-cutting measures and expense savings following the onset of the COVID-19 pandemic.

Hanover County’s proposed budget for fiscal year 2022 includes a general fund totaling $289.9 million, which is an 8.7 percent increase compared to the FY21 budget. The FY22 budget would allocate $87.8 million to public safety (a 7.2 percent increase) and $111.4 million in local funds to the school district (a 5.4 percent increase).

The proposed budget wouldn’t increase taxes. The property tax rate would remain level at 81 cents per $100 of assessed value.

The spending plan would earmark $9.7 million for public safety capital projects and includes $1 million in local funding to support the county’s broadband expansion plan. The budget also proposes about 15 new county positions, about 10 of those in public safety agencies.

Since County Administrator John Budesky presented the initial proposed budget to the Board of Supervisors in February, the plan has been tweaked with the addition of $2.3 million in state funds to the school fund for raises, and $40,000 in state funds for general registrar office raises as part of the general fund. The amended proposed FY22 budget totals $513.2 million.

The public hearing on the proposed budget is scheduled to be held on April 7. Budget adoption is expected to take place April 14. The proposed budget, sans recent additions, can be found here.

Goochland County was awarded $567,000 in grant funding from the Virginia Telecommunication Initiative earlier this month. Goochland and Port 80 Internet Services will use the award to build out 40 miles of broadband fiber in the county.

The county said in its announcement of its grant award on March 21 that it will provide more information about the service area and other project details in the coming weeks. The original grant application materials available on the VATI website do not reflect the awarded service area or finalized maps. That’s because the application was tweaked after grant awards from the FCC’s Rural Digital Opportunity Fund.

Goochland’s grant is part of a recently announced $20.1 million round of VATI grant funding allocated to 11 projects in the state.

The county had also submitted a VATI grant for a project in western Goochland in collaboration with Firefly Fiber Broadband, but that application was rejected. An application the county and Firefly submitted to the Department of Agriculture’s ReConnect program was still under review at the time of the county’s VATI announcement on March 21.