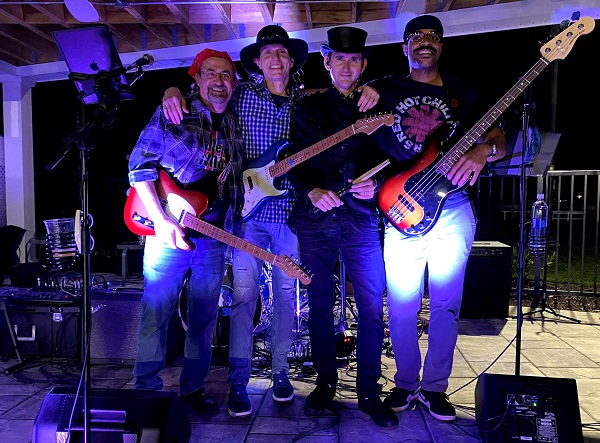 When The Doobie Brothers sing “Music is the doctor,” they may as well be singing about The Vagabond Dandies.

Not only are most of the band’s members MDs, but the local rock group formed at the outset of — and in some ways because of — the coronavirus pandemic that’s given them even more reasons to rock out.

The group was brought together by drummer Gonzalo Bearman who, as chair of VCU Health’s Division of Infectious Diseases, is the health system’s top infectious diseases expert. The foursome includes two more VCU physicians: guitarist Gary Tye, chief of pediatric neurosurgery at Children’s Hospital of Richmond at VCU; and dermatologist Justin Haught, who fronts the group on guitar and vocals. 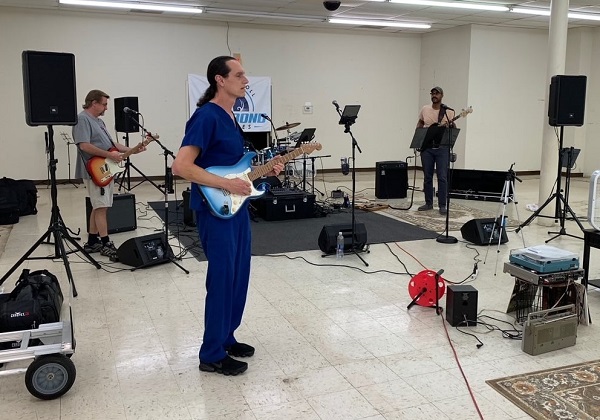 Haught sporting scrubs during a rehearsal.

Rounding out the band is bassist Greg Lawson, the lone non-doc in the group whose day job is manager of Henrico County Public Schools’ Adult Education Center.

Lawson and Bearman had been playing together the past four years when, as the pandemic arrived last year, the third member of their trio parted ways, leaving Bearman to look for recruits among his medical ranks.

“Having my contacts in the hospital, I knew that Gary and Justin were both guitarists and into music, so I recruited them in,” Bearman said in a recent Zoom call. 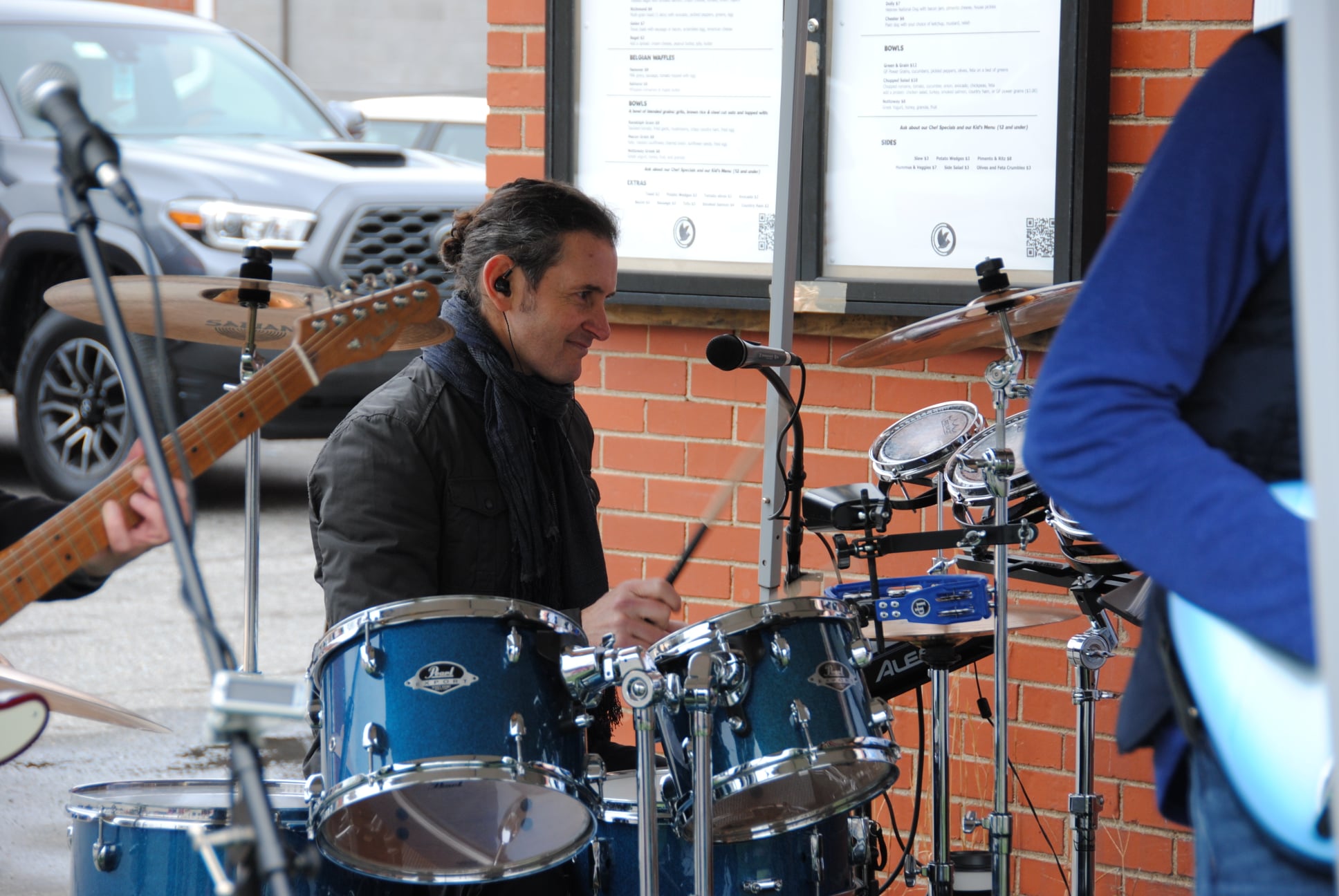 Bearman behind the drums.

“We were very fortunate that we had a huge rehearsal space where we could actually rehearse with no one else around, maintain distance and still rock and roll,” he said. “It was really an interesting year, because a lot of bands probably went on hiatus because of the pandemic.”

Since then, the group has played outdoor or livestreamed gigs at such venues as Kindred Spirit Brewing and at Grayhaven Winery, where they’ve scheduled their next show on May 22.

The group’s also entertaining their professional peers, virtually, via a 10-song performance they recently recorded that VCU Health is showing as part of its lunchtime concert series.

A 10-minute clip of the video is also set to be shown in a virtual happy hour for next week’s spring conference of the Society for Healthcare Epidemiology of America, of which Bearman is a member.

Covering classic rock and modern rock staples, the band’s set lists, which Haught puts together, range from Cream, Jimi Hendrix and ZZ Top to The Killers, The Cars and Franz Ferdinand. They also throw in the occasional ’80s hit from acts such as Duran Duran or Billy Idol.

As for The Doobie Brothers, the Dandies are considering adding “The Doctor” to their repertoire – at a reporter’s suggestion. 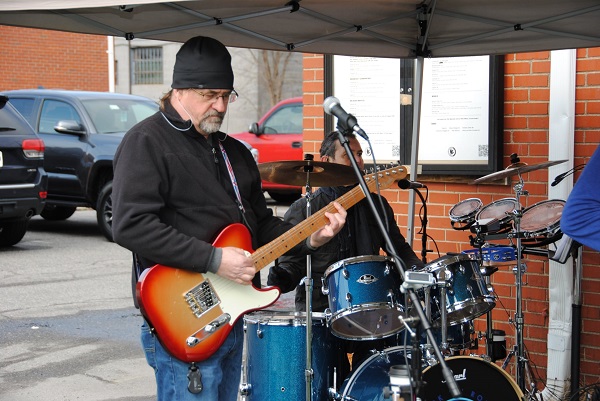 For Bearman, who’s spent the past year leading VCU Health’s COVID-19 response strategy, the gigs and rehearsals have been a helpful reprieve from the stress of his day-to-day work, which includes running the health system’s infection prevention program.

“It’s been a bit taxing,” Bearman acknowledged, “so I think that this project, which I consider a long-term project, came at a very appropriate and opportune time for me.

“Even if I’m only able to practice for 15 to 20 minutes or 30 minutes at home, and then rehearse once a week with the band, it’s had a huge positive impact on my psyche,” he said. “It actually increases my energy level, which is good, and I need all that to be sharp and focused here at the hospital.” 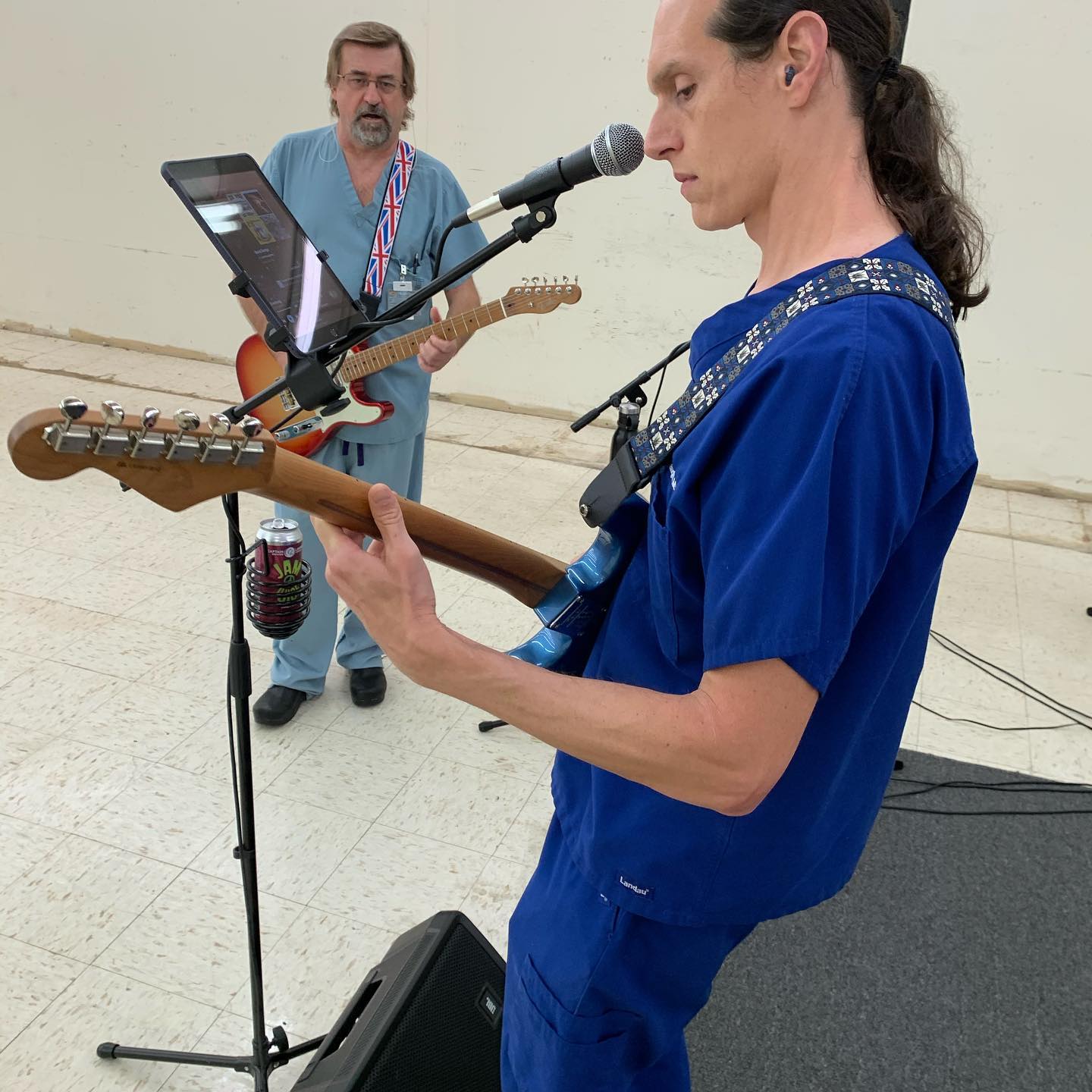 Gary Tye, left, and Justin Haught in their day-job attire.

For Lawson, who oversees the Adult Education Center’s programs, playing in the group has been its own kind of educational experience. 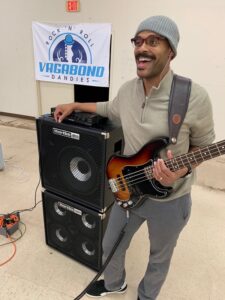 Greg Lawson on bass, between his day job as an administrator with HCPS.

“It’s a creative outlet, that’s definitely a huge part of it. Also, we can easily become absorbed in the day-to-day responsibilities of the office and responsibilities at home, but I feel it’s really important for us to focus on the development of ourselves,” Lawson said.

While the pandemic has kept their live performances outdoors — “We’ve had some gigs in some cold weather,” Bearman noted — livestreaming performances through platforms such as Facebook Live has allowed the band to reach a wider, even international audience.

“In December we did a Facebook Live gig. It got a lot of views,” Bearman said. “Some of Gary’s friends and family from the United Kingdom watched it live — it was like 3 in the morning over there — and some of my friends from Argentina watched.”

“We get a lot of positive feedback, because people have been locked up for the winter,” Tye added. “Just getting to an outdoor gig or a large area where they can see us and enjoy some music that they’re familiar with, it’s huge.”

Bearman said he’s also brought some of his day-to-day to the group, particularly management skills he’s picked up running the infectious diseases division. 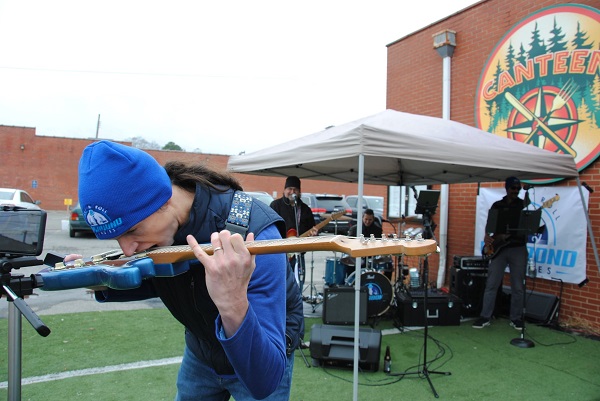 “I’m not the musical director, let me be very clear, but I’ve kind of defaulted as the manager,” Bearman said. “I’m the one getting the gigs, trying to line up transportation for this, work on the studio dates, so I’ve kind of used those skills to organize a smaller project. Maybe not quite as explicitly as I run a division, but I think I leverage those skills to put this together.”

Bearman’s also responsible for the band’s name, which he said stems from a T-shirt he picked up while traveling across Europe that said “Vagabond Dandy” on it.

“I just liked it,” he said, laughing. “It had a picture of this dandyish-looking guy with a bowler hat, so I kind of appropriated that. I did a little bit of research to make sure there wasn’t a Vagabond Dandies rock band out there, and there wasn’t. I was very surprised. We figure that gives us the license to be kind of dandyish sometimes with our attire.”

“We’ve kind of come to the agreement somebody’s got to be wearing a hat,” Bearman said. “One of the four guys has to have a hat on when we play.” 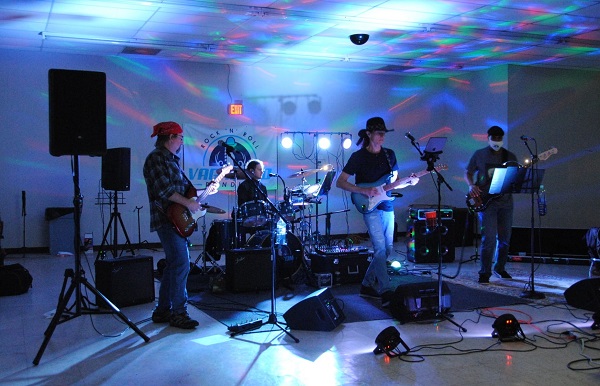 The band gets psychedelic. “Somebody’s got to be wearing a hat,” Bearman said.

For Haught, who’s been playing guitar in bands for 25 years, music and medicine have always been separate endeavors, though he acknowledged his rock-and-roller look occasionally blurs the lines.

“Since I have long hair, when patients find out about the music I play, they always want to talk about it. I feel it makes them more comfortable with me,” he said. “My nurses always roll their eyes when patients start talking about music, because they know I will spend an extra five minutes in the room.”

As for performing with his new band, Haught added, “I will be happy when things open up fully. We will have more gigs for sure.”

This is the latest installment in our Downtime series, which focuses on business people’s pursuits outside of the office. If you, a coworker or someone you know around town has a unique way of passing time off the clock, and getting through the pandemic, submit suggestions to [email protected]. For previous installments of Downtime, click here.