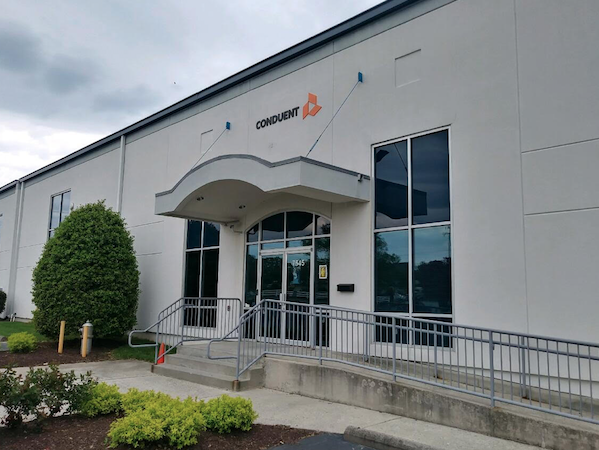 Conduent, a government services company, is moving out of 7545 Midlothian Turnpike, where it operated a support center for the state’s Medicaid program. (Jack Jacobs photo)

With its Medicaid support contract at an end, a New-Jersey based company is winding down operations of its Midlothian office.

Conduent has closed its office at 7545 Midlothian Turnpike, where its workers ran a call center and processed eligibility applications for Virginia’s Medicaid program on behalf of the state’s department of medical assistance services.

As part of the contract, the department of medical assistance services paid Conduent about $42 million in fiscal year 2020 and in FY21 $25 million for services through Feb. 28, according to a department spokeswoman.

Conduent began operating out of the 42,000-square-foot facility in 2015. While it is now closed, the company hasn’t officially fully moved out of the space yet, Conduent spokesman Neil Franz said Friday.

The space was listed for lease or sale Monday. Austin Newman and Nathan Shor of S. L. Nusbaum handle leasing at the property.

Conduent had about 250 employees based at the Midlothian office, which also operated English- and Spanish-language websites related to the program. Franz said about 120 employees were laid off by Conduent as a result, but were offered employment with Maximus. The remaining employees were reshuffled within Conduent, which continues to operate under other contracts with the state government for other services.

A Maximus spokesman said the company operates its Virginia Medicaid support services out of a Chesterfield-based office at 1011 Boulders Spring Drive in the Boulders Center.