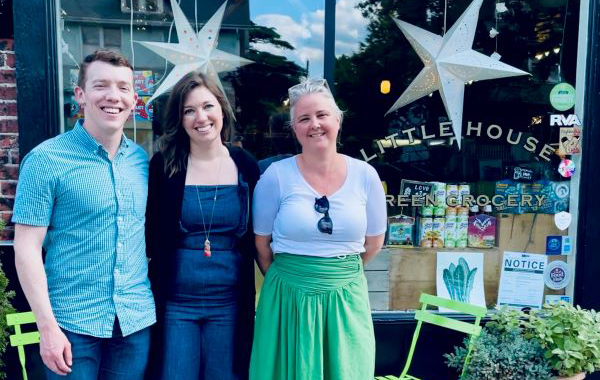 With its founder seeking out a new venture in Staunton, two new owners have taken the keys of a nine-year-old market in the Bellevue neighborhood.

The store has sold a range of groceries with an emphasis on locally-sourced organic offerings out of its 1,600-square-foot spot. The new owners expect the store will largely stick with a similar formula.

“We don’t anticipate changing much. We love what the previous owner built,” Megan said. “It’s so beautiful and beloved by the community.”

The Morrises said whatever changes come to the shelves will be driven by customer interest. They might expand the store’s existing range of prepared foods based on feedback they’ve received thus far.

Megan runs the grocery store full-time, while Patrick helps out on a part-time basis. She previously worked in nonprofit marketing. He is COO at Henrico-based Property Investment Advisors. The store has six employees.

Megan is from Nashville and said she helped launch several small businesses in the Nashville area before she moved to Richmond. The couple lives in Northside and was first introduced to Little House as customers. They had been on the hunt for a small business venture when they saw Little House was for sale.

“Megan and I have always considered the idea of starting a coffee shop or book store. When I saw a grocery store was for sale I sent (the listing) to Megan and said ‘Hey, do you want to buy a grocery store?’” Patrick said.

Wright said she put the grocery store on the market because she felt she had done all she could with the concept. She said fresh faces would be better suited to lead the store into the future.

“I love the store and I love this community and I really wanted to see it grow. I felt like it needed some new energy to make some of those changes toward whatever would help it be sustainable for the long run,” Wright said.

Wright is moving to Staunton. As she closes the book on Little House, she plans to start a new professional chapter as a small business consultant.

Other recent changes in the Bellevue retail scene include the arrival earlier this year of guitar shop Three One Guitar, which moved from Scott’s Addition.

And last year the longtime Bellevue Dry Cleaners left its namesake neighborhood to set up shop in nearby Lakeside.