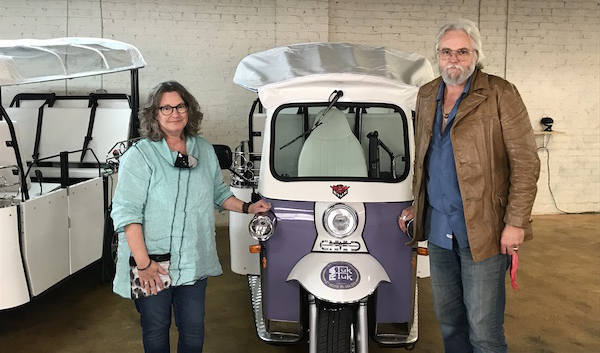 Lyndsi and David Austin opened RVATukTuk in 2019. The business struggled through the pandemic but now it is so busy the couple is looking for more drivers. (BizSense file)

It’s been two years since Lyndsi and David Austin launched RVATukTuk, offering tours and rides on their fleet of electric-powered, three-wheeled open-air vehicles.

Now, as Richmonders venture out again in a vaccinated world, the couple’s tuk-tuks are having a moment.

“To date (in 2021) we have done more tours than we did all of last year. Now it’s month over month; the increase is incredible,” Lyndsi Austin said. “We did like 80 tours in April and 136 or 137 in May. We’ve already booked more in June than we did in April that haven’t even happened yet.”

That’s a welcome change from the startup’s early days, which were tough in the first few months of operation in 2019 and only became more difficult as the COVID-19 pandemic hit and forced their customer base inside.

To keep revenue flowing, they got creative during the winter by running “tacky light tours” around the city.

Since then, Austin said, their business has been busier and busier. It doesn’t hurt that customers are allowed to drink in the back of the tuk-tuks.

“When people ride with us it’s really more about being on the tuk-tuk, and I don’t think you could say that about an Uber, ever,” said Austin. “It’s not so much about transportation. We’re really selling the experience.” 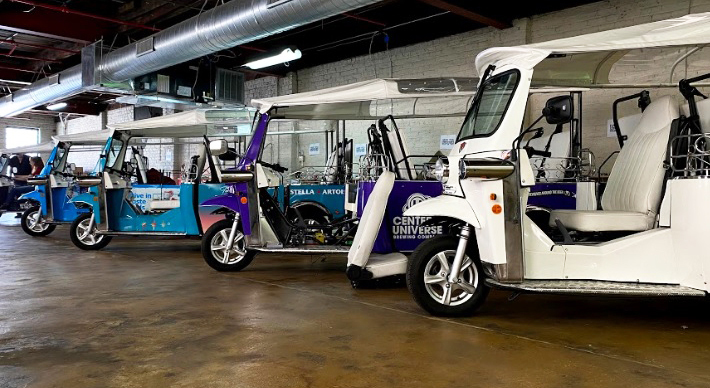 RVATukTuk’s fleet of tuk-tuks has grown as demand has increased. (Noah Daboul photo)

RVATukTuk also gets income from advertising on the sides of their vehicles. Companies like Brown Distributing Co. and ValleyStar Credit Union have reached out to them about their ad space.

The advertising revenue helps cover operating costs, the biggest of which is the insurance on the vehicles.

“Because these are unusual vehicles that insurance companies don’t have a lot of experience with, we pay about $5,000 a year for each one,” Austin said. “I am hoping that will change over time. They’ve been around in the U.S. for just over five years and there has not been one incident with them.”

Because of their ramped up demand, they added two more tuk-tuks to their original fleet of four, which they keep at 1113 W. Clay St. in the Carver neighborhood.

The Austins said they have about 10 drivers on staff and are in desperate need of more. They look for people with a clean driving record, good customer service skills, and knowledge of the city.

The couple said people come from around the state to ride and, for most lately, it’s been their first experience going out since the pandemic began.

Lyndsi added, “And being the center of attention.”

Am I supposed to believe people actually pay for these tours? Monument Ave? Scott’s Addition? Hollywood Cemetery? St. John’s Church? Who are these people? Carytown? The city leaders and popular culture have done so much harm to some of these attractions that you would have to pay me to go there. “Hey, honey.” says me, “let’s go take a ride down Monument Ave. and look at the destruction the rioters produced, then we can go over to Hollywood Cemetery and see the toppled headstones of old Virginia gentlemen. St. John’s Church was once the hangout of a bunch of slaveowners… Read more »

Actually Monument Avenue looks more beautiful now. People enjoy visiting that area because of the green spaces and the stately homes, not because of statues of big men sitting on big horses.

Those stately homes and green spaces have always been there and have been admired for years. Of course, most of the people hating on the statues, likely are hating on those same stately homes belonging to privileged people, being able to live in those homes because of their ill-gotten wealth. It’s not fair that privileged people are able to live like this. Maybe, by damaging their neighborhood with destruction and crime, the property values will decrease, causing residents to move, so that a more diverse and deserving people can replace them. A progressive mindset can take over and erect statues… Read more »

You have got to be kidding! I have driven Monument Ave 5 day a week for 20 years. It’s a s**the hole now.

Who are these people who want tours of Richmond?
Probably people who come here from out of town.
Are you just jealous because no one wants to take a tour of Chesterfield Town Center?

THE OUT OF TOWNERS These people from out of town act like they may be racist. They want to come to Richmond, VA., visit historical places or neighborhoods transformed by gentrification. Carytown was mostly all black in the 1970’s and the liberal middle class came in and changed it. Scott’s Addition had become mostly all black by the 1990’s until its transformation. Many low income families were forced out. These people visit Monument Ave. to see what was once “one of America’s most beautiful Avenues” as described by Oprah Winfrey, after a visit, some number of years ago. (So I… Read more »

OK. My wife is right, again. Not all the politicians running the gov’t are democrats, some, a very few, screwing up, are republicans.

Fantastic Light EV for tours, weddings, and similar events. Silent, except for the sounds around you and speaking with your traveling party. Thank you for bringing the eTuk-Tuks to RVA area!