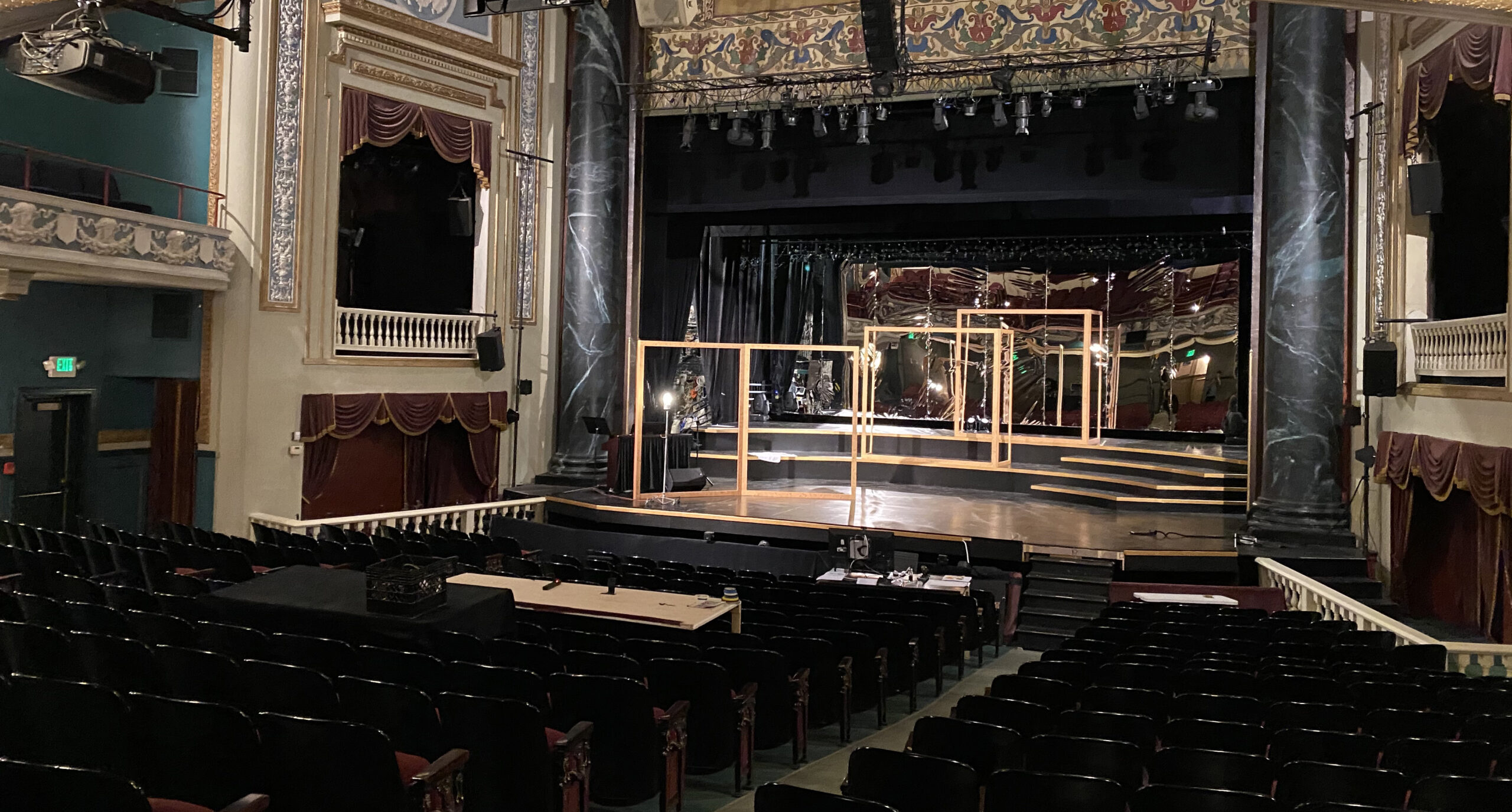 The Virginia Repertory Theatre is reopening with “Ella and Her Fella Frank,” its first show in over a year, at The Sara Belle and Neil November Theatre. (Noah Daboul photos)

After grinding to a halt when the pandemic hit, the Virginia Repertory Theatre is ready to break a leg.

The theater company on Friday will mark its grand-reopening with “Ella and Her Fella Frank,” the first show in over a year at The Sara Belle and Neil November Theatre downtown.

Running through Sept. 12, the show is Randy Strawderman’s two-person musical about an imaginary concert of Ella Fitzgerald and Frank Sinatra in heaven starring Richmond actors Desirée Roots and Scott Wichmann.

Re-raising the curtain means restarting an operation that spans dozens of employees — many of whom had been furloughed — across the nonprofit’s three venues. 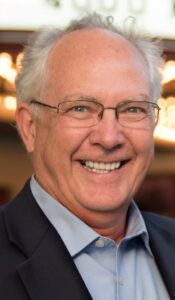 “People are just chomping at the bit to get back and enjoy live theater,” said Phil Whiteway, Virginia Rep’s managing director.

“Come last March, everything stopped. All of the school people; some 20 touring employees, our 42 member full-time staff, 30-some others. Eighty percent of those people were furloughed,” he said. “We weren’t touring, we weren’t presenting in a group. We couldn’t even (hold an interview) … so we just shut down low enough to put a halt to the spending on people, which is really hard.”

The company has welcomed back three quarters of its former staff and is hiring new workers to fill in the rest.

Virginia Rep operates three venues. The November Theatre at 114 W. Broad St. is the site of most of it productions. The building was built in 1911, making it the oldest theater in Virginia, according to Whiteway. The company also operates The Children’s Theater at 1601 Willow Lawn Drive and the Hanover Tavern at 13181 Hanover Courthouse Road in Hanover.

The November Theatre has a capacity of 550 but Whiteway said that for the first few performances of the season, they will be spacing out guests in the auditorium. As of right now, patrons can only buy tickets in groups of two or four.

Another problem Virginia Rep navigated during the pandemic shutdown was how to stay relevant enough to keep its supporters, donors and fans aware that it was still there, Whiteway said.

One answer to that was to create virtual versions of one of its longest-running programs, which addresses social issues to young kids in public and private schools through performance. The biggest of these performances is “Hugs and Kisses,” which addresses child sexual abuse. The typically national tours stopped in 2020 when the pandemic began.

So, the company filmed digital performances of their school tour productions that were rented out to schools.

“It was helpful. It generated a little bit of income and awareness that we’re not disappearing as an entity,” Whiteway said. 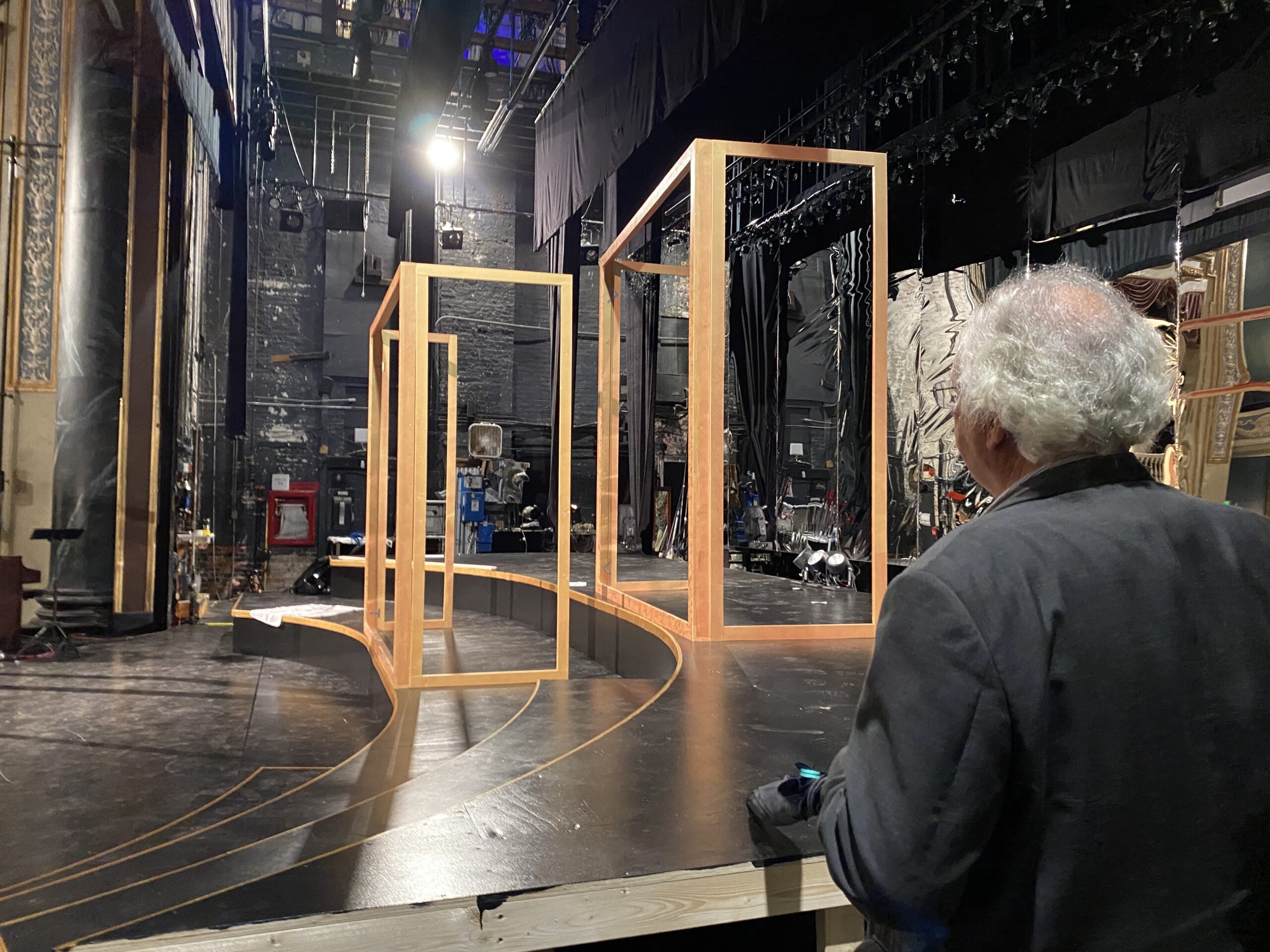 In addition to federal and state financial support, Virginia Rep was able to gain money to start back up from private donations. The company normally operates on about a $5.8 million budget, but this season is operating on only $5.2 million.

“It feels like we’re going fast but we’re about 80 percent of where we were. Hopefully, by fall of next year, we will be back up toward $6 million,” Whiteway said.

He added that staffing has not been as hard as he thought it would be, given the hiring issues seen in other industries of late. Virginia Rep is still looking to fill roles from marketing to construction.

The company also has union labor rules to consider as it reopens, with COVID safety an ongoing priority. In particular, Virginia Rep has a commitment to work with the Actors’ and Stage Managers’ Union through the Actors’ Equity Association.

“Now that we are working in COVID, safety and health is a big deal,” Whiteway said. “We have a commitment to using those members, some of whom live in Richmond. If you want to use union talent, the union’s got to make sure that your venue complies with the need to circulate air so many times in a scientific way. We’ve all been worrying about ‘Is it cool? Is it cool enough for a full house?’ Well, now we are evaluating the quality of the air from a scientific standpoint,” said Whiteway.

Virginia Rep brought in Richmond-based Dominion Service Co. to send reports to union representatives about the air quality of the theater to ensure the safety of its actors, employees and patrons.

“Now we know that this virus isn’t as much about what’s on the surfaces, it’s more about what’s going on here and hanging out in the air. And if you’re yelling and singing, it’s going to hang there,” said Whiteway. “We are safe. We’ve gotten the green light from the union and our local engineers.” 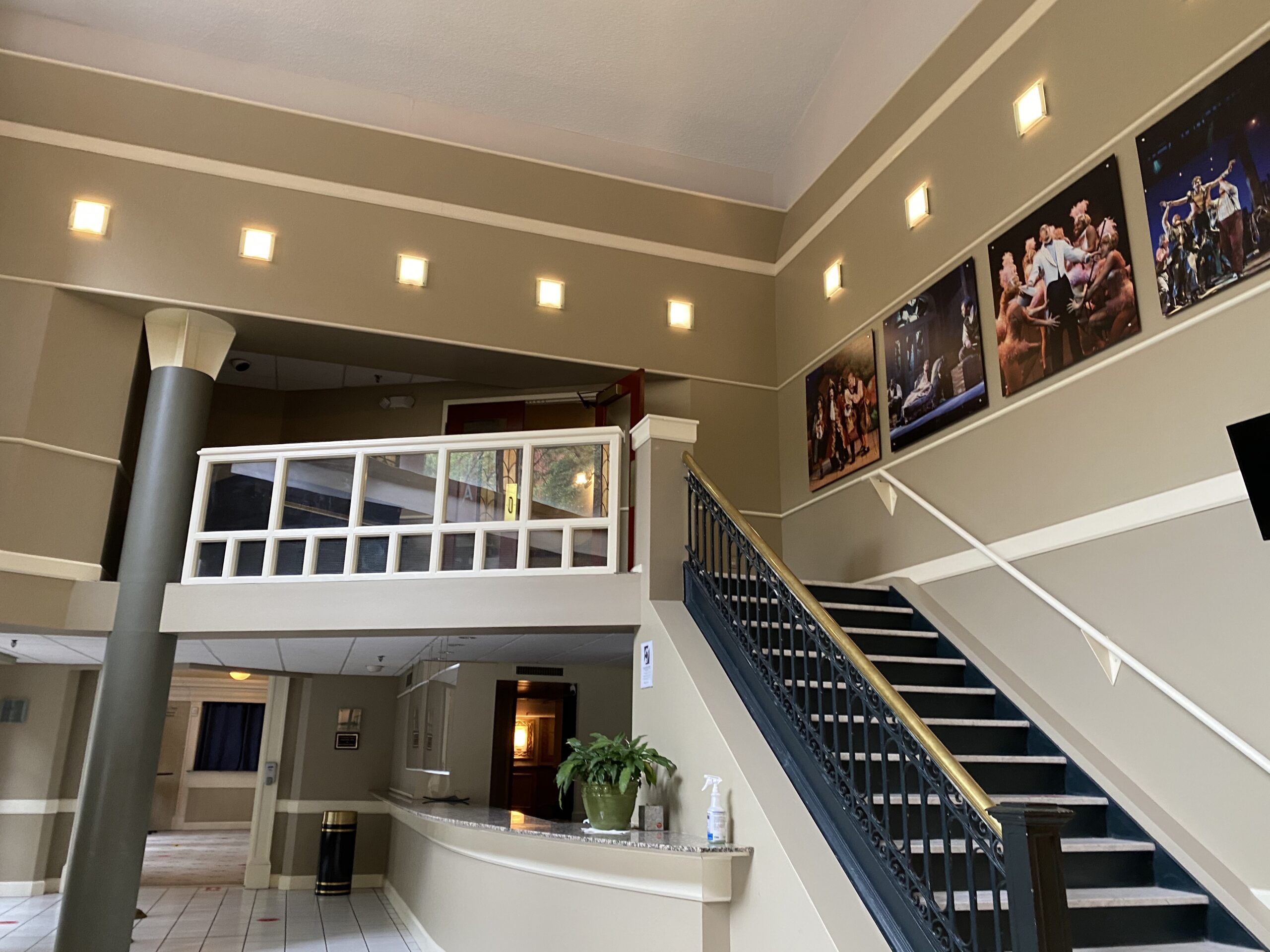 The main stairwell of The Sara Belle and Neil November Theatre displays past productions.

The company is also only hiring people who can prove that they are fully vaccinated, which they say eliminates a lot of potential employees. The alternative is backing away from the union relationship. While there is not a requirement to only work with union talent, Whiteway said the company values the safety of its patrons and actors and the unions share this mindset.

COVID also played a role in how Virginia Rep chose and scheduled the lineup of shows for its reopening.

“None of us were really sure about how re-entry would go, when you’re in the planning phase we wanted to do it slowly and carefully. That means looking at small-cast projects,” Whiteway said. “Ella is a two-person musical review with a seven member band.”

It chose to open with “Ella and Her Fella” to honor Strawderman.

“Strawderman passed away this past August, and because of the pandemic there was no real way to offer public tribute,” Whiteway said. “This production serves as a tribute to Strawderman, who not only conceived of this piece, but was also an artistic director of the Barksdale Theater, which was a predecessor to Virginia Rep.”

Virginia Rep is planning on doing six shows at the November Theatre, including “Ella and Her Fella Frank.” Whiteway said the children’s programs and performances at the Hanover Tavern will be reduced.

“The idea is to slowly get back into it. The ticket sales have been going extremely well for ‘Ella.’ Phones have been ringing off the hook. We are totally blessed to have a strong professional staff that is enabling us to make all of this happen,” said Whiteway.