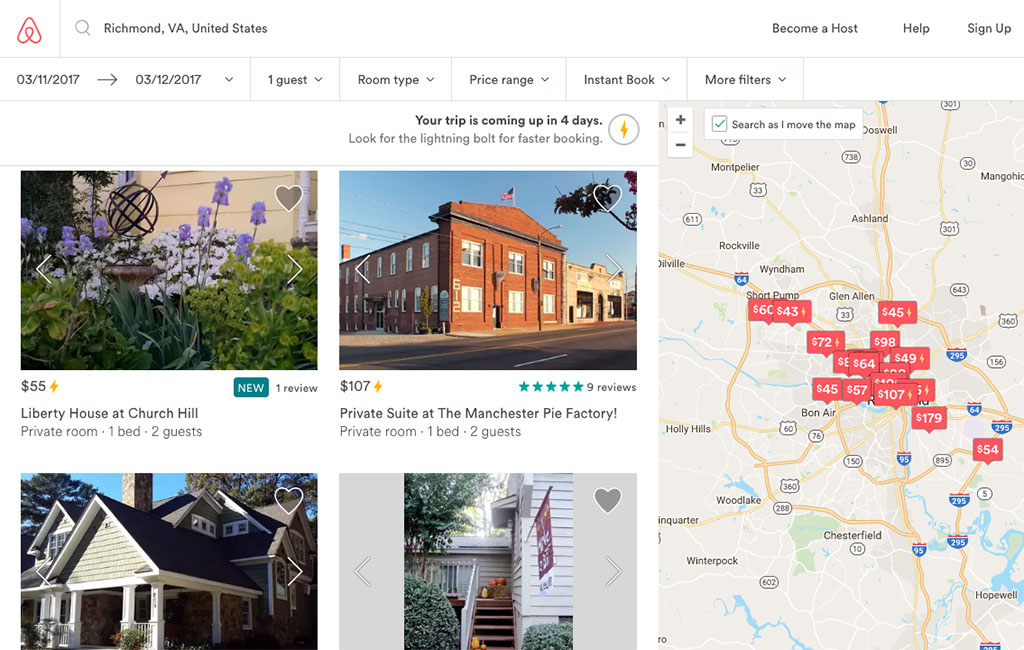 It’s been a full year since Richmond adopted rules for regulating short-term home rentals in the city. But city leaders say they need another six months to get a clearer picture of how the policy is performing, and if any changes need to be made.

In a scheduled review of the city’s STR policy this week, the Richmond Planning Commission said it would wait until January to consider any adjustments to the much-debated policy, which took effect last July with a caveat that its implementation would be reviewed a year later.

Commissioners agreed with city planning staff that more time is needed to fully gauge the rules’ effectiveness, in light of events of the past 12 months that included the pandemic’s impacts on travel and tourism, and a delayed rollout of a third-party program that the city used to identify rental units and monitor compliance.

Add to that a change in leadership and other staff changes in the city’s Department of Planning and Development Review, and commissioners and staff deemed the data insufficient for recommending adjustments. That prompted Chairman Rodney Poole to suggest revisiting the policy in January.

Acting PDR Director Kevin Vonck, who has been leading the department since the abrupt departure of former director Mark Olinger in January, said the time would allow staff to propose recommendations for tweaks to provisions that he said warrant further study.

Those include requirements that STR operators own the property they’re renting out, and that they reside there the majority of the year — a requirement that Vonck said would be hard to enforce. Other reconsiderations could include the $300 cost for a biennial operator’s permit, and whether STRs should be subject to the city’s transient occupancy tax.

More than 500 STR units are currently operating in the city but less than 50 applications for operator permits have been received since the rules took effect last summer, according to Vonck’s report to the commission this week.

Of those applications, only 12 permits had been issued, while five were listed as pending and two were labeled as “ready.” Eleven remained under review, and 14 had been denied due to issues such as incomplete applications, fees not being paid or inadequate dwellings.

The numbers are based on findings from “Host Compliance” software by Granicus, a Denver-based company that also manages Richmond’s Legistar meetings calendar platform. The city paid just over $33,000 for the service through the National Cooperative Purchasing Alliance.

The software found a total of 771 STR listings in Richmond on platforms such as Airbnb and Vrbo. But city planning staff said only 510 of those were actual homes or rooms that were actively being used as STRs. 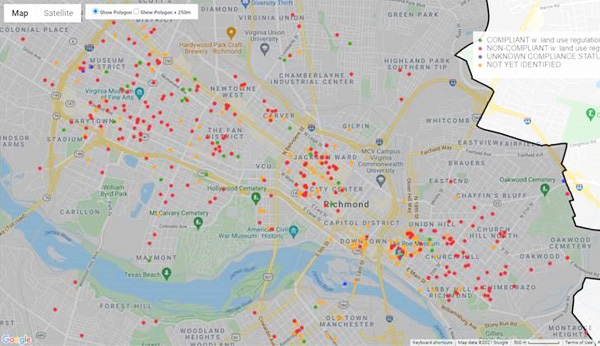 A map of identified short-term home rentals in the city show the greatest concentrations in the Fan and Museum districts, Jackson and Monroe wards, Church Hill and Shockoe. (Courtesy of the City of Richmond)

The larger number is more consistent with data from AirDNA, a short-term rental analytics site, which listed 830 active rentals in Richmond as of Wednesday, based solely on listings on Airbnb and Vrbo. The site listed an average daily rate of $143 and a 70 percent occupancy rate.

Those numbers are up from what was reported pre-COVID. In February 2020, just before the pandemic, AirDNA one day listed 763 active rentals in Richmond, with an average daily rate of $129 and a 67 percent occupancy rate.

Of 46 permit applications the city received since last July, half were submitted since April of this year — a scenario Vonck attributed to the delay in the Granicus software implementation, which resulted in compliance notices going out to identified operators starting in April and May.

The city’s purchase order wasn’t approved until January, three months after the company’s proposal was submitted to the city. Time required for staff training and software took another two months.

The software found that neighborhoods with the most STRs include the Museum District, the Fan, Monroe Ward, Jackson Ward, the Shockoe area and Church Hill. Of the 510 units, 95 percent of them have been active in the last 12 months, while 6 percent — 30 units — came online in the last 30 days.

Most of the units — 87 percent — consisted of an entire dwelling, as opposed to just a room, while 42 percent were single-family residences. Seventy-one percent of unit addresses had been identified, whereas addresses are often omitted from listings for privacy and security concerns. That’s something Vonck said makes compliance and enforcement more challenging.

The city’s policy came five years after the City Council requested rules to allow STRs in Richmond. The process was delayed when the Virginia General Assembly considered limiting local rules, then allowed them via a locally managed registry.

Draft rules were presented in subsequent years, and a series of public meetings and surveys were held before the policy was amended and ultimately adopted.

Many operators were unhappy with the results. Several of them said they couldn’t rent out their homes or rooms under the regulations, particularly the residency requirement. During the report to the commission this week, several former operators expressed dismay over the policy as written as well as the process overall.

“It doesn’t seem like this ordinance has been working,” said Stacy Vanchieri, who said she stopped renting her STR due to the residency requirement. “People are still running their Airbnbs under the radar.”

Vonck said the time between now and January would provide an opportunity for further discussion and public engagement. He said the next report would include recommendations on adjustments to the policy.

A classic government overreach now resulting in an expensive bureaucratic failure. And the taxpayers get to pay for it!

Unless it’s being used as a brothel or a meth lab, you should be able to rent a room in your home, or rent your whole home, without having to get the city’s permission.

Who ever thought that a city that struggles to manage something as basic as building permits could effectively manage short term rentals?

There are plenty of limitations already on what property owners can do. This policy is meant to limit a huge problem that has come with Airbnb and the like: people/companies buying homes just to rent them out short-term. In some cities this has severely limited the supply of homes for long-term rental or sale, and created neighborhoods where few people actually live there.

it’s a made up problem. Not a real problem

How is it overreach when a dwelling is zoned as a dwelling but then operating as a business? If this is government overreach, then all zoning laws are overreach.

It is perfectly rational and reasonable to have some guidelines in place for those wanting to operate a STR business with a dwelling versus it being a home as intended by zoning and coding laws.

Hotels must follow guidelines. Why is it unreasonable to ask that those operating a revolving doors in neighborhoods do the same?

Ashley, Nearly all residential neighborhoods contain dwellings that are businesses. They are called apartments. My experience is that a landlord is either responsible or not, it doesn’t really make a difference whether it’s long- or short-term rental. There are plenty of great and terrible examples of both. I’m not opposed to zoning laws, but in my opinion, these regulations are arbitrary and abusive. You can only be a responsible landlord if you live in the property? Puh-leeze. I have lived next to poorly managed apartments and in the same block as a poorly managed STO, so I am familiar with… Read more »

Would you want to live next door to a short term rental where the owner lets anyone in and they don’t respect neighbor’s space? I didn’t think so.

Maybe instead of revisiting the guidelines in place, we work on enforcement. Doesn’t the City need money anyways. Here’s an easy way to collect.

I also think they should tax income generating homes differently (higher) than those of us living in our homes.

Interesting idea??? You mean as in real estate tax???

Makes sense to me, we should encourage people to get homes as primary residences, but vacation homes and Air BnB homes don’t offer the same benefits to the community and dont deserve protections actual HOMES do.

Rental properties, at least now, seem to also be in short supply so we should encourage them over AirBnB homes

Air BnB does offer benefits. They also can be a source of problems. The ideal is to permit them fully while managing the problems

12 out of 510 indicates current policy is a total and abject failure. Which everyone knew would happen – it effectively banned most of the the STRs… so people were going to ignore it.