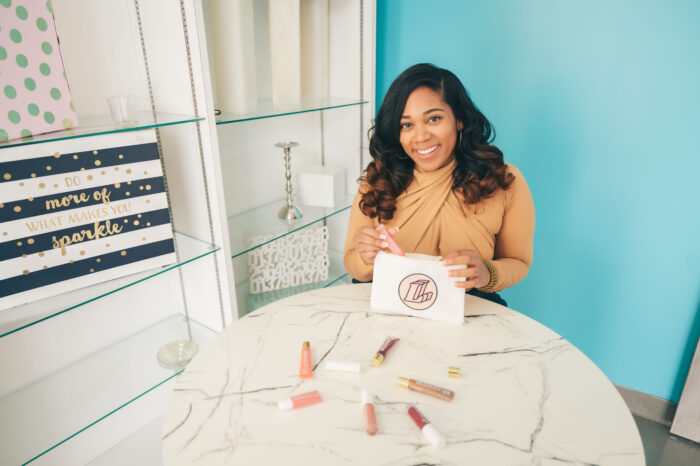 With its initial inventory in hand after some pandemic-related delays, a local startup plans to carve out a niche in the beauty products industry with a lip-centric product line.

LipLoveLine, founded as a side gig by VCU employee Briana Williams, began to roll out its product line last month. The company currently sells lip balm and lip gloss online, and expects to introduce lipstick to its website by early September.

LipLoveLine was inspired by Williams’ struggles with body image and self-esteem while growing up.

“When I was younger, I suffered from health issues like obesity and low self-esteem. One of the things that made me feel beautiful was my lip gloss,” said Williams, 31. “You can feel good without sitting down and watching a YouTube tutorial.”

The company has been more than a year in the making, partly due to development and production being disrupted by pandemic-related delays and ingredient shortages.

Williams, who’s also a VCU alum, used VCU Ventures, a program that supports VCU faculty and staff entrepreneurs, to take care of initial business-creation steps like finding an attorney to file for its trademark and developing a business outline. She also got marketing help from the VCU Brandcenter.

The company officially formed in April 2020.

She worked with a contracted chemist to develop her products, which are made without animal byproducts or animal testing, and a contract manufacturer handles production. The company carries out its own fulfillment and shipping.

The company raised more than $15,000 in a Kickstarter campaign in November to fund its product launch, which was further delayed when the manufacturer suggested some formula changes.

“I was encouraged for many reasons to make some changes to my formulas that ultimately would make it better for me to scale up in the future. If I didn’t do it now, it would be very difficult and costly for my manufacturing in the future,” she said.

Working with her contractors, Williams hashed out product characteristics like scent, texture and viscosity to finalize the line. After that came months of testing for quality and shelf life, a process that wrapped up earlier this summer.

The company is launching with an initial inventory of about 8,000 units. Williams said she’ll sell online-only for now, though she hopes to get on the shelves of beauty retailers in the future. Online sales, as opposed to a brick-and-mortar store, gives the brand a lower-risk way to build a case as to why the big beauty retailers should carry LipLoveLine’s products.

“It builds that credibility,” she said.

LipLoveLine is a one-woman show for now, with Williams running it out of her home while also maintaining her full-time job in VCU public relations. She did have a VCU intern this summer and expects to have another VCU intern in the fall.

She said her time in PR has served her well as she’s launched her startup.

“Although I have no past experience in the beauty industry, I think my love for lip products and background in marketing, PR and social media has been very useful to help build my brand visually,” she said.