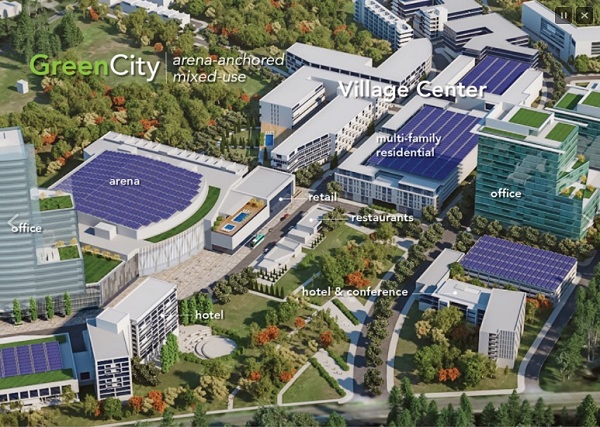 A conceptual rendering shows the arena in relation to other buildings in the proposed GreenCity mixed-use development. (Courtesy of Henrico County)

The Henrico County Planning Commission gave an initial thumbs up to the $2.3 billion GreenCity project this week, while votes on two other high-profile projects proposed in the county will have to wait.

At their meeting Thursday night, commissioners supported rezoning and permit requests for GreenCity, the arena-anchored, multi-use development planned for 200 acres generally northeast of Parham Road and Interstate 95, including the county-owned Best Products site.

The requests now go to the Board of Supervisors, which would decide on the rezoning and provisional-use permit with an additional public hearing and final vote. The board is scheduled to take up the case at its Oct. 12 meeting.

Filed in mid-June, the requests seek to designate the entire project site under Henrico’s Urban Mixed-Use district, which would accommodate the mix of commercial, residential and office uses that would make up GreenCity. The development would be anchored by a $250 million, 17,000-seat arena that would effectively replace the shuttered Richmond Coliseum. 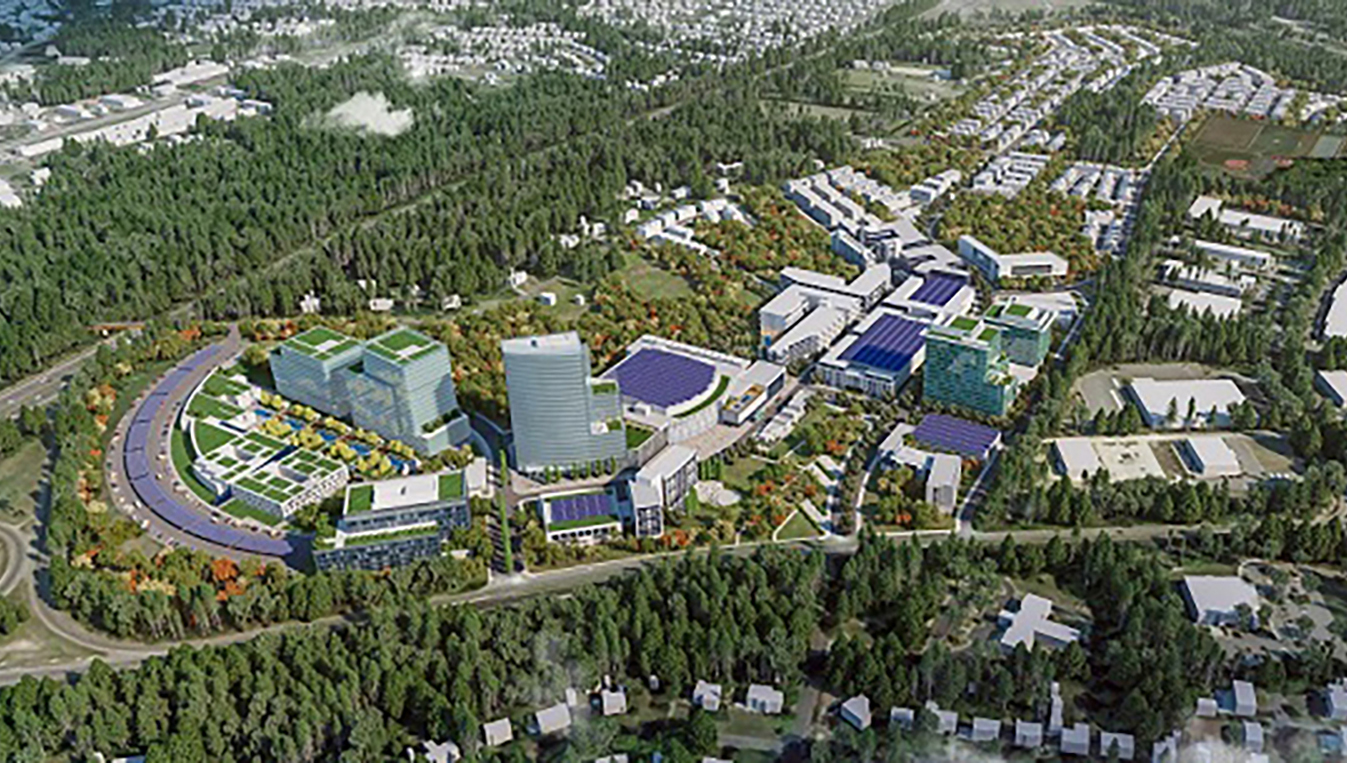 In recent weeks, the developers behind the project submitted a required traffic impact analysis (TIA), which remains under review by county and state transportation officials. A county staff report said preliminary analysis of the TIA “indicates a number of improvements would be necessary” along East Parham Road, including additional traffic signals and turn lanes.

Access to the site also would be provided via five entrances off a planned extension of Magellan Parkway, which would bisect the site and run across I-95 via a new bridge.

A final assessment of staff’s findings from the TIA are to be incorporated into the developer’s proffered commitments for the project, the report states.

Announced in December, GreenCity is planned to consist of 2.2 million square feet of office space, 280,000 square feet of retail, two 300-room hotels, green space, and more than 2,000 residential units, in addition to the arena. The arena, the first hotel and other initial pieces are targeted for completion in 2025, with full buildout anticipated in 2033. 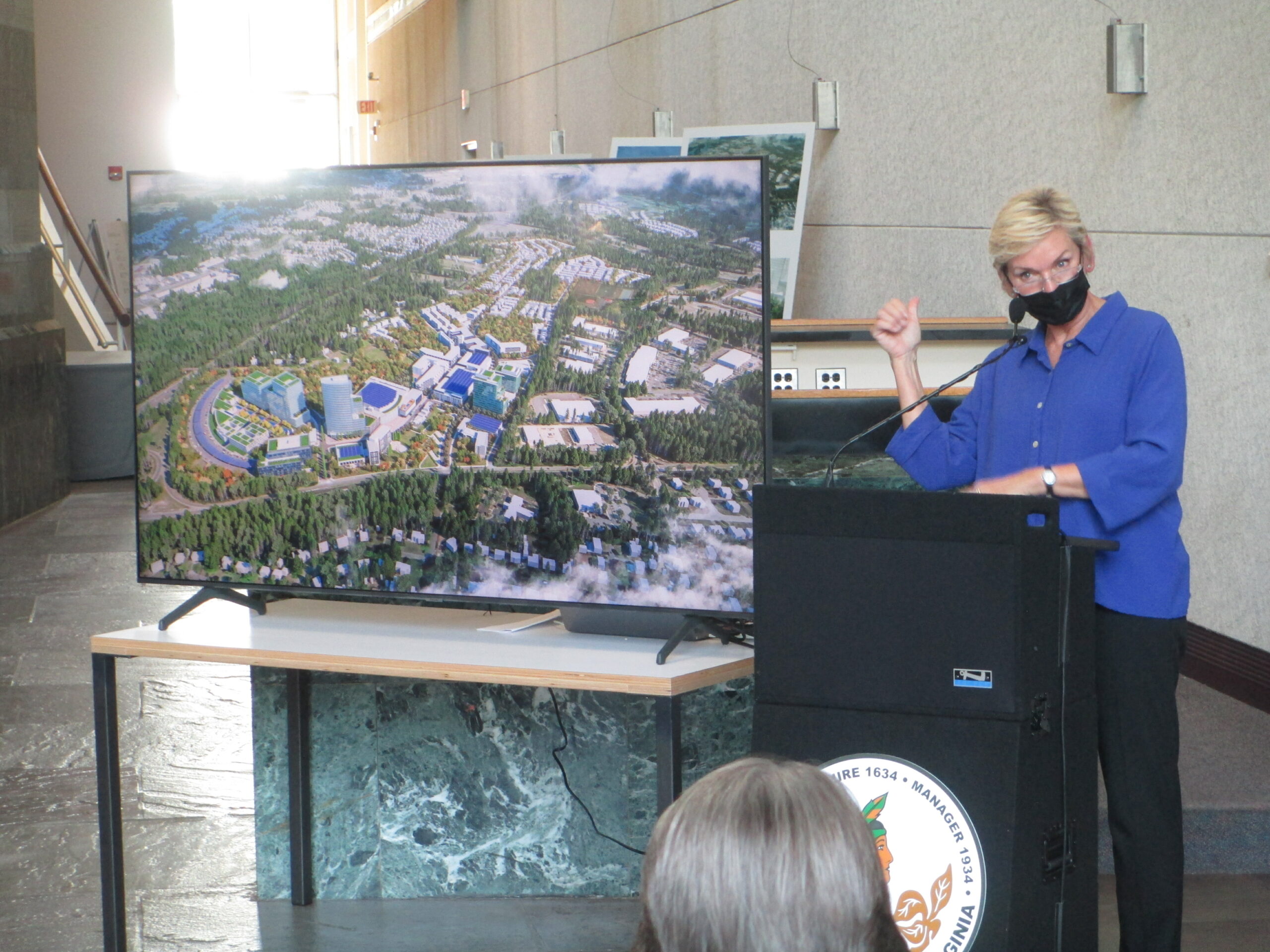 GreenCity developers and Henrico officials recently touted the project with a site tour given to U.S. Secretary of Energy Jennifer Granholm and Congresswoman Abigail Spanberger.

If approved by county supervisors, the rezoning would allow the county to go forward with selling the 93-acre Best Products site to GreenCity Partners LLC, the development entity behind the project. A purchase agreement to that effect has been signed by both parties, with a sale price of $6.2 million — the amount the county paid for the property in 2011.

The rest of the site, known as Scott Farm, would be purchased from Bill Goodwin’s Riverstone Properties, which bought its 110 acres in 2015 for more than $6.4 million.

Roth Jackson attorney Andy Condlin is representing the developers in their requests.

The Planning Commission on Thursday deferred a request from homebuilder D.R. Horton to rezone 420 acres in Varina for a subdivision totaling 770 homes, including townhomes and detached homes. The site, northwest of Yahley Mill and Long Bridge Roads, is about two miles east of the Route 5/I-295 interchange.

Previously proposed by Atack Properties as The Ridings at Warner Farm subdivision, the project — now simply called The Ridings — would add 120 residential units and eliminate a commercial section that was included in the earlier plan. 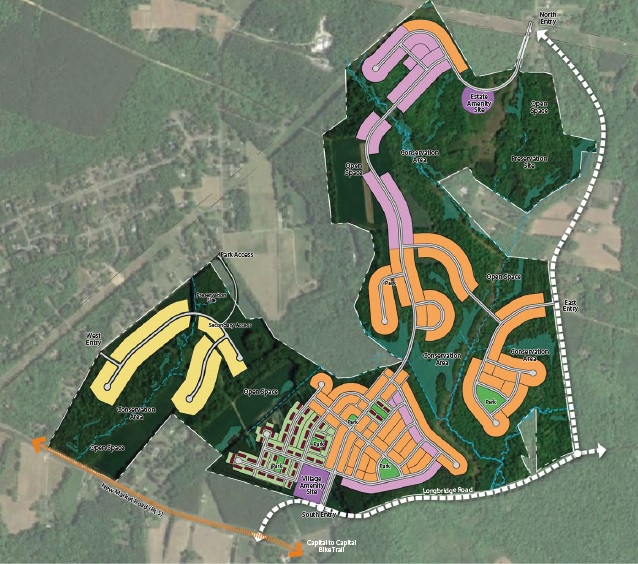 The 420-acre Ridings site, planned for 770 homes, is about two miles east of the Route 5/I-295 interchange. (Image courtesy Henrico County)

D.R. Horton, a publicly traded company that entered the Richmond market in 2018, picked up the project after the passing of Atack principal Bob Atack, who had the property zoned for development in 2012. A website for the new project states Horton plans to begin construction next spring, with buildout projected in eight years. Hirschler attorney Jeff Geiger is representing Horton in its request.

A staff report states that a community meeting held Aug. 23 drew about 100 residents who voiced concerns about traffic and environmental impacts. The case is scheduled to go back before the commission at its Nov. 10 meeting.

Also on Thursday, the commission again deferred a vote on Lingerfelt Development’s plan to add nearly 1,400 apartments and structured parking across five office building properties it owns in Innsbrook. This latest deferral was requested to allow staff to complete its evaluation of the project’s TIA.

The cases were previously deferred in August to allow Lingerfelt to address issues related to mixture of uses, appearance and impacts on public infrastructure and services. They’re now scheduled for the commission’s Oct. 14 meeting.

I’m most intrigued by the planned Magellan Parkway flyover of I-95. Will it include access ramps north and south or will the traffic dump directly onto US Route 1? I don’t see it on the plan shown in the picture.

What types of housing units, if any, will be built in 2025? Is there sign up list to get additional updates as it becomes available?

2.2 million square feet of office space appears to be overly optimistic in light of various office users downsizing as a result of the pandemic.

Hopefully there’s some flexibility with regard to this number.