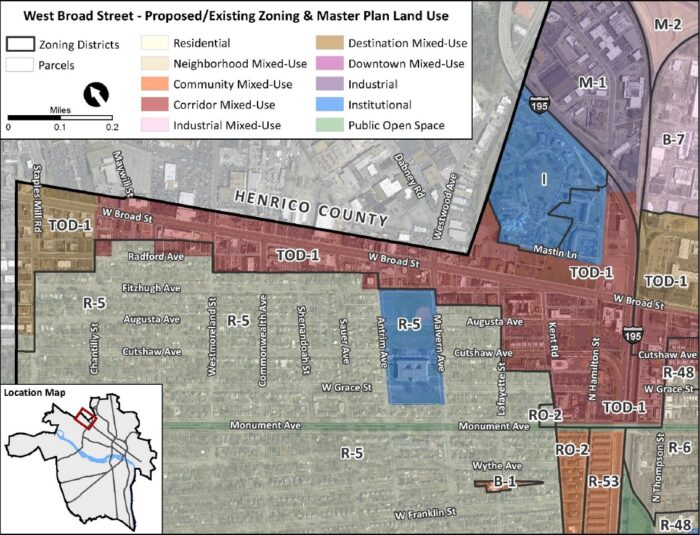 A map shows where TOD-1 zoning would be applied along Broad Street west of Interstate 195. The different colored areas reflect future land use recommendations from the Richmond 300 plan. (Images courtesy of the City of Richmond)

Business on the consent agenda includes a resolution of intent to rezone parcels along Broad Street west of Interstate 195. The rezoning would change the corridor’s mishmash of business and residential-office designations to TOD-1, or Transit-Oriented Nodal District.

A surplus designation and TOD-1 zoning is proposed for a 0.17-acre portion of the Richmond Ambulance Authority property at 2400 Hermitage Road. The rezoned property would be sold for $110,250 to Breeden Investment Properties, an affiliate of Virginia Beach-based The Breeden Co., which would incorporate it into a mixed-use development it’s planning at the adjacent Cobb Lumber site. 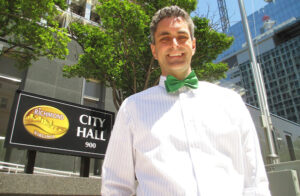 Kevin Vonck was appointed director of the city’s Department of Planning and Development Review. He had been serving as acting director since January following the sudden departure of previous director Mark Olinger.

Vonck was hired in August 2020 as the department’s deputy director. He previously worked as economic development director for the City of Green Bay, Wisconsin, where he also served as executive director of the redevelopment authority and secretary of the plan commission.

Hanover County has new leadership in its community resources and emergency communications departments. 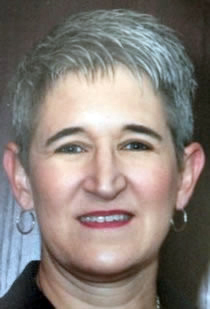 Cheryl Buchanan takes the reins at the emergency communications department. Buchanan comes to the director position after working for the department for nearly 30 years. Buchanan replaces Curt Shaffer, who retired in August.

The department handles 911 calls for both Hanover and Ashland as well as dispatch for first responders.

The county’s new community resources director is Debbie Preston, who previously was the aging and disability services manager at Chesterfield County. Preston takes over the post from Lisa Adkins, who recently retired.