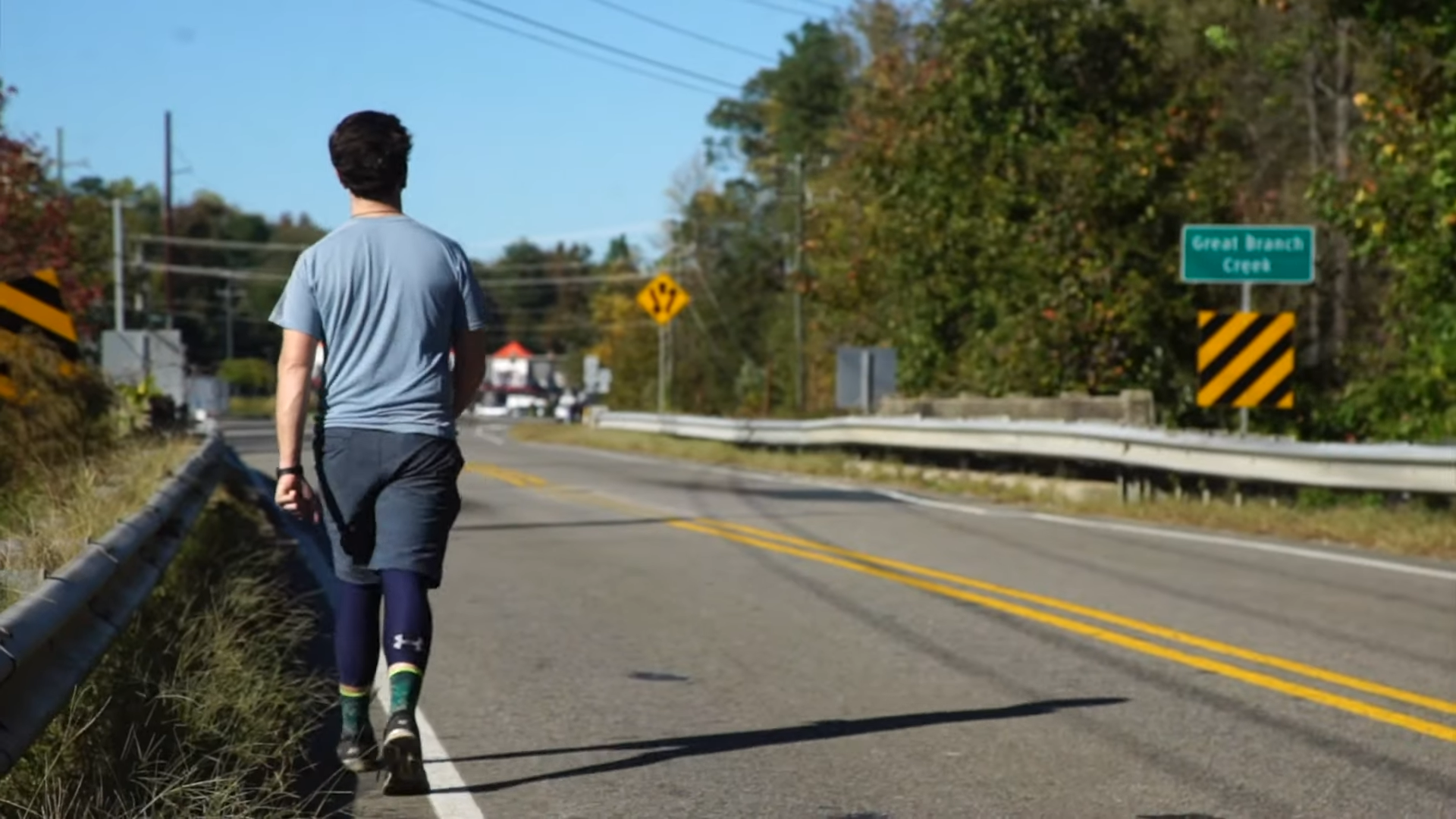 The effort to build a north-south trail from Petersburg to Ashland is gearing up for a financial boost next month.

The Central Virginia Transportation Authority is expected to vote to earmark around $108 million toward the Fall Line trail, a proposed 43-mile walking and biking trail that would connect Petersburg to Ashland, at its upcoming Dec. 3 meeting.

The trail was most recently projected to cost $234 million, and about $73 million in state and local funding was considered in hand for the project, as of late September. Final costs, funding methods and the exact trail path are still being worked out.

The CVTA is a regional authority established last year to administer earmarked tax revenues to transportation projects in the Richmond region. PlanRVA, a regional planning district, provides staff support to the authority.

CVTA Interim Executive Director Chet Parsons, who is also transportation director at PlanRVA, confirmed the expected earmark and on Monday said the authority expected to ask the General Assembly and governor’s office to close the remaining funding gap in the state’s budget.

About $53 million of currently earmarked funds comes by way of the state, while the remaining $20 million is expected to be covered by local funds put up by the localities along the route. Another $14 million in local funds is considered a potential commitment, according to a VDOT presentation at a late September meeting of the CVTA.

Most of the trail would have to be built from scratch, though it would also connect existing trails at Chester Linear Park and Ashland Trolley Line Trail and planned local projects, according to the Fall Line website.

The Fall Line trail effort is led by Sports Backers, a Richmond nonprofit that promotes and organizes regional running races. The Capital Trail Foundation and localities also are involved. 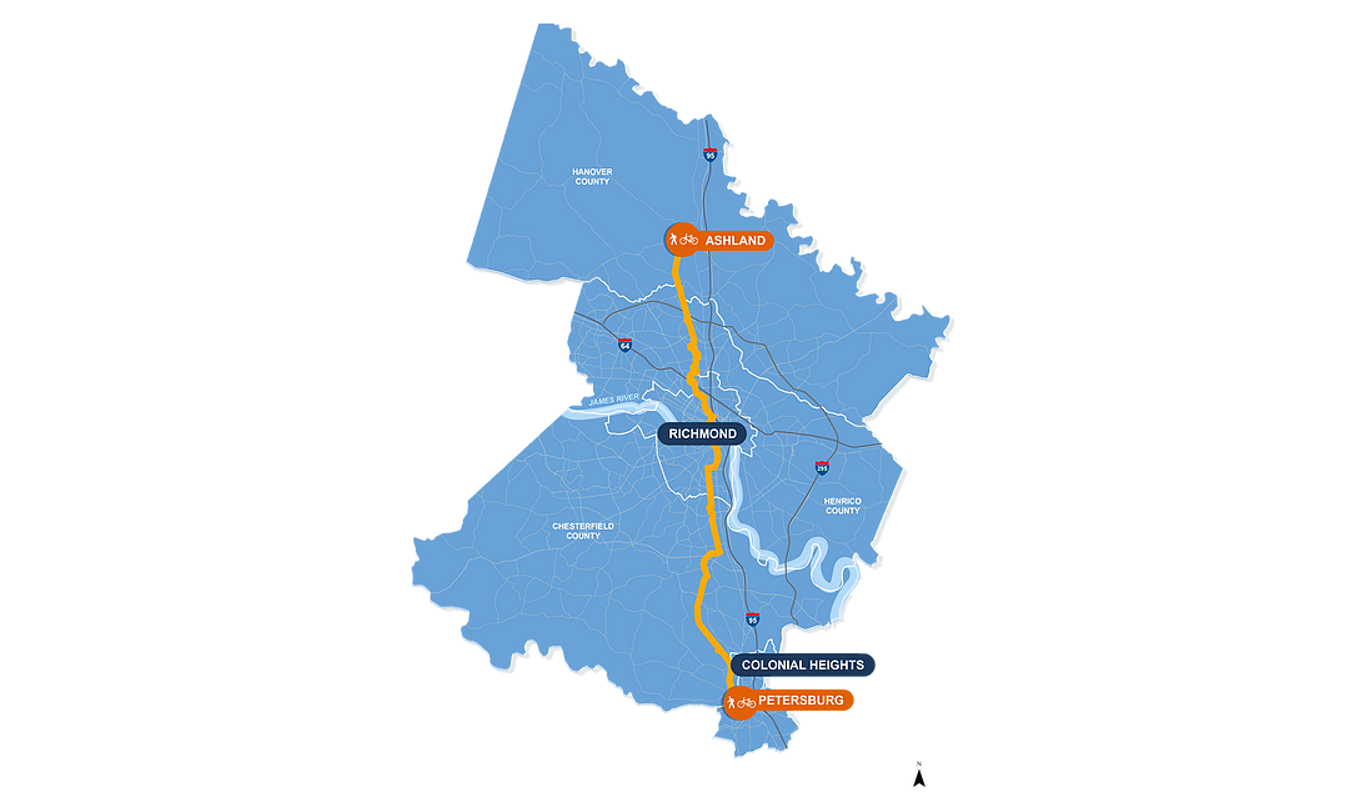 The Fall Line trail would be a 43-mile paved trail from Petersburg to Ashland.

Louise Lockett Gordon, director of Sports Backers’ Bike Walk RVA program, said the organization’s familiarity and participation with individual walking and biking projects in the region helped plant the seed for conversations about a north-south trail similar to the Virginia Capital Trail, a walking and biking trail that runs 52 miles from Richmond to the Williamsburg area.

The initial feasibility study for the Fall Line trail, originally called the Ashland to Petersburg Trail, was conducted and completed in 2019. The trail was renamed Fall Line last year.

“We took a step back and could sort of see how a trail between Petersburg and Ashland could line up with just connecting some of those planning dots,” she said.

“It will be different. Much of the mileage of the Virginia Capital Trail is in the rural landscape. In the Fall Line corridor you’ll see more of a mix of rural, suburban and urban,” Gordon said. “It becomes a regional spine, the I-95 of trails if you will, that connects people.”

Gordon said it took about 12 years to finally establish the Capital Trail, which was formally opened in its entirety in 2015. She’s hopeful the Fall Line can be wrapped up in under a decade.

“We have a lot of regional cooperation and support for this trail. I think that we’re looking at more of an eight-year window to completion,” she said.

The Virginia Capital Trail Foundation is a supporter of the project and would be open to managing the trail should it be built, the nonprofit’s Executive Director Cat Anthony said.

“We have been advocating for it as well. As the process has progressed I feel like a lot of jurisdictions have come to us for lessons learned,” Anthony said. “We’d be potentially open to (operating the trail). It would depend on a lot of conversations and resources.”

The East Coast Greenway would most likely realign along the entire Fall Line. It could also be that US Bicycle Route 1 and 76 would realign along portions of Fall Line as well. (I work for PlanRVA, the regional planning authority and would work to make these things happen if the localities want that.)

once this is completed let’s connect it East-west with multiple trails along streambeds like they’ve done in Fairfax County. I could walk for miles near Herndon without ever leaving a park like setting. It’ll provide pedestrians a multitude of passive and active recreational opportunities and keep them off of the highways.

Those who walk on or near highways aren’t doing it out of choice. The decades of bad automobile-centric design are to blame. I’ve not spotted recreational walking happening around the turnpikes of the Greater Richmond region.

Since there aren’t any Federal funds involved, prevailing wages under the Davis-Bacon Act won’t come into play. Perhaps this will result in a cost saving to the Commonwealth since non-union labor can be used.

The projected cost of $234 million for a 43 mile trail amounts to 5.44 million dollars per mile. Let’s think out of the box and determine how the cost can be reduced.

That does seem high. A typical subdivision street (with heavier pavement, curb and gutter, sewer and water) can get built for half of that. While some R/W will be required, much of the land, and even the construction, will be funded by the developers of land along the corridor while being developed.

I talked to Chesterfeild County and a normal 5 foot wide sidewalk costs 2 million to 3 million a mile but I have seen developers build the same sidewalk for a lot less for 20 dollars a square foot.

Concrete sidewalks added to existing roads are expensive. The detached paths that are proposed are more like “new” roads”, and the grades do not have to be as exact as a road. Never mind the lack of need for sewer and water or curb and gutter necessary.

There is more to it than just construction and right of way costs. There will be significant engineering costs, possible utility relocations, possible retiming of traffic signals. It’s not an apples to apples comparison to the Capital rail which did not go through any urban areas except for a small section in Shockoe bottom.

@Keith, you’re correct, which is why I shared this same link below. It suggests the preferred option for THIS trail is $2.4MM/mile in 2026 dollars. I’ve been in the civil (land development and transportation) field for 40 years, so I do have some knowledge of what these things should cost, even when the government is involved.

As a sidewalk advocate I find this price kind of insane in that there really isn’t much along also it’s not like the bike path is going to knock down homes or buildings in it’s path.

The Davis-Bacon wages for laborers in Richmond are $15.74/hour plus $2.05 in fringes. The market is paying over $20/hour for labor right now, so fears of prevailing wage requirements appreciably impacting costs are unfounded. The cost to administer prevailing wage requirements is also insignificant. There is little to no actually unionized labor in the Richmond horizontal construction market.

Anytime purchase of additional ROW is made costs spiral. Adding a sidewalk is completely different than building and sidewalk together. Plus, even though there is no curb and gutter there is impervious service involved and since it is in the Ches-Bay watershed that means drainage requirements including drainage ponds. If you don’t like the rules have the GA change them, but for now they are the rules and must be followed.

@David, while I agree with much of your post, no one is suggesting circumventing development standards or rules to save money. Saving costs should always be a goal, and their are newer methods/alternatives to the older style SWM ponds of the past to go along with newer regulations.

I know there are cost for the right of ways, etc. (Even though it appears to me that a good portion is in existing right of ways already). To put $5M a mile into perspective, a 50′ right of way over a mile is 6 acres. There are some great neighborhoods in Richmond where you could buy 6, one acre lots and get 6 four thousand square foot homes on them and not be at $5m. Building a 8′ wide path for a mile should not cost more than building six very large houses on the same area.