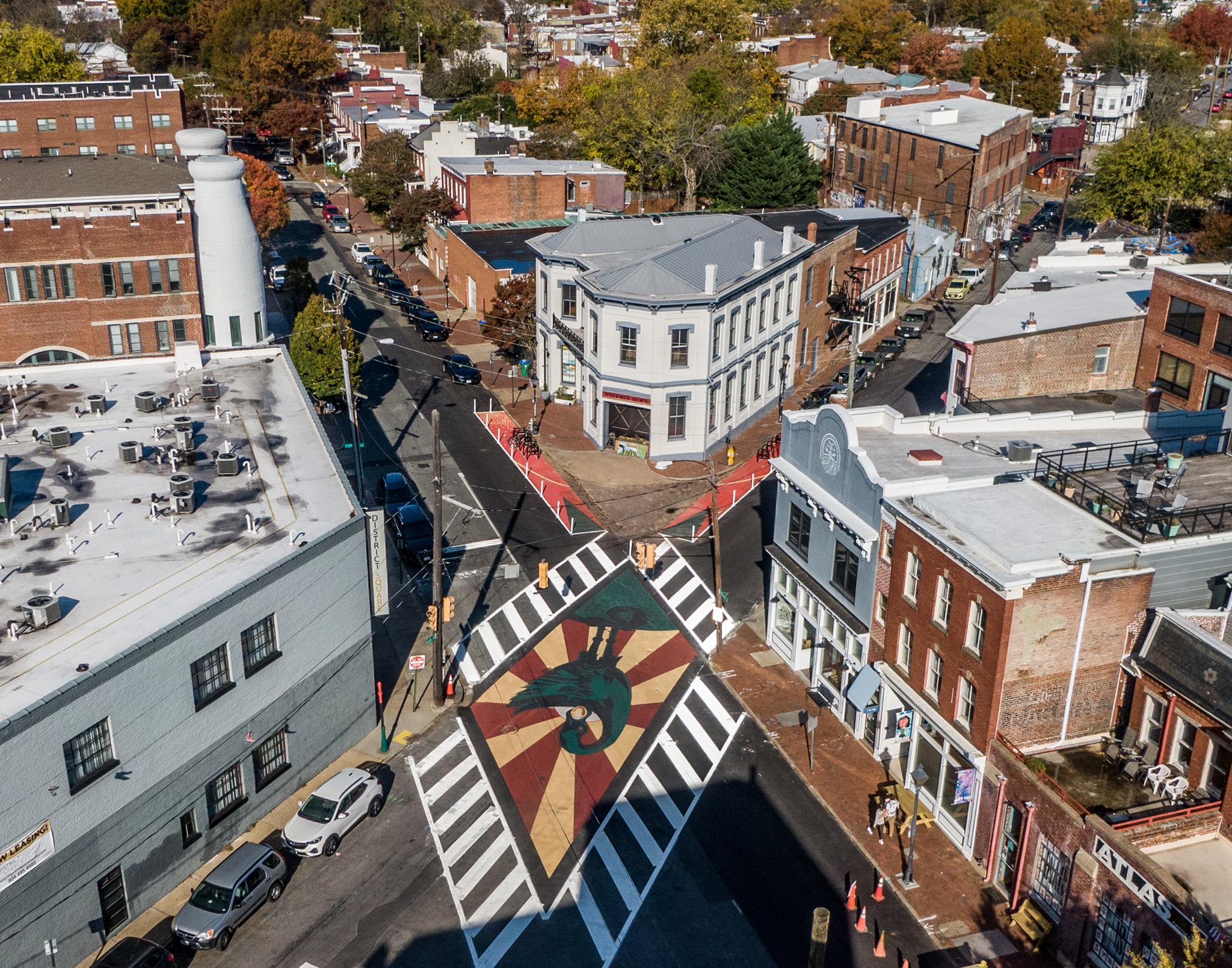 The intersection of Brook Road and Marshall Street has been enhanced with a street mural, a pedestrian plaza and a parklet. (Photo courtesy of Venture Richmond)

As two other parklets in the city remain in limbo, the last of an initial wave of the pop-up patios that have been in the works over the course of the pandemic has been placed as part of a larger intersection enhancement.

Richmond officials and supporters recently celebrated the completion of a three-pronged project to enhance the oblique crossroads of Brook Road and West Marshall Street in Jackson Ward.

Funded with a $25,000 grant from Bloomberg Philanthropies’ Asphalt Art Initiative, the project included a custom-designed parklet in front of Art180, a pedestrian plaza beside Gallery 5, and a street mural within the intersection’s crosswalks. 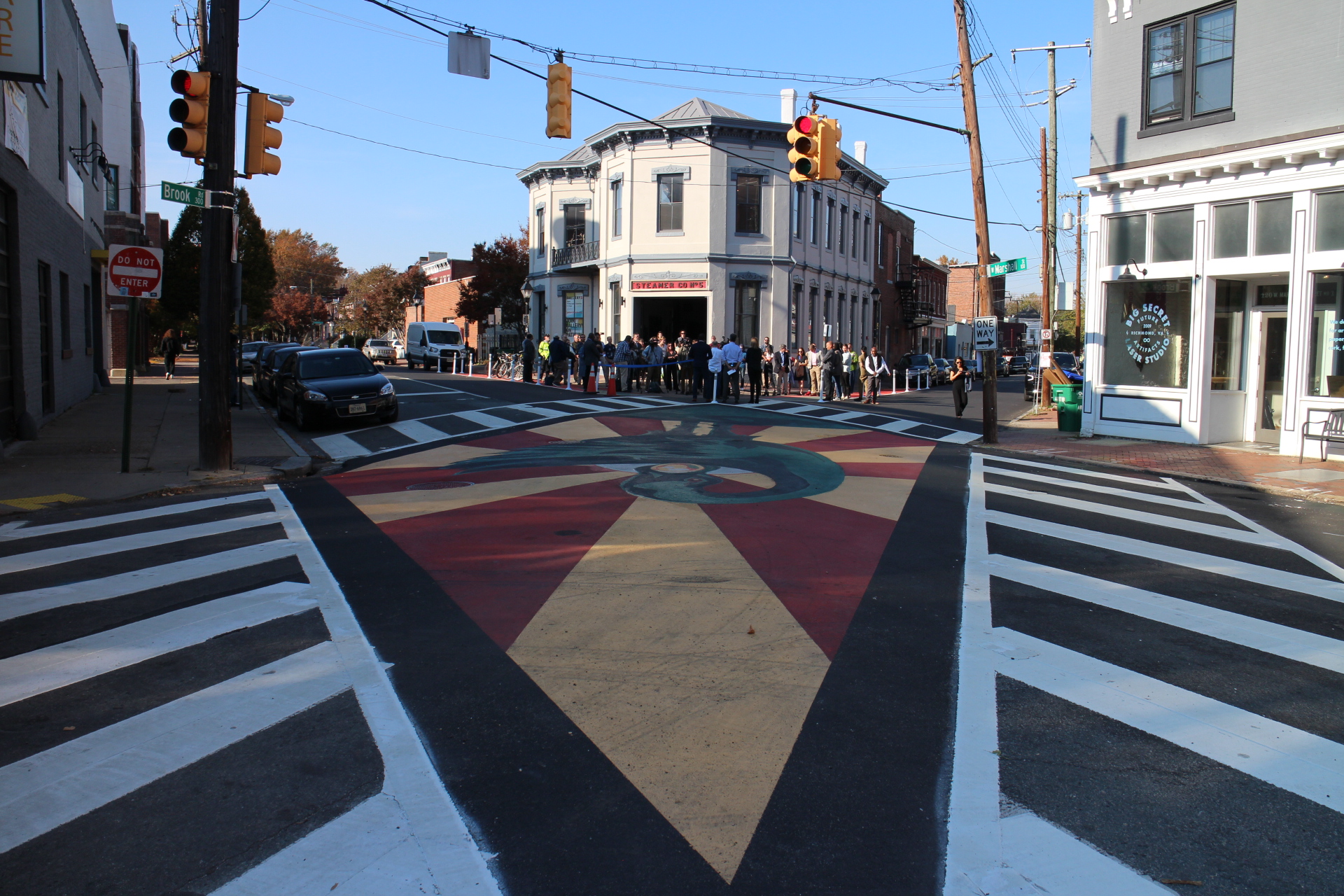 The mural in front of Gallery 5 features the colors of the Pan-African flag. (Jonathan Spiers photos)

In the works for two years, the project was led by Venture Richmond and the City of Richmond Public Art Commission, which were jointly awarded the grant. Support also came from neighborhood businesses including Art180, Gallery 5, Big Secret and Walter Parks Architects, which designed the parklet.

Filling the length of two on-street parking spaces, the deck-like structure outside Art180 is one of two custom-designed parklets that have been planned and funded separately from the city’s “Picnic in a Parklet” program, which paid for and installed five single-space parklets in different locations earlier this year.

Introduced in Richmond amid the coronavirus pandemic, the open-air structures are meant to provide public gathering spaces that also can help businesses that lack outdoor seating.

While the Jackson Ward parklet is in front of an art gallery, the five city-funded parklets were all placed outside food-and-beverage businesses that requested them through the program. 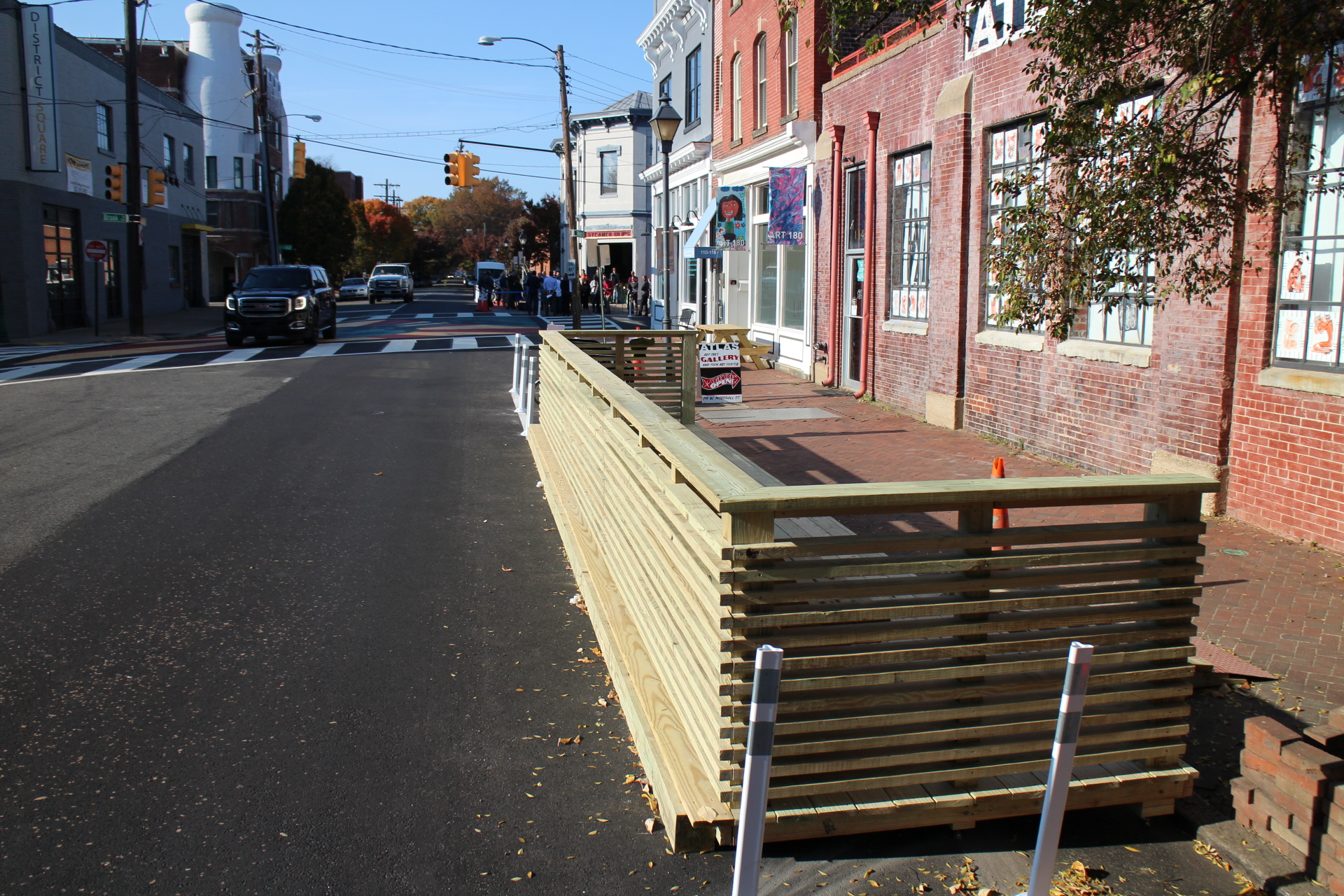 The parklet outside Art180 is intended for youth program participants to gather before and after class.

The Art180 parklet, according to a release from the city, is intended as a space for participants in the gallery’s youth programs to gather safely before and after class. Because the structure is placed within city right-of-way, it also is open for use by the general public.

The gallery’s youth program participants painted the mural, which was designed by local artist Chris Visions. Featuring an Andikra symbol from Ghana meaning “to go back and retrieve/get,” the mural incorporates the red, black and green colors of the Pan-African flag, in further reference to Jackson Ward’s history as a hub of black culture and community.

The mural was extended to create the pedestrian plaza, which restored old brickwork that was hidden beneath the asphalt and includes bike racks provided by Venture Richmond.

Venture Richmond’s Max Hepp-Buchanan, who helped steer the project, was among those on hand for a ribbon-cutting ceremony earlier this month, along with Mayor Levar Stoney, city planning staff and representatives from Art180, Gallery 5, Walter Parks and the Public Art Commission.

The ceremony was held as two other Richmond parklets remain in limbo.

One of the five city-funded parklets, which were purchased at $10,000 apiece, was removed this fall from in front of Joe’s Inn in the Fan, after the restaurant determined that its patrons weren’t using it.

A new location for the parklet – a prefabricated, modular structure designed to be portable and relocated as desired – has not been announced by the city. Jason Alley, who helps manage the parklets as Richmond’s policy adviser for restaurants and small business, said the location could be decided in coming days.

Meanwhile, the other of the two custom-designed parklets, this one planned along Brookland Park Boulevard, is apparently moving forward after being put on hold due to opposition from neighbors. 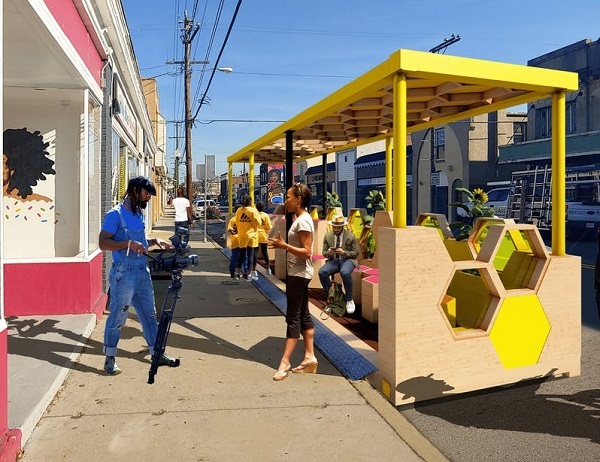 Brandi Battle-Brown, who requested and raised funds for the parklet that’s been planned outside her Ms. Bee’s Juice Bar, said a compromise had been reached to place a smaller version of the parklet in front of her business.

Ann-Frances Lambert, the area’s City Council representative, confirmed the arrangement, which she said was reached after meeting with Battle-Brown, Hepp-Buchanan and the opposing business owners, who had contended that the parklet’s size would obstruct their storefronts and reduce needed parking.

Lambert said the parklet would be reduced from its original 28-foot length, with a planned canopy removed to maintain visibility of storefronts. She said the smaller parklet would be placed in the spring on a six-month trial run.

“The compromise is for her to have the parklet in front of her business for six months, so that we can see how the parklet is being used. Just like Joe’s Inn, it may not be the thing to do,” Lambert said.

Lambert said a rendering of the parklet had presented the structure as larger than it would have been, fueling the concerns from neighboring businesses on that block.

“The rendering misled the community, and that’s what everyone really got up in arms about,” Lambert said. “When you take the canopy off, it’s only going to be four feet high. It doesn’t visually block the other businesses if it were to be in front of them. But it’s not going to be, because they’re going to adjust it to be right in front of Ms. Bee’s.” 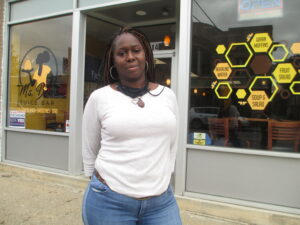 Battle-Brown said she’s glad the parklet will go forward, even if it’s not the version that secured city approvals over the past year. Designed pro bono by HKS Architects, the parklet was funded with private donations and a $20,000 grant that Venture Richmond helped secure.

“It’s very good news for me, but the parklet has already been built,” Battle-Brown said several weeks ago, adding that the structure will need to be reworked. “I appreciate the neighborhood’s support with sending out emails and doing everything they can to support me. Some of the business owners played a big part in speaking up for me.”

I love public art and glad to see new projects, but how long with this mural last on an intersection? In addition to constant auto traffic, what about street sweepers and snow plows? It’s free money from Bloomberg, so I guess it it doesn’t matter? Did any of that $25k get set aside for maintenance? I just wonder how much it will cost to have it repainted next year or sandblasted to keep it from looking like a Benjamin Moore truck turned over in that intersection.

Maintenance money…..what city do you think you are in. Go look at the crossing signs put up in the spring in Fan, Carytown, Museum District and beyond. I bet 65% or more are gone and the city does not have a penny to replace them. They too were grant installed. Give it 1-2 years and it will be as a faded as the RAMS/VCU street arts that was painted around campus.

SO glad to see Ms. Bee finally getting her parklet! As a neighborhood resident, when I am on BPB, I am on foot. And when I’m walking that corridor, I *always* have my dog with me. Many times I’ve wanted to patronize Ms. Bee’s but can’t because there’s no place to tie off my pup and so, I have to keep going until I get to an establishment with a patio or hitching post.
Excited to support Ms. Bee’s in the near future!

I know I’ll just come across as a grumpy old man and, indeed, I can see the beauty in parklets, but I hate them. To me, it’s tantamount to building a really cool bar on the runway at the airport. It seems there could be better use of the space such as, oh, I don’t know, a parking space?