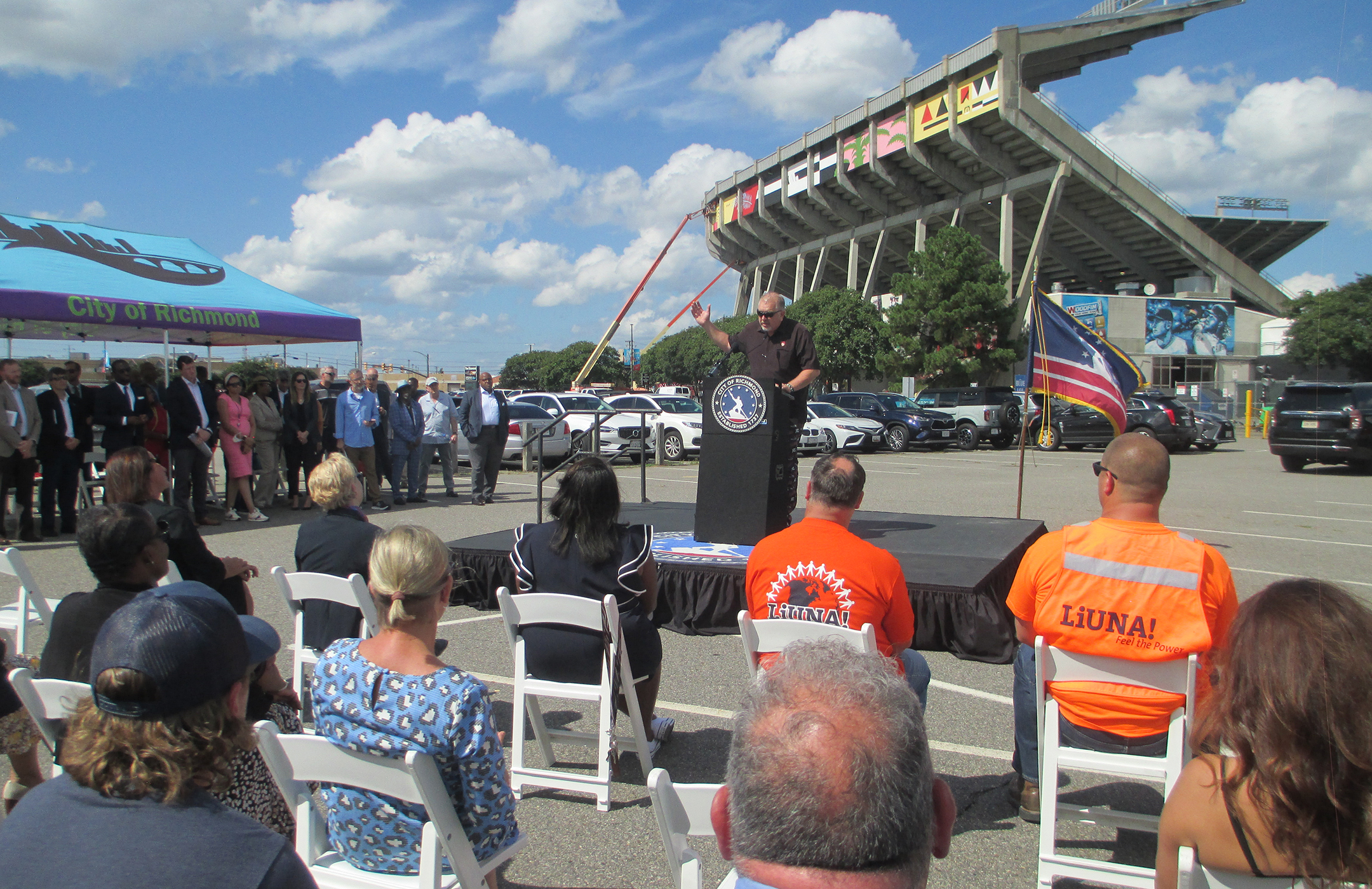 City leaders, Flying Squirrels staff and others gathered outside The Diamond to announce the selection of a development team for the Diamond District project. (Jonathan Spiers photos)

With a development team selected for Richmond’s Diamond District project, city leaders on Tuesday celebrated the start of what’s projected to be a 15-year effort with an investment totaling $2.4 billion.

At an event in The Diamond parking lot, speakers from the city, VCU and the Richmond Flying Squirrels lauded the selection of development team RVA Diamond Partners, which the city plans to work with to replace the aging stadium and redevelop the surrounding 67-acre area.

Among those who spoke were Flying Squirrels President Lou DiBella and COO Todd “Parney” Parnell, who both expressed emotion at arriving at this point after over a decade of promises of a new ballpark to call home.

“If you would have told me when we moved here that 13 years later we’d still be playing in this wonderful monstrosity of fun, I would have told you you were nuts,” DiBella told the crowd. 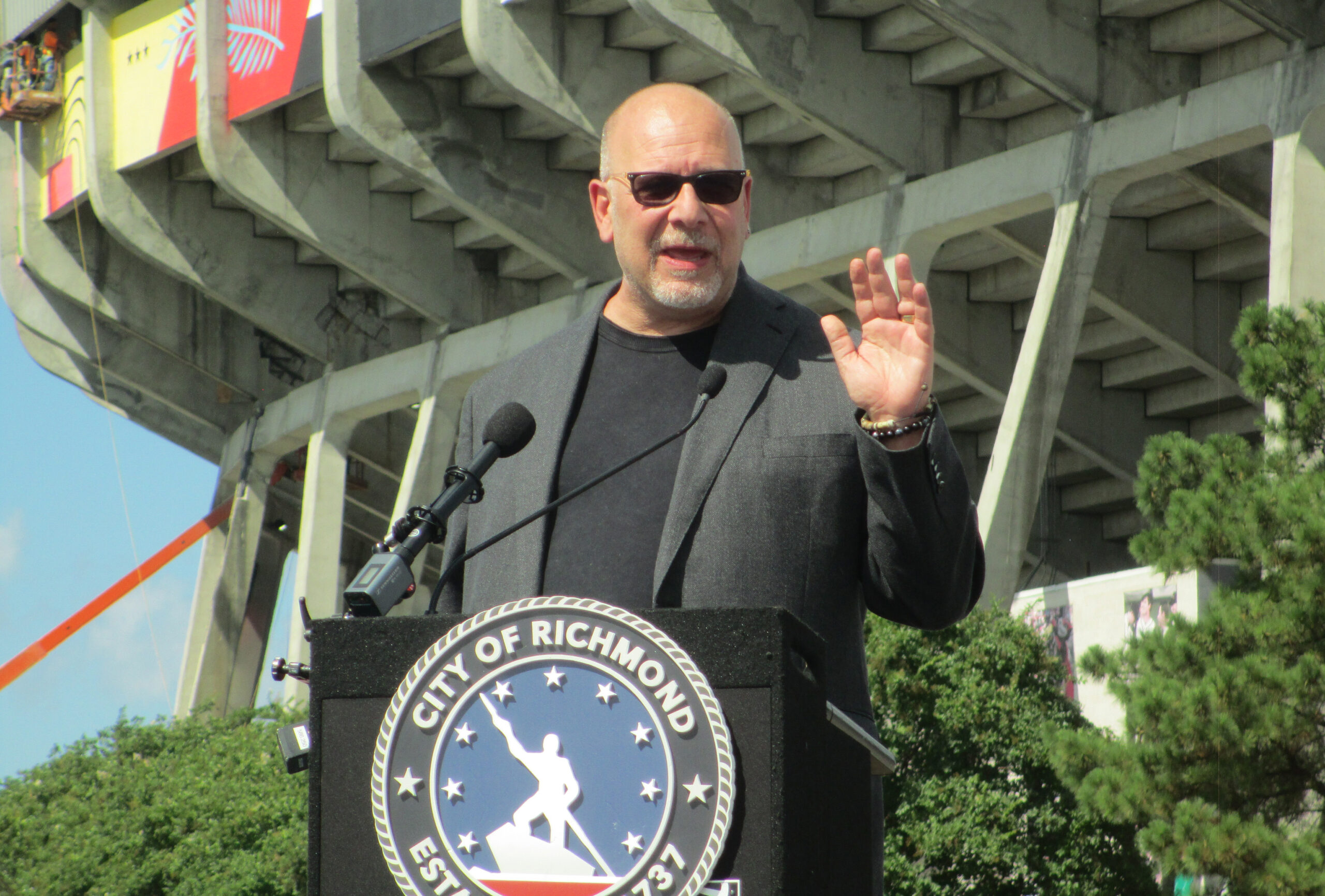 “We have never felt anything but love for this city,” said Flying Squirrels President Lou DiBella.

“I’m not going to tell you I didn’t have moments of doubts that we would get here, but they went away with time, because we have never felt anything but love for this city.”

Choking up, DiBella added, “We weren’t willing to go somewhere else.”

“This is an emotional day for us. We’ve been dreaming about this moment for a long time,” Parnell added. “Thank you all for being here on what I feel is truly a historic day. We are incredibly grateful to everyone.”

The event ceremonially kicked off work on the first phase of the project, which is centered on replacing the 37-year-old Diamond with a new 10,000-capacity stadium by the start of the 2025 season. That’s the deadline set by Major League Baseball for all pro baseball facilities – both major and minor league – to meet new facility standards, which The Diamond does not. 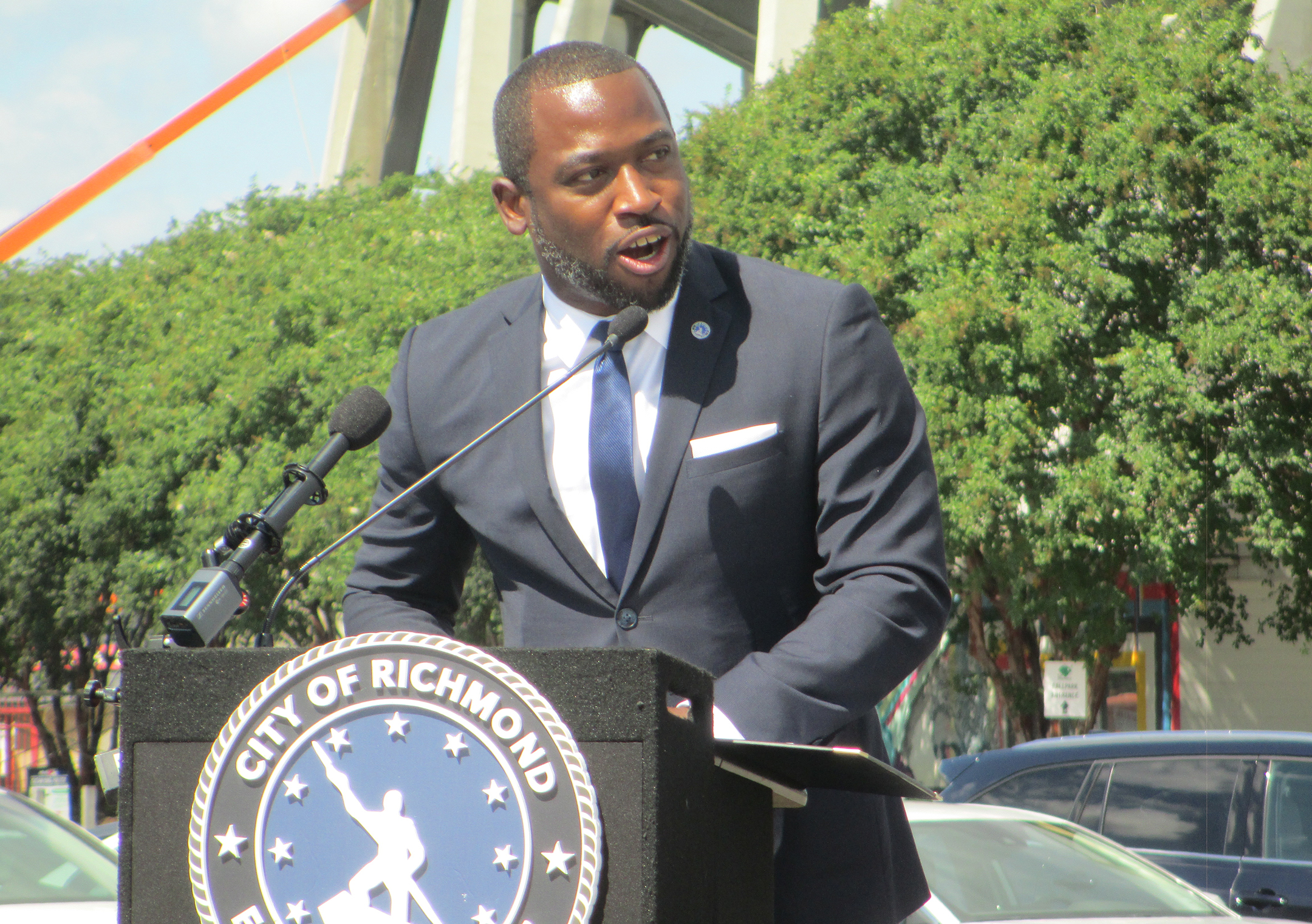 “There is nothing minor league about any of this,” Richmond Mayor Levar Stoney told the crowd.

While the Flying Squirrels are the Double-A affiliate of MLB’s San Francisco Giants, Richmond Mayor Levar Stoney declared at the event, “There is nothing minor league about any of this. This is a major league investment in the people of Richmond.”

They’re heading up the team along with D.C.-based Republic Properties Corp., whose mixed-use projects there include Washington Harbour on the Georgetown waterfront. Republic’s Jordan Kramer was also in attendance but did not provide remarks.

“We’re very much looking forward to a partnership with the city, the Flying Squirrels and VCU,” Guillot said. “The city of Richmond is literally on the rise, and the opportunity to create a new 67-acre neighborhood where people can live, work and play, with the beloved Flying Squirrels as the anchor tenant, is a once-in-a-lifetime opportunity.” 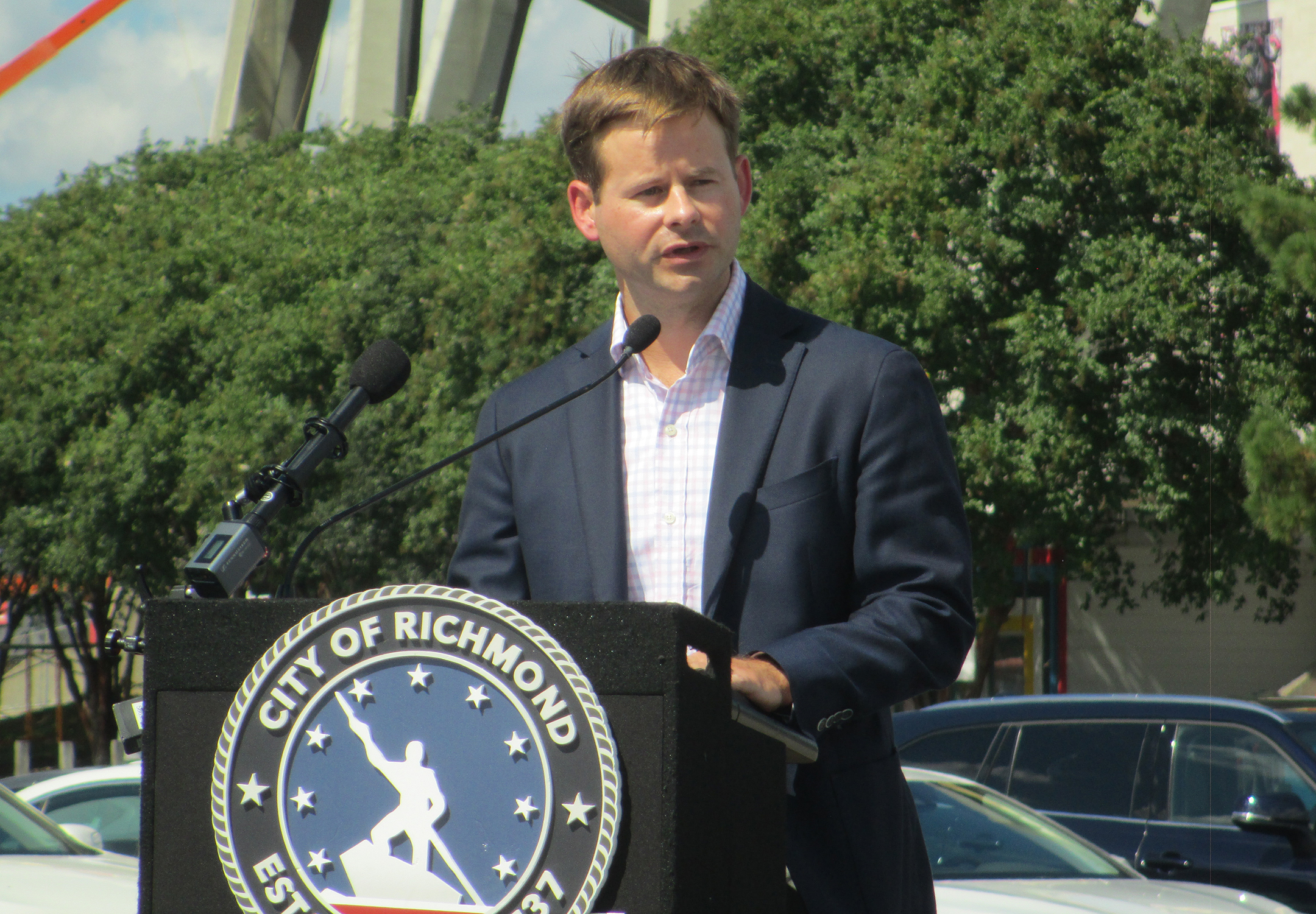 Jason Guillot of Thalhimer Realty Partners is among those heading up the RVA Diamond Partners team.

In a statement, Machete Group’s David Carlock expressed the team’s appreciation for being considered.

“We would like to thank the City of Richmond for including us in a well-run and efficient process,” Carlock said. “Our team has enjoyed working closely with the city and engaging with the community over the past several months. We would also like to congratulate the team at RVA Diamond Partners and wish them luck bringing the project to life in the coming years.” 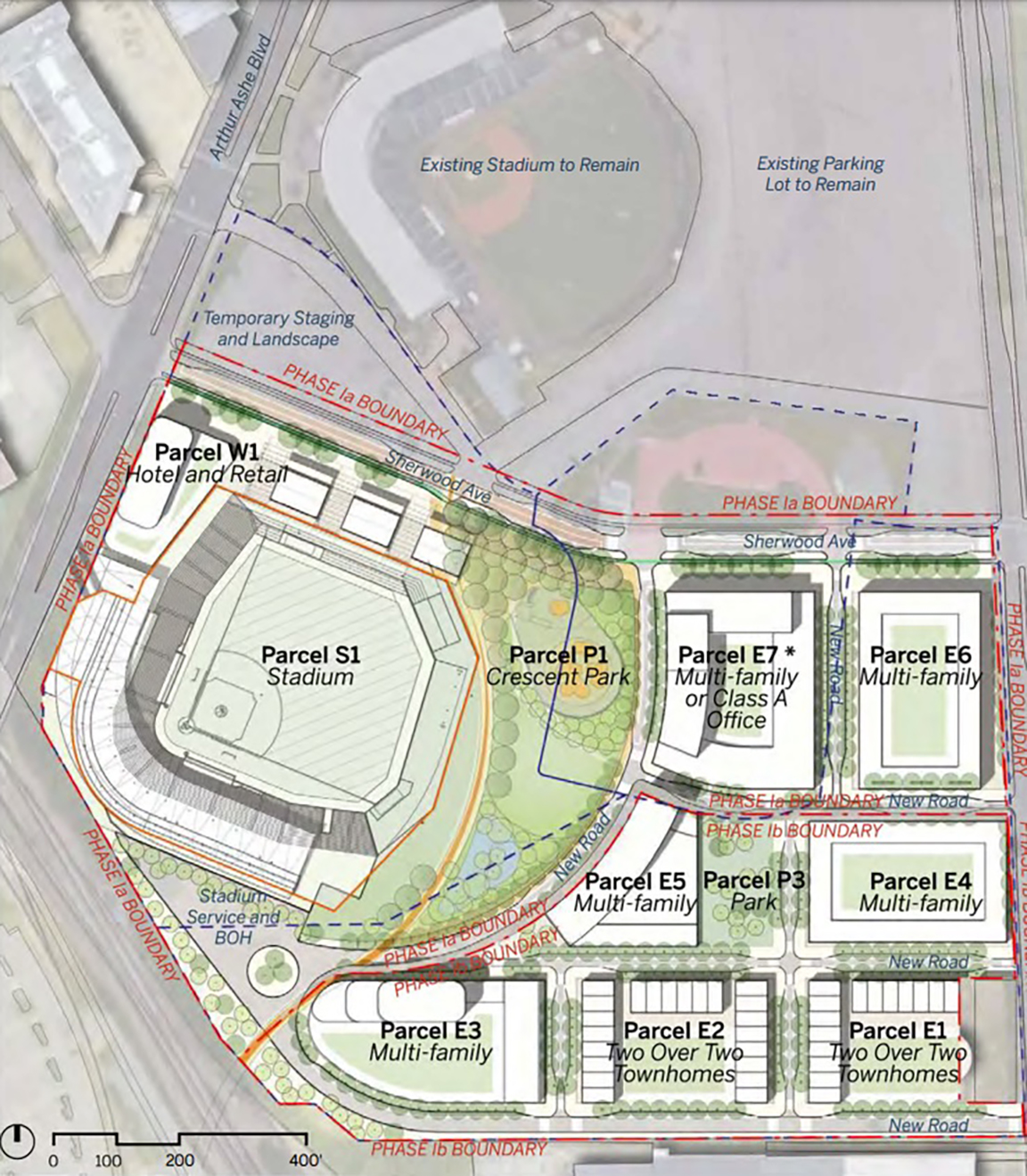 A site plan for the first phase of the project shows the new stadium in the Diamond District’s southwest corner. (Images courtesy of city documents)

The selection announcement was formally made through an introduction of ordinances that the City Council could vote on at its Sept. 26 meeting. The ordinances include a term sheet that resulted from the city’s negotiations with RVA Diamond Partners that’s planned to be approved later this year.

The term sheet lays out proposed minimum business terms and conditions agreed to between the parties. It also shows how the first phase of the project is expected to play out, including the construction of the new stadium, which would seat 8,000 with space for 2,000 standing-room patrons.

RVA Diamond Partners would pay the city $16 million for the first-phase property, consisting of 21.8 acres at 2728 Hermitage Road and 2907 N. Arthur Ashe Blvd.

About 6 acres of the latter property would be leased by the Richmond Economic Development Authority, which would enter into lease agreements with the Flying Squirrels and VCU for use of the new stadium. The stadium would rise in the district’s southwest corner at Arthur Ashe Boulevard and the railroad tracks.

The first phase would also include at least 1,134 residential units, 20 percent of which would be lower income with 184 units rented at 60 percent of the area median income, 39 units at 30 percent AMI, and 20 units set aside for public housing residents with project-based vouchers.

Ninety-two for-sale residential units would also be built, with 20 percent of those aimed at lower-income households, including 18 units at between 60 to 70 percent AMI.

The phase would also include 58,000 square feet of retail, about 1,700 structured parking spaces and 50 surface spaces, and a 180-room hotel totaling about 109,000 square feet. Talks between the parties said that the hotel brand, to be approved by the city, would be along the lines of a Curio by Hilton boutique hotel.

Rounding out the phase is a public park along the lines of the crescent-shaped park envisioned in the city’s Richmond 300 master plan. 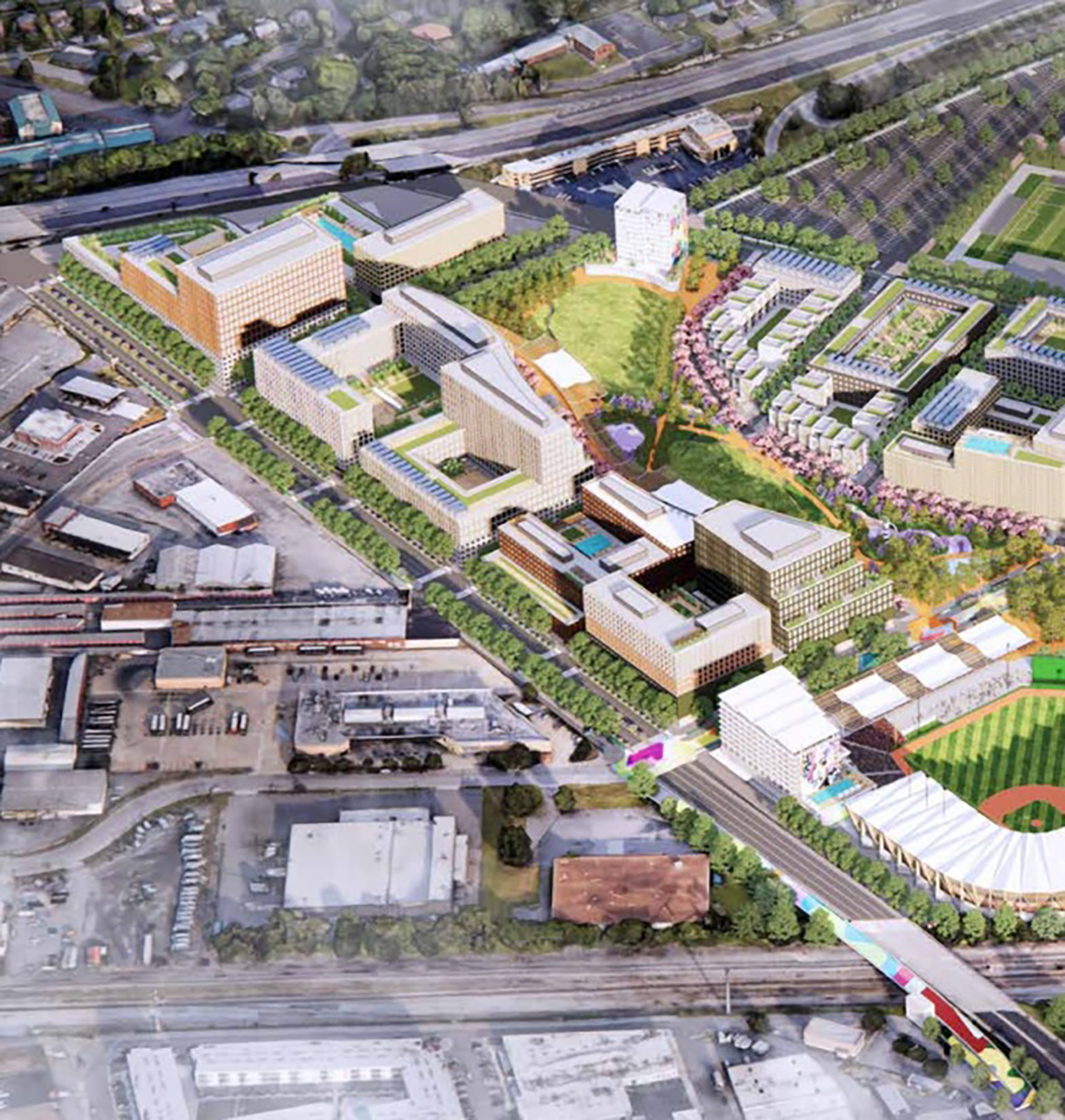 A rendering of the Diamond District development as it would appear along Arthur Ashe Boulevard.

Minimum investment in the first phase is projected at $627.6 million, contributing to a total project development cost for the entire Diamond District area of $2.4 billion.

The project would involve the creation of a community development authority (CDA), a form of tax increment financing that local governments can use to help finance a project using tax revenues generated over time. Such revenues – from real estate, admissions and BPOL taxes, as well as portions of meals tax and state sales tax – would be restricted to those produced only within the 67 acres that make up the project area.

After CDA bond debt repayment, the project is projected to generate $156.2 million in general fund revenue from the first phase over a 30-year period. Rent from stadium leases and other stadium-generated revenues would be used to pay debt service on bond financing.

The term sheet states that bond financing “shall be nonrecourse to the City; therefore, not requiring a moral or financial obligation from the City.” The financing would have a special assessment requirement that, the document states, “obligates the Developer and other future landowners within the District to pay all debt service payment shortfalls in the event the revenues generated in the CDA District are not sufficient to pay debt service payments.

RVA Diamond Partners would purchase approximately $20 million of the initial series of bonds for the financing.

A public meeting on the project and selection process is scheduled at 6 p.m. tonight at the Bon Secours Training Center at 2401 W. Leigh St. The meeting will be livestreamed. A telephone town hall also is scheduled Tuesday, Sept. 20, at 6:30 p.m. Participation instructions and more information are available on the project’s website.

Looks like a great development. Having a minor league baseball team is definitely an asset to any city. I hope that somewhere in the plans the city has given thought to connecting this project to Scotts Addition so people do not have to walk on or across busy streets. I think Las Vegas thought of this 25 years ago.

Part of the 300 Master plan had a park/pedestrian crossing that was to be built over the train yard – I’m hoping that is still viable now that we have an actual development in the works.

“Minorities will do 40% of the work” – Levar Stoney

This quote was not included in the article and I can understand why. Instead of grossly overpaying to include minority participation how about letting the best qualified contractors with competitive pricing preform the work? Has common sense and logic truly escaped us?

Looking forward to the project though…..

It appears that during phase 1 the existing surface parking lots will be used, but where will stadium parking be located in the future?

Parking will be included throughout the development and the existing lot is staying put since it’s needed for the existing ballpark until the new ballpark is complete.

Parking will be virtual for the meantime as to not disturb the race to the finish line.

It’s a legit question once the surface lot is eliminated several years from now. It was the biggest hangup for the ballpark in Shockoe. 70% of the fans drive in from the adjacent counties. The squirrels may have to change their marketing to attract a higher percentage of ticket sales within walking distance or find remote parking opportunities and bus the suburbanites to the games.