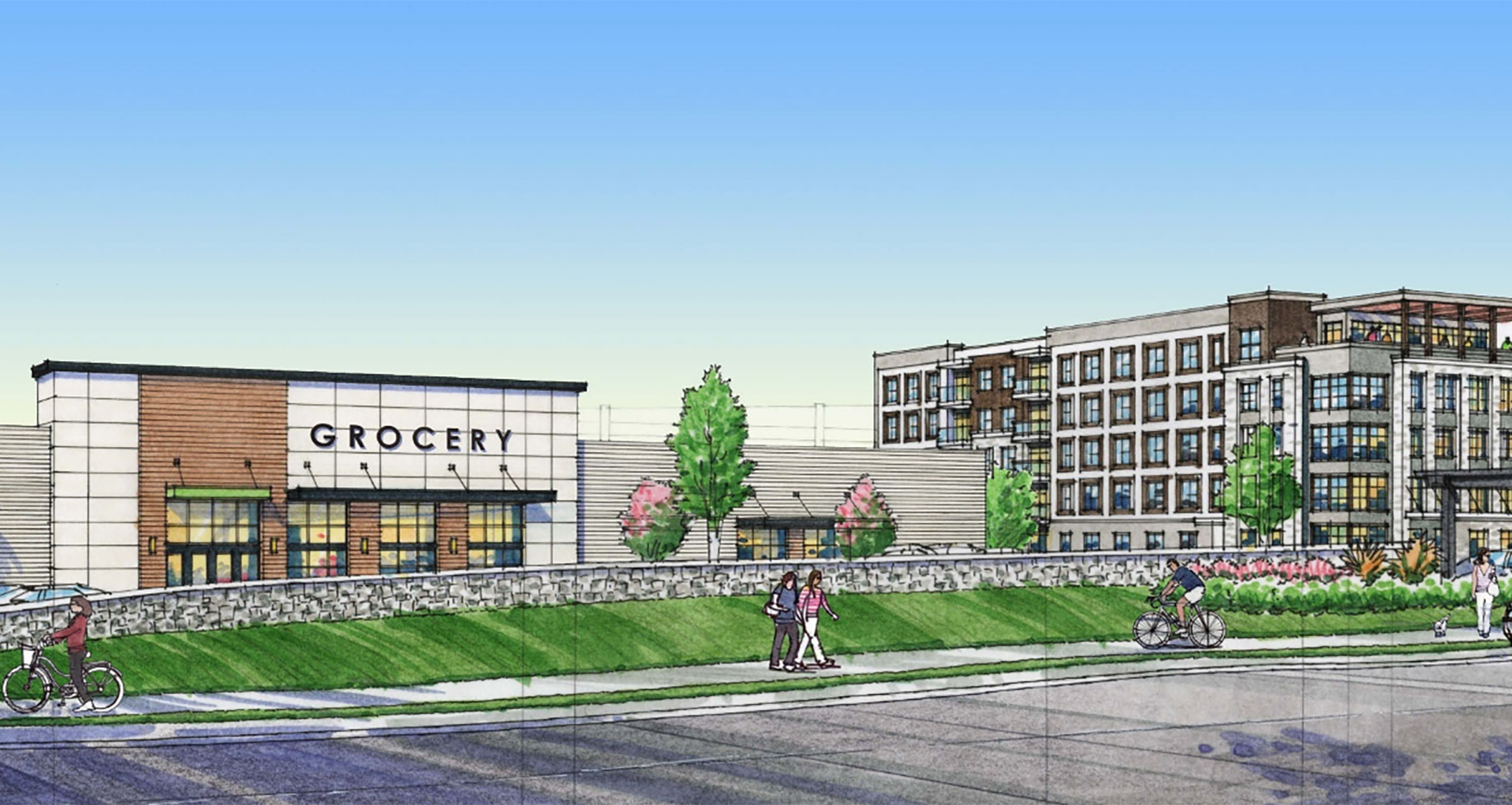 Midlothian Depot would be anchored by an unspecified grocery store tenant. It would also feature 350 apartments and 30,000 square feet of commercial space. (Images courtesy of Chesterfield County)

Chesterfield planning commissioners are expected to consider a proposal next week that would bring a new grocery store to the Midlothian area along with new restaurants and hundreds of apartments.

Atlanta-based developer SJC Ventures is pitching a $175 million project anchored by a yet-to-be-revealed grocery store of 43,000 square feet at the corner of Midlothian Turnpike and Alverser Drive.

There would also be 30,000 square feet of retail space and 350 apartments built as part of the project, which is called Midlothian Depot.

The development would rise on an assemblage of 13 acres at 11706 and 11800 Midlothian Turnpike, 951 Alverser Drive and 11621 Old Buckingham Road, according to a county staff report.

The commercial element of Midlothian Depot would be concentrated on the land closest to the Midlothian Turnpike and Alverser Drive intersection. The apartments would be built farther back and would include a rooftop terrace, pool and structured parking.

If approved, SJC Ventures plans to break ground early next year. Atlanta-based Dynamik Design is the project’s architect. A general contractor hadn’t been selected as of this week.

SJC Ventures Principal Jeff Garrison declined to comment on the identity of the development’s planned grocery store in an interview this week. The grocery store box is dubbed in the county staff report as “Major Tenant X.”

The company’s work frequently features grocery store anchors. Of the 19 completed grocery-store-anchored projects listed on its website, 16 of them are listed as anchored by Whole Foods Market. 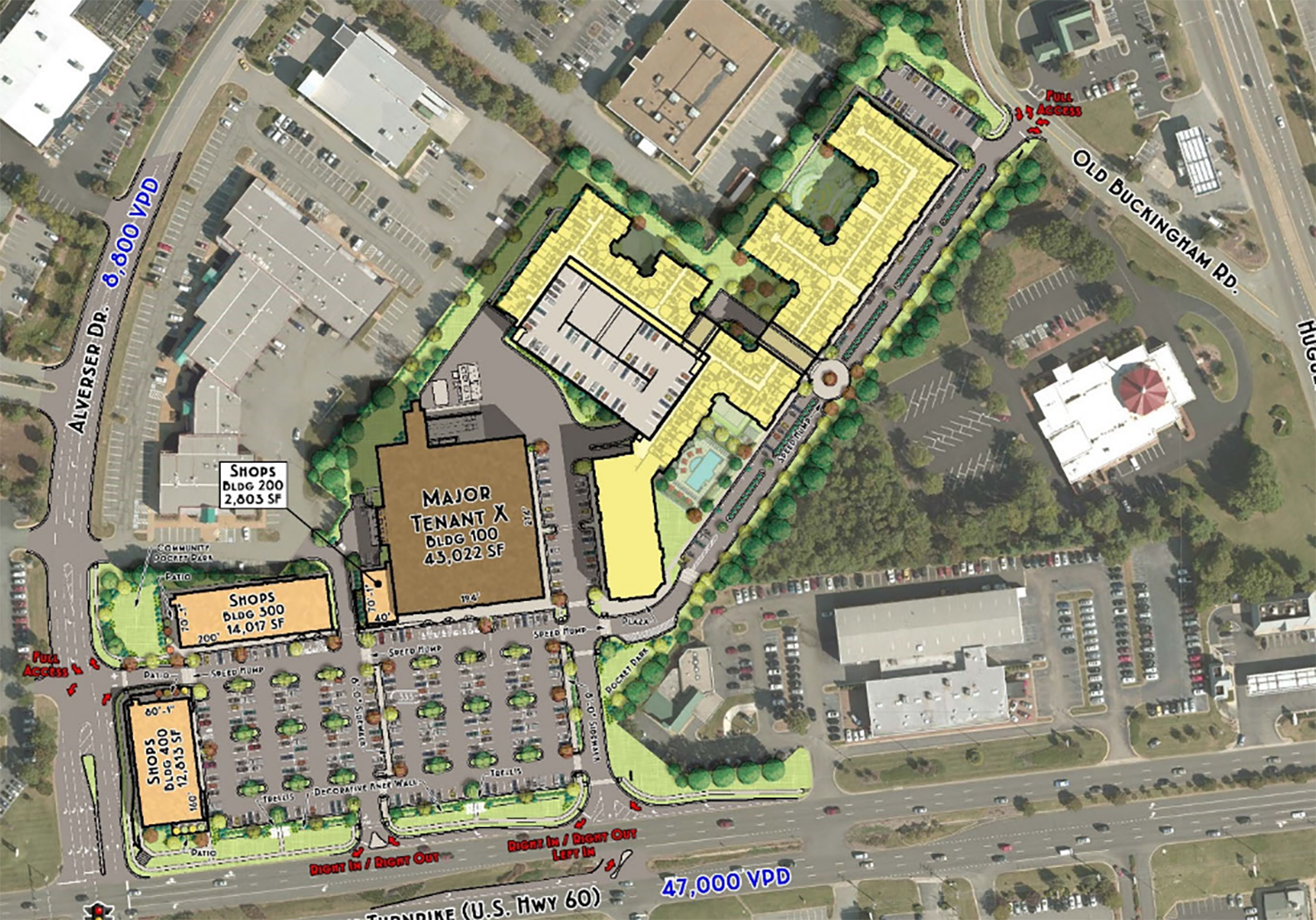 Whole Foods didn’t respond to an email seeking comment Thursday about whether it will anchor the new development.

Garrison said the company is already in talks with additional tenants to help fill out Midlothian Depot.

The project site is mostly undeveloped but does include several buildings that front Midlothian Turnpike. The properties are collectively valued at $3.5 million, according to online property records.

Midlothian Depot, which Garrison said has been about a year in the making, would be the second SJC Ventures project in the Richmond region. It built Short Pump Station in 2008, when the firm was known as S. J. Collins Enterprises. The company sold the center in 2010.

SJC Ventures’s other credits in the Old Dominion include Whole Foods-anchored The Marketplace At Tech Center in Newport News and Fresh Market-anchored Lakeside Crossing in Lynchburg, according to its website. The company also built Whole Foods stores in Virginia Beach and Charlottesville.

“We’ve got a lot of relationships in Virginia that we continue to leverage to make this the best concept,” Garrison said.

Unless these new businesses come with $100k paying jobs, they will be as understaffed as every other retail/restaurant in the vicinity. That’s overlooking the 12 grocery stores within 3 miles of the proposed location, and that’s not counting Costco and Sam’s Club. Just because there is land available doesn’t make it a good fit for the area.

I really find the jobs in this area totally out of place with the housing market I notice that they are going wild building $500,000 dollar plus homes and $1,500 dollar rent apartments but the bulk of the jobs are low wage store jobs and wharehouse jobs that barely pay more then $15.00 when you would need to at least make $20 dollars a hour to afford all these places.

This project will set up a new beach head for the sidewalks on Route 60 but I hope Chesterfield County asks for enough sidewalks to build a loop around it on Huguenot Road and Route 60 and Old Buckingham and Alverser Drive.

It would be great if sidewalks could be placed along the entire Old Buckingham corridor along with a stoplight at the intersection of Old Buck and Alverser.

I can’t imagine why the County allowed the Wegmann’s shopping center to be built without requiring sidewalks fronting Midlothian Tpk. Makes all their talk about creating a “village” atmosphere and walkability appear to be simple BS.

More traffic in an already congested area. Do we really need another grocery store?

Personally, I do not think it will be a Whole Foods. I think it may be Harris Teeter’s first location in Richmond, and that’s why the name of the tenant is under such a tight lip. The Kroger (who owns the Harris Teeter chain) at Bellegrade and Midlothian are over performing because Publix has not put a dent in their sales. Kroger may lose a few sales to a Harris Teeter, but since Harris Teeter is like Ukrop’s in being upscale, it will hurt both the Publix stores at Huguenot Village and Midlothian. We will find out!