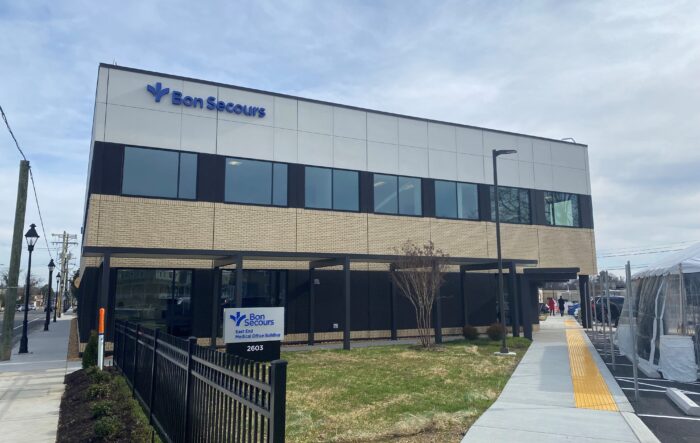 As it unveils a newly built medical office building at Richmond Community Hospital, Bon Secours is turning its attention to other projects in the vicinity after national scrutiny over its use of a drug-discount program at the East End hospital.

Those new efforts, which include plans for an East End urgent care center among other projects, were announced this week during a ribbon-cutting ceremony for the new office building.

The 25,000-square-foot, two-story building at 2603 Nine Mile Road is the latest addition to the campus of Richmond Community Hospital.

The office features a partial hospitalization program for adolescents and adults with behavioral health or substance abuse problems, and a tele-consultation call center for behavioral health needs. Also at the office is the headquarters of the Instructive Visiting Nurse Association, which is a Bon Secours-affiliated, in-home health group.

About 150 full-time equivalents are based at the office, according to a Bon Secours news release.

Construction on the building broke ground in early 2022 and was completed in December. The project architect was Baskervill and the general contractor was Gilbane.

When the project broke ground in early 2022, Bon Secours expected the structure would cost $11.5 million to build. The project’s cost grew due to increased construction costs, Bon Secours Richmond president Mike Lutes said in an interview prior to the ribbon-cutting event.

The new building comes as part of a 2013 agreement between Bon Secours and the Richmond Economic Development Authority that also involved agreements related to the Washington Commanders training camp and redevelopment of the Westhampton School property.

Bon Secours was on the hook to make a capital investment of at least $8.5 million at the East End hospital’s campus, build a 25,000-square-foot medical office and add 75 full-time equivalent jobs to the campus among other requirements, according to the release. 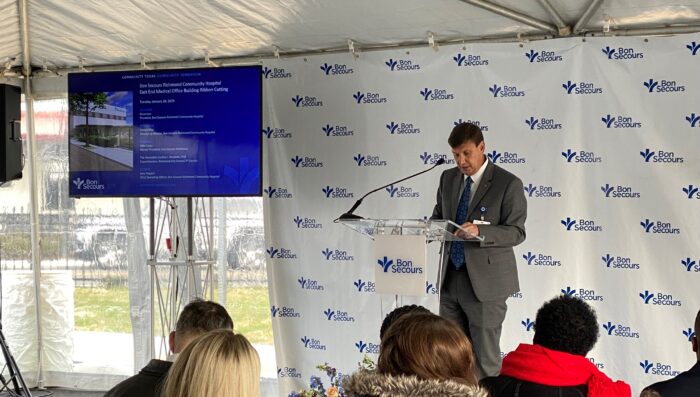 The ribbon-cutting ceremony, held in the parking lot of the new building, came in the wake of scrutiny of Bon Secours’s usage of a drug-discount program at Richmond Community.

The New York Times reported in September that Richmond Community had the highest profit margin of any Virginia hospital as a result of the federal 340B program, which permits medical facilities in low-income areas to buy discounted prescription drugs but also get full insurance reimbursements of the drugs’ typical costs and keep the difference.

The program is designed to help hospitals in low-income areas save money and invest in services, but The Times found Richmond Community has had its capabilities reduced amid investments by Bon Secours in other local hospitals.

Lutes, who started his gig as the health system’s Richmond market president in October, criticized the reporting during his event remarks. He used the venue to announce a three-year plan to invest further in the East End that Bon Secours has dubbed “Community Today, Community Tomorrow: Pathway to Wellness in the East End.”

“I joined the ministry just after a misleading narrative cast a pall on our utilization of our 340B program, our commitment to the East End community and the quality of care provided here at Richmond Community Hospital,” Lutes said. “It inaccurately reflects who we are, what we’ve done and what we’ll continue to do in this community. At the same time, we are not perfect. There have been times we have fallen short of our own high expectations.”

Bon Secours shared during the event that the Richmond market saved an average of about $53.3 million per year from 2019 to 2022 thanks to the drug discount program, and contrasted that with average spending by Bon Secours of about $237.6 million annually on financial assistance to patients, coverage of medical group losses, capital expenses and community programs across the local market.

The new initiative is intended to increase medical services in the East End, improve health in the community and strengthen ties between East End residents and Bon Secours.

A new urgent care center in the East End is expected to come out of the initiative. The search for a location is ongoing and a construction timeline hasn’t been established, Lutes told BizSense.

Bon Secours currently operates one urgent care center in the region, which is at 9851 Brook Road in Henrico, according to a Bon Secours spokeswoman.

A cancer screening center at Richmond Community Hospital is also planned. The center would be a consolidation of existing resources scattered around the hospital into a single location, Lutes said prior to the event.

Planned initiatives on the medical services side include the expansion of medical specialties, the re-establishment of obstetrics and gynecology outpatient service and expanded geriatric care in the East End.

Other projects associated with the overall effort include career programming aimed at high school students and community outreach initiatives. Lutes said work on the plan started prior to The New York Times reporting and was developed with input from community members and physicians.

City Councilwoman Cynthia Newbille, who represents the East End, lauded Bon Secours at the event for the completion of the medical office building and its plans for more projects in the area.

“Thank you for your commitment to the East End. Thank you for delivering on your agreement to develop a comprehensive strategy health-and-wellness plan,” Newbille said. “We look forward to continuing to work with you to implement it.”

It took them longer to build the medical building and create the jobs under the agreement that it took the Washington and the City of build a training camp center, go through what 6 QBs, for the team to change it is name and logo, and then abandon its training camp in RVA. At least the finished before the team was sold by Dan and built it new stadium. And this really good article mentions the monies they made off the drug program but fails to mention the profit they made of the taxpayers for their over generous rental of… Read more »

So Mr. Lutes, is Bon Secours continuing its practice of utilizing a huge loophole in the 340B Drug program? Sixteen million is a rather small investment in an area that reeks of drug addiction, lack of housing and killings. At least B.S. lived up to its commitment to build the facility, a little late.