The apartments as they would appear at the corner of Carnation Street and Hioaks Road. (City documents)

A couple hundred more income-based apartments are in the works for a South Richmond enclave that’s seen a jump in development activity of late.

An entity tied to local developer Lynx Ventures has secured a grant agreement with the city for a 218-unit apartment project it’s planning in the Beaufont Oaks area near Chippenham Hospital.

Plans calls for two four-story buildings to rise at 7000 Carnation St., a 5-acre parcel northeast of Carnation’s intersection with Hioaks Road. The site is just east of Chippenham Parkway and north of Midlothian Turnpike.

The project comes less than a year after development got started on Urbana at Hioaks, a 216-unit complex by Indianapolis-based KCG Development that’s filling a 12-acre site at 6850 Atmore Drive, to the south of the Carnation site. 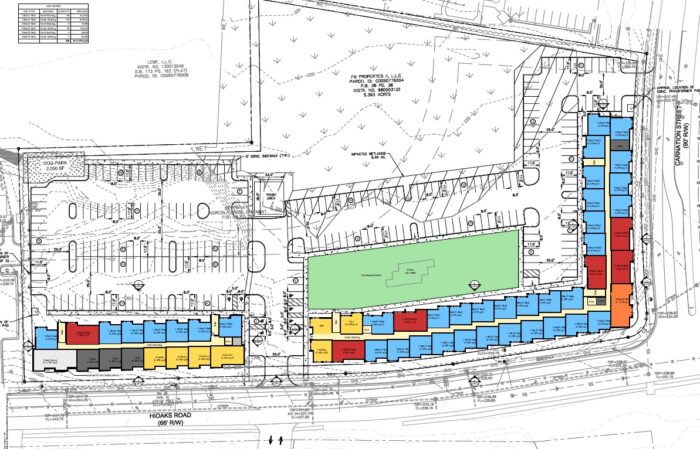 The two apartment buildings would line the street with parking behind them, as shown in this site plan.

Under the agreement, which the City Council approved this week, the LLC would receive funding assistance for the project via a grant from the city’s Economic Development Authority, as allowed by an amendment to state law last year. Grant payments would be funded by incremental real estate tax revenues that the project generates over time, similar to a tax-increment financing district.

To qualify for the payments, Lynx will have to meet development and management benchmarks laid out in the agreement, and units would have to be restricted to households earning 60 percent of the area median income for at least 30 years. Construction is required to commence within 18 months of the agreement’s effective date.

The four-story buildings would house a mix of one-, two- and three-bedroom apartments.

An overall development cost for the project isn’t specified in the agreement. Lynx Ventures’ Bernard Harkless, who is overseeing the project, could not be reached for comment Tuesday.

The apartments are planned to consist primarily of one-bedroom units, with 30 two-bedroom units and 10 three-bedrooms. The two buildings, which would bookmark an entrance off Hioaks Road, would line the road and wrap around the corner along Carnation Street.

The buildings would be positioned close to the street with a 10-foot setback to enhance pedestrian activity. Parking lots for the apartments would be behind the buildings, with one space provided per unit. Planned amenities include a clubhouse, pool and dog park.

Markham Planning represented Lynx in its application for the project, and Walter Parks Architects is designing the apartments.

The area is across Midlothian Turnpike from the Richmond Rosie’s Gaming Emporium, which changed hands in November as part of Churchill Downs Inc.’s acquisition of Colonial Downs and the six Rosie’s sites across Virginia. It’s also across Chippenham Parkway from the Spring Rock Green shopping center, which Chesterfield County is planning to convert to a mixed-use development anchored by an ice hockey facility.

The apartment project adds to Lynx’s workload in the Southside, where it’s also planning, with the Maggie Walker Community Land Trust, a 255-unit, $45 million residential development on the site of the old Oak Grove Elementary School.

Brett has discussed this on a previous project but as someone who currently lives in the area these income based apartments are being built, I’m at a conflict. More housing is great, more affordable housing is even better but the concentration of these projects in Southside where the bus comes every hour means we are still a ways off from getting the treatment of wealthier areas. I was hoping for market rate apartments here in the are to help balance the rates of these much older apartments (1980’s) asking for current market (small renos, added mandated “amenities” security system, trash… Read more »