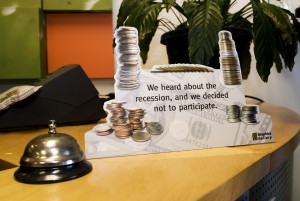 The recession is being felt by business owners everywhere, but at least one Richmond firm decided not to participate.

Graphics Gallery, a West-End based producer of graphic displays, is urging other businesses to join their chorus of recession-deniers.

The company is giving away a series of signs that state: “We heard about the recession, and we decided not to participate”. The motto is flanked by stacks of coins, and in the background a hundred dollar bill.

Steve Samuel, founder and owner of Graphics Gallery, said they have given away more than 300 signs. Most of the signs have been distributed to local businesses.

“I’m a really upbeat guy myself as far as always being enthusiastic and having a positive attitude,” Samuel said, “With all this continuing bad news, you just have to try and step above it.”

The signs also serve as a marketing tool for the company. They feature the Graphics Gallery logo in the lower right hand corner.

“This is to get back in front of my clients,” Samuel said. He said the free signs are a way of thanking them for their business, and also a way to create a dialogue about how his company can help them during these difficult times.

The signs have also increased the company’s exposure, Samuel said. He said he sent the image file to a Hong Kong man who intended to translate the message into Chinese. He said the campaign is also the subject of an upcoming article in a trade publication.

I saw this and thought it might be Mian Street Spa

Hope all is well

We are excited about the opportunities to undersell our competitors with a better product. The people who have “bought in” to the recession are our best targets!

After 40 plus years in construction, we have been around this block a few times – the only way out is to suck it up and get back to work using creative thinking. We will get there from here.

A briliiant piece of marketing and upbeat too! Kudos!

Steve keep up the positive attitude.Together, we can all get out of this.
People helping people….
Taylor