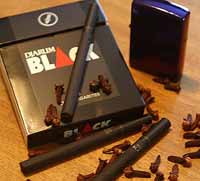 A U.S. Senate panel is considering tobacco legislation today that would ban certain cigarette flavorings including cherry, chocolate and cloves.

In what may be a surprise to some, leading tobacco product producer Altria supports the ban. The company has negotiated with anti-smoking advocates and lawmakers to reach a compromise on the bill.

The ban exempts menthol-flavored cigarettes, which account for 28 percent of all cigarettes sold in the U.S., according to the Specialty Tobacco Council. By comparison clove cigarettes account for just under one percent.

Clove-laced smokes are considered “trainer cigarettes” by the National Institute of Drug Abuse which they say lead to increased tobacco use among teens.

But the export of clove cigarettes is big business in Indonesia, which exports $100 million worth of the product to the U.S. each year. The country is threatening to file a trade complaint with the World Trade Organization if the U.S. passes the ban, according to Bloomberg News.

Passing the law could also jeopardize $22 billion in annual trade with the between Indonesia and the U.S.

The bill also regulates labeling of cigarette packaging and would require manufacturers to include warnings on the front and back of the package that occupy the entire top half of the panel. Among the nine accepted warnings include: “Cigarettes cause cancer”, ”Smoking can kill you”,  and the slightly innocuous  “Quitting smoking now greatly reduces serious risks to your health.”