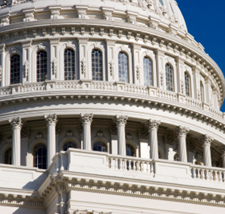 Richmond’s congressional delegation has submitted earmark requests for more than $105 million in federal funding for projects in the metro region for fiscal 2010.

It’s hard to tell exactly how much will be approved, as internal politics on Capitol Hill play a big part in the process.  Last year, all of Virginia received $188 million.

But for the requests that do get approved, that means funding for delayed construction projects, public transportation and workforce training. That, in turn, means jobs for government subcontractors and so on down the chain.

Republican Congressman Eric Cantor, who represents western Henrico, did not file any requests this year, continuing a pledge not to make the budget requests for so-called  “pork barrel spending.”

Representatives from Virginia’s other congressional districts also made a few requests for organizations based in Richmond, as did Sens. Jim Webb and Mark Warner (who jointly filed their budget appropriations). That brings the total 2010 federal funding requested for the Richmond metro area to more than $150 million.

A new policy requires all lawmakers to post their requests online. For better or worse, earmarks are a key part of a representative’s political capital. Federal money that flows into a district trickles down to the constituents and often creates work for local companies. Candidates hope voters remember everything they have done for the district when reelection comes around.

Sometimes the links between campaign contributions and earmarks can be murky, as in the case of Indiana Congressman Pete Visclosky, who is under investigation by the FBI.

But the new transparency rules are intended to prevent that very kind of political back-scratching from taking place.

BizSense looked at the current earmarks from representatives whose district includes parts of the Richmond region, as well as those made in the Senate. Below are the highlights.

“Every year that GRTC puts in an annual appropriation to the House and Senate and Congressman Scott has always been very supportive,” Clary said.

“We are very appreciative of that.”

Clary said those requests are on top of the $11.8 million the GRTC received from the stimulus package.

Scott’s request for Bon Secours includes $550,000 for the nonprofit health system’s domestic violence program and $1 million to replace cooling units at three of its area hospitals. (You can read about the business of Richmond’s nonprofit hospitals here. )

The city of Richmond could get a total of $3.4 million for a variety of purposes at the request of Scott, including Franklin Military Academy enhancements, wastewater treatment and prisoner rehabilitation. Nearly $1.4 million would go to economic development programs, including funding for a Neighborhoods in Bloom program to rebuild and upgrade two blocks of Catherine Street in Carver. The investment will generate 42 jobs and increase the number of residential units from eight to 30, according to the project description on Scott’s website.

Scott requested $10 million for Henrico County to build a New Market Heights Memorial and Visitors Center at the Richmond National Battlefield Park. The site is significant because 14 African American soldiers received Congressional Medals of Honor for their role in the battle.

Scott also requested $800,000 for a nurse aide training program at J. Sargeant Reynolds Community College, $1 million for a lab expansion at the Massey Cancer Center at Virginia Commonwealth University and $1 million for Virginia Union University to renovate the Belgian Building.

Randy Forbes, who represents Petersburg, Prince George and Chesterfield, requested $71.7 million for programs and projects within the region.

Almost $28 million of that is for construction related to the Fort Lee expansion.

Forbes requested $20 million for a new interchange off of 295 at Meadowville Road in Chesterfield. (Webb and Warner also requested $4 million for this project. According to the project description on Forbes’ website, the area around Route 10 is growing as a large industrial hub and the interchange will improve freight access in and out of the area.)

Another $10 million was requested by Forbes to widen Route 10 between Route 1 and Ware Bottom Springs Road in Chesterfield.

Other request by Forbes were for various historical conservation projects, expanded programs at Virginia State University, and security and technology enhancements for local governments.

Sens. Webb and Warner filed their request together, which included more than $28 million for the Richmond area. Among their earmarks are $5 million for construction upgrades at Richmond’s wastewater treatment plant, $2.34 million for a deep water turning basin on the James River, $3.4 million for increased security at National Guard facilities in Sandston and $600,000 for GIS training for displaced workers through the Virginia Community College System.

All of Virginia’s representatives filed some sort of appropriation request for the coming year, except for Eric Cantor.

Cantor’s press office did not return BizSense’s request for comment on his policy, but he expressed his views on earmarks in an interview with the Culpepper Star-Exponent last year.

At the time, Cantor and other congressional members called for an earmark moratorium. In the interview, he said that not all earmarks are bad but that the system is broken and needs attention.

Cantor hasn’t always had a “no” stance when it comes to earmarks. Appropriation requests made before making his pledge include $2.5 million for the Massey Cancer Center at VCU, $8.6 million for road improvements at Richmond International Airport, $750,000 for beautification at VUU, $2 million for the American Civil War Center and $723,500 for the sewer system in Atlee Station.

For those legislators that did submit earmarks, approval of the 2010 budget appropriations are scheduled to be wrapped up before Congress’s recess in August.