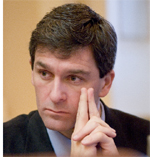 In about two months, Virginia voters will return to the polls to vote for governor, lieutenant governor and attorney general.

Over the next several weeks, BizSense will present interviews with the candidates that will focus on their approach to business issues in the commonwealth.

First up is the Republican candidate for attorney general, Ken Cuccinelli.

Cuccinelli has been a state senator representing the Fairfax district since 2002. Born in Edison, N.J., Cuccinelli, 41, holds a mechanical engineering degree from the University of Virginia, a law degree from George Mason University and a master’s degree in international commerce and policy, also from GMU.

Cuccinelli’s approach to policy is to limit government as much as possible. The attorney general’s job includes enforcing the law of the land, but Cuccinelli adds that it is also about eliminating unneeded and overly burdensome regulation.

BizSense talked with Cuccinelli about what impact the attorney general’s office has on doing business in Virginia, as well as his take on issues from card check to stimulus money.

Richmond BizSense: Your campaign site mentions you are a small-business owner. Tell us a little bit about that.

Ken Cuccinelli: I started my own law firm six years ago. Over time, it morphed, and there are more attorneys and supporting professionals. I am a litigator and I do business counseling for small- and medium-sized businesses. I’ve lived through some of the challenges and dealt with those of others.

I have a keen sense of what government imposing a small burden on business can do. That overhead costs you money and takes away from the bottom line without adding to the value.

RBS: What do you see as the biggest issues for small-business owners, and how would you address them as attorney general?

Cuccinelli: There are some looming threats. One is card check. The attorney general is the last line of defense for our right-to-work law. If the federal government tries to undercut our right-to-work law, the attorney general will be the person to have a chance to protect us. That would happen under the 10th amendment, [which] means protecting our right to govern our business environment in a way that is appropriate for the state. Part of that means the federal government doesn’t have the right to tell us to get rid of right-to-work.

RBS: What about the domestic front? What are some things the attorney general can do to improve Virginia’s business environment?

Cuccinelli: The biggest thing is to reduce regulations. Bob McDonnell started this as attorney general. He started a program to review and eliminate duplicative regulations, regulations where the cost isn’t worth the benefit. I’d like to add to that a review of legislation. In the legislature, we bring these bills in and think each one is the greatest thing since sliced bread. Shocking enough, they all haven’t worked out. In the legislative offices they don’t have the staff or resources to review how new proposed laws have worked out for Virginia and what the cost and benefits have been. I’ll use the lawyers in the attorney general’s office to look back through some of these statutes to unburden citizens from rules that have been laid upon them. They may have made sense at some point, but nobody has taken the task of seeing what shouldn’t still apply.

RBS: The Virginia Information Technology Agency has run into issues with its private contractor Northrup Grumman. Was something wrong with the contract? What can the state do differently to improve the effectiveness of its contractors? Should future contracts be subject to greater scrutiny?

Cuccinelli: There are plenty of lessons to be learned for future contracting. I think hands were tied a bit too much and it restrained out ability to gain advantage out of the contract. I think the governing structure has proven itself to be a failure, and that needs to be redone.

RBS: Virginia is awash in stimulus money, but much of it has strings attached. As attorney general, how would you review the stimulus funds and projects to make sure we are getting the most out of it?

Cuccinelli: First of all, whenever you get these influxes of money, you’ve got to have your eyes out for fraud, and that comes under the jurisdiction of the attorney general. I’d certainly be interested in prosecuting something that popped up. Also I want to make sure as that money comes into Virginia [that] it gets spent and it isn’t done in a way that forces us to give up the policies that have made Virginia a quality place to do business, to live and raise a family. We would keep our eyes on the fine print, whereas the governor and legislature would be looking to spend. We make sure it is consistent with all of Virginia law and policy on the books.

RBS: You have called for tort reform by reigning in excessive litigation. How do you plan to achieve this? What specific areas are of the greatest concern to businesses?

Cuccinelli: It is hard to derail a case, whatever the quality of the case, prior to trial. I’ve been a supporter of reforming summary judgment in Virginia state cases by allowing the use of depositions, so that judges can determine if there are facts in dispute, and if so, if a case doesn’t have merit, to kick it aside, and on the other hand, if it is a slam dunk, to put it into awarding damages immediately.

I want to give folks their day in court, but I want to have as efficient of a court system as we can.

Check back next week for our interview with Democratic gubernatorial candidate Creigh Deeds.

Oh Boy, another government hater, regulation hating Republican who wants to work for the government and is willing to spend a million bucks to get the job. I sincerely hope this tired routine has run its course. Wise up Virginia. We cannot afford guys like this…please don’t forget George Bush, George Allen, and Jim Gilmore. All government haters who drove us off of a financial cliff!

Lack of regulation and enforcement has worked so well over the last decade. A financial system meltdown and taxpayer’s looted. People poisoned with Mercury and Arsnice. Scores of dead miners. Workers abused while executives loot thier companies. Another idealogue. Not what VA or our country needs. Perhaps we should stop electing people to government who believe that government doesn’t work. Becuase sure enough, once we elect them, it doesn’t. Here is a thought: Let’s elect someone who doesn’t think that we should throw everyone in jail and let the taxpayer foot the bill. Let’s elect someone who will act as… Read more »

Your comments seem to be contradictory. Government took us to the financial cliff by spending more than they take in. By shrinking government spending, we can pull back from that cliff. That means reducing the size of government. You will need to explain to me how growing government will help us financially. It isn’t working for California.

BTW: George Bush was never a Virginia Politician and it was his growing government through war and drug programs that helped get us to the cliff.