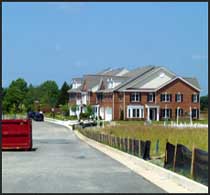 Banks are taking back almost 100 building lots and partially built houses belonging to Prospect Homes, a local builder that filed for Chapter 11 bankruptcy protection in June.

The builder has not been paying interest on those loans, according to financial statements that must be filed with the bankruptcy court.

Most of the properties, which are located in suburban areas of the Richmond area, are worth about half as much as banks are owed, according to assessments in the bankruptcy court filing . Even in bankruptcy protection, the company is supposed to pay a host of banks a total of about $45,000 per month.  Prospect has not paid since at least August.

The bankruptcy court is now letting the banks foreclose on the properties.

“In situations where we are trying to collect on debt, we use any way possible to maximize our recoveries,” said Jay Devoe, a vice president of lending for Regions Bank, which is trying to recover almost $5 million it lent Prospect.

Devoe said banks typically have several options to get their money back, including selling the note for the loan or foreclosing on a property and then hiring a Realtor to list the property. Sometimes buyers seek out the bank directly, he said, and that can mean the property gets sold without ever really hitting the market.

“Realistically, any of those options are still available,” Devoe said.

Wachovia Bank is taking back 35 properties, which include unimproved lots and completed houses. As of June, the bank was owed $4.9 million; $3.5 million of that was secured. The debt is greater than the approximate value of the properties by $1.23 million.  Wachovia did not return calls seeking comment.

At the time of the initial filing, Franklin Federal was owed $2.1 million, $1.4 million of which was secured.

And Regions Bank is owed $4.9 million, $2.5 million of which was secured. The 57 houses and/or lots it is taking back are assessed at $1.8 million less than it’s owed.

The biggest block of lots is at the Lakeridge Green development in Hanover County. The lots have an approximate value of $37,000 and a principal debt of $65,000 each. There are also properties at Greenbrier Woods in Chesterfield and also in Louisa.

Nine lots are in the Avington section on Pouncey Tract Road, near Short Pump.

Prospect is also not paying unsecured creditors, who are owed hundreds of thousands of dollars each for work performed, according to financial statements filed with the bankruptcy court.

The business is still not breaking even. In October, the company brought in revenue of $839,000 and for the three months of August, September and October brought in $2.4 million. The company had a loss of $817,369 for that three-month period, with the biggest lost being $336,738 in October.

At the end of October, Prospect had total liabilities of $46.8 million and total assets of $28.3 million.

The developments with foreclosed property are:

The banks need to start writing down all Real estate loans on both homeowners and builders/developers. These asset prices were a bubble! Many of the bond holders on the securitized stuff have already written down the losses, anyway. The only way we are going to get out of this mess, is if the banks cut their losses and move on. Write it down, sell it quick, for whatever it’s worth and move on, so that the market can work out the excess slack. The shadow inventory out there is going to kill this recovery.The asset prices were inflated, everyone knows… Read more »

Carter, you’re absolutely right. My thought goes to foreclosures that are coming. Some economists are predicting record foreclosures for 2010. That will simply stymie any housing recovery seen now, thoughwe haven’t seen it in Richmond yet. The banks were given $700 billion to make things right. Time to make things right. Get rid of the bad debt the best you can and let’s get on with rebuilding our economy.

I am a G.C. specializing in historic restorations in the Richmond area. I have seen several contracting companies fold or weaken their market presence due to over extending their capital resources and not being able to secure financing due to the banks, in general, being gun shy of contracting. Who can blame them? But the problem still exisits as to how do your liquidate toxic assets (hate that term toxic asset) in such a weak market. Realistic numbers are now surfacing in the housing market and it’s about time. I told several realtor friends a few years ago, to enjoy… Read more »

Lowell, I agree with you about the past greed of the sellers, but we still have greed. It’s now the buyers who are greedy. And behind every “good deal” is a sad story.

I feel bad for the builders who got caught in the decline. I know a few builders here in Williamsburg who are “surviving” but none who are thriving. We’ve been in this slump now for more than 3 years. That’s a long time to “hang on”.

For investors out there, some of these lots should prove to be terrific investments!
Susan Krancer
REALTOR
Liz Moore & Associates