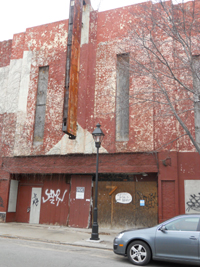 The place was once frequented by the likes of Humphrey Bogart, John Wayne and Bette Davis. But that was so long ago.

In fact, a movie star hasn’t been on the screen there since 1970. That was the year the 850-seat East End Theater shut its doors, ending a run of 32 years.

The Art Deco building at 418 N. 25th St. has been steadily eroding ever since. The building’s exterior and marquee are rusting over. Vines grow up the walls. The roof is gone.

But a ray of light is shining through the rubble. Sterling Bilder Developers purchased the property Jan. 7 for $45,000. The company recently developed the Sterling Row Condominiums in Shockoe Bottom.

There are basically three renovation scenarios on the table that would result in reopening as a theater, like the Byrd in Carytown, creating a community space with a theater on the first floor and galleries and studios on the second, or making it mixed-use, possibly with a restaurant and theater.

“The building has a lot of problems,” Bilder said. “One of the main problems is the roof. The first thing we need to do is get a roof on and stabilize the building.”

Bilder said the company has hired Watershed Architects to come up with a design for the roof, which he says the company plans to put on this year.

The finished renovation project, whichever way it goes, will be at least two or three years out, Bilder said.

“That’s a large number but there’s some incentives at the city and state levels, like grants and tax credits,” he said.

“The city has been trying to upgrade 25th Street, and this building is kind of a linchpin for redevelopment,” Bilder said.

Bilder said that he came here from New York about 10 years ago and that this is one of the properties Sterling Bilder identified years ago as a potential development site.

The property was tied up in family trusts for some time and was unavailable until recently, he said.

He agrees that the theater property is critical to upgrading the 25th Street corridor.

“The uses he’s proposing are appropriate,” Herring said. “I do not see a preservation fight for the theater at all.”

The East End would join other recent theater renovations if the project happens. The Robinson Theater Community Arts Center at 2903 Q St. in north Church Hill was redone and had a grand opening a year ago. The Hippodrome Theater on 2nd Street in Jackson Ward is slated for a $12 million restoration with a scheduled opening as a music club in April 2011.

Bilder was asked if his company would turn over the management of a movie theater or restaurant to someone else.

“I’ll be involved in management of this building. I’m going to manage the building,” Bilder said. “I’m committed to this project.”

This sounds great! I wish them the best of luck!

Josh: I’m glad to see you starting on this! That’s a great building that deserves a new purpose. I’ll be pulling for your plan’s success.

As a native Richmonder, I’m always thrilled when I hear of someone making an effort to save the history of the city. Best wishes on a successful project!

I inspected this property last year when it was proposed for redevelopment as a huge residence (with a green roof) and retail store (wine shop). It’s barely a building, and I was impressed with the owner’s (at the time) vision. Sterling Row is gorgeous so I have high hopes for this property under new ownership.

i am excited..however.. i can only imagine where the parking is coming from..being that the city will require non off-street parking. Everyone remember the parking issues that crippled the Que Pasa restaurant?