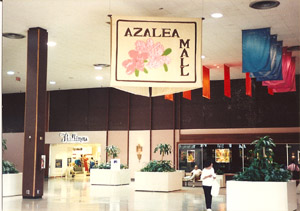 Growing up in Mechanicsville, the closest mall when I was growing up was Northside’s Azalea Mall.

The mall built in 1962, was torn down in 1999. All that remains is a vacant lot, overgrown with weeds and littered with drifting trash. It was one of the first modern enclosed malls in the area, and much like Cloverleaf, it was abandoned for newer, glitzier shopping centers deeper in the suburbs.

NBC 12 online reporter Phil Riggan has a great article and slideshow on the current status of the property, which is owned by Atlanta-based Dewberry Capital Corporation. The owner intended to rebuild a 420,000 square foot shopping center on the site in 2000, but clearly that never happened.

Here is an excerpt from the article:

Mike McLaughlin and his family have run the Azalea Mall Garden Center on the property for 16 years. Before that, he had been a manager at the Woolworth’s until the mall closed.

McLaughlin leases his tiny corner and as the longest-running tenant, he looks after the Azalea Mall property for Dewberry and Westminster Canterbury.

“We stop a lot of dumping and people dropping things off – like abandoning vehicles, trailers,” he said.

He said customers ask him about the Azalea Mall every day.

“We spent 16 years building the business and growing up with the neighborhood,” he said, adding that he has watched customer’s kids grow up, and even learn to drive in the vacant parking lot.

Dewberry still has intent to develop the site, but is not in a rush to do so, according to the article. In the mean time it remains an urban wasteland, however many in the neighborhood said they were content to see it stay that way because they are concerned about traffic in the area.

And check out this link for more on the old Azalea Mall.