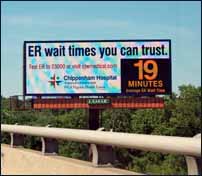 Richmond’s hospitals might remember this summer as the Billboard War of 2010.

Near the Staples Mill exit on Interstate 64, three billboards from competing hospitals are within yards of one another. One announces the recent merger of VCU Medical Center and Children’s Hospital. Another directs drivers to search for a doctor on Bon Secours’ website. (We hope it’s not so convincing that drivers browse the Internet while driving.)

And perhaps the most noticeable at 60 mph: A digital counter that shows how long you’ll wait if you have to go to the emergency room at Henrico Doctor’s Hospital.

“We know that right now the research shows that health care is one of the key areas consumers are interested in,” said Karen Nelson, executive director of marketing at HDH, explaining the fresh marketing strategy.

“People are reaching a point where they are self-educating and wanting a choice. You have to provide the information back so you can compete effectively for that mindshare and that customer,” Nelson said.

It’s part of a campaign launched by the HCA, which owns Henrico’s Doctor’s Hospital. HCA also has the digital ER-wait counter on billboards for the Chippenham Hospital and for Parham Doctors’ Hospital near Parham Road.

The campaign started at an HCA hospital in Florida that used electronic documentation systems at the emergency room to feed data to a system that allows people to check ER wait times online and via text message.

Sheldon Maguire, HDH’s emergency services administrator, said the emergency department has been working for a year and half to get operations in line with the HCA standards to make its wait times public.

The wait times are based on four-hour averages and are updated every 30 minutes. Those figures then go out on the Internet, via text messages and to the billboards.

“We really started to peel back all the layers that had been put in place to say, ‘How can we get that patient to the provider within minutes of them coming into the door?’” Maguire said.

The wait times that appear to the public, Maguire said, “fluctuate from 14 minutes to sometimes more than we want.”

HDH’s internal marketing team launched the campaign in May, Nelson said. The billboards began popping in the past eight weeks.

“The web traffic we’ve had and text traffic have escalated through the roof,” Nelson said, since the campaign launched. HDH received more than 3,000 text message inquires in the first three weeks of the campaign, and its website saw a 61 percent increase in visits.

“It helps the community to be better aware of the services we are offering,” Maguire said, “in a very publicly visible way.”

The public nature of ER wait times also has HCA’s own hospital competing.

“Sister hospitals compete with each other on their times,” Maguire said.

Interesting use of technology, though I’m not sure the information is in the most useful place- “Hey, only a ten minute wait, I think I’ll swing by the emergency room!” I suppose it could be used to drive awareness, but I think proximity may be the driving factor when you want an ER.

They are promoting the most expensive health care. People that can read/ponder the wait times need to go to their GP or Patient First.

I own a healthcare marketing firm, and I love this approach. Everyone hates waiting at hospitals emergency rooms – pushing out this message to the public allows them to see how long a wait is, and I am sure keeps the hospital more cognizant of wait times – thus improving service. Great article, thanks.

As with most advertising, it’s what they don’t tell you that really matters. While it’s true that Henrico Hospital will get you in quickly to “see a provider”, it’s the wait “behind the curtain” that is interminable. From personal experience, I can say we were escorted almost immediately to the treatment area, but ended up waiting hours to be treated and released. Most of that time was just waiting and waiting and waiting in a small room — until yet another “provider” after “another provider” came in to see us. Need an x-ray? Ok, well wait here (one hour). Need… Read more »

I’ve thought these billboards were a gimmick from the beginning. Like Kieth said above, you’re probably going to the closest hospital no matter what the waiting time is. If you have an actual emergency you’ll be seen immediately no matter where you go. It’s the people who go to the ER because they threw up or had a fever that have to wait, and they should for making such a ridiculous decision in the first place. If people only went to the ER for emergencies, wait times would have never become an issue in the first place. Stewart I think… Read more »

With all the buyouts and big money spend on healthcare advertising by big brands, the local private practices are struggling because they cannot afford to compete. They need to band together.

Disclosure: I’m a partner in the Recover NOW marketing program for doctors – where banding together to improve the first interaction between patients and physicians really matters.