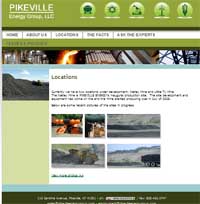 It didn’t take a local ophthalmologist long to start second-guessing his $800,000 investment in a fledgling Appalachian coal mining operation.

The story begins in August 2008, when Askshay Dave received an email from Gary “Bud” Richard, a local social acquaintance, offering a “once in a lifetime opportunity.”

Three days later, Dave, who has a practice off Bremo Road, cut a check to Pikeville Energy Group for $800,000, according to a civil suit filed recently in Richmond Circuit Court.

Dave appeared to have gotten the willies barely a month later and asked for his money back.

That began a process that after two years has culminated in a lawsuit against Richard, Pikeville and another entity, claiming several counts of fraud, breach of contract, violations of the Virginia Securities Act and that Richard allegedly used the money for his personal benefit.

That enticing email (which you can read here), which was included in the suit, began with Richard saying he was only sending the message out to a limited number of “higher net worth contacts that might be interested in what I truly feel is a once in a lifetime opportunity and will yield returns of 30 percent to 43 percent annually.”

Richard also asked that the contents of the email be kept highly confidential “as I really do not want word getting out in Richmond, nor do I want to offend anyone that I did not include in this opportunity.”

He explained his involvement in a startup coal mining operation with a company out of Kentucky called Pikeville Energy Group,    which needed investors immediately because it couldn’t obtain conventional financing.

The email included an investor presentation complete with income projections, photos of coal mining sites and mining equipment.   Pikeville was formed, according to the investor presentation Dave received in the email, to secure property, mineral rights and equipment related to coal mining. Pikeville would also eliminate risk by contracting with outside parties to do the actual mining.

Pikeville would then buy the coal mined by its contractor, Blackberry Energy LLC, for $64 per ton. The investor slide show said Pikeville could then sell the coal for around $127 per ton. Richard even showed he was personally vested in the venture and said he had been using cash from his other company, Massachusetts-based Banner Industries, to fund Pikeville’s operations.

“I am in this for more dollars than I’d care to mention right now, but we are turning the corner and all is going extremely well,” Richard said in the email.   Then came the urgent call to action. Richard needed investment money within one week.

Dave complied with the request, the suit claims.

On Aug. 29, 2008, Dave agreed to loan Pikeville $800,000 in exchange for a 2 percent interest in the company. The loan was to pay 24 percent interest that would come from royalties of $1.50 per ton of coal produced by the operations. In all, Dave was to receive a total payback of $2 million within three years.

Sounds like a pretty good deal, except that, according to the suit, Pikeville and the entity it supposedly had a contract with to mine the coal has ceased all coal mining operations by January 2009 – just five months after Dave cut the check.

A call Monday to Pikeville found that the company’s number has been disconnected. Pikeville was also dissolved by the Kentucky Secretary of State for failing to maintain a registered agent.

A message left at Richard’s office in Massachusetts was not returned. The voicemail on his cell phone was full. There was no response to an email sent to his personal address.

The suit also says that the profit margin Richard and Pikeville claimed in the investor presentation was nowhere near what they would actually bring in.

By December 2008, having not received a single payment, Dave wanted to know where his money had gone. The suit says he eventually was told that Richard put the $800,000 into Banner Industries, leading Dave to believe it was being used for Richard’s personal benefit. By that point Dave had sent a notice of default and wanted the entire $800,000 plus interest paid back immediately.

In June 2009, Richard said under oath that Pikeville was in default and had no ability to make payments on the loan.

Dave’s attorney, David Spiro of Hirschler Fleischer, would not comment without permission from his client to do so.

“The facts [in the suit] speak for themselves,” Spiro said.

Serves him right for investing in coal mining.

If it sounds too good to be true, it usually is. Why is it that Doctors are such bad investors?

You know, anonymous, the power for your computer you used to respond to this article came from coal, probably from KY. I don’t think a windmill would have cut it!

This is why entrepreneurs have difficulty funding for legitimate projects.

Whatever happened to due diligence?

Does anybody know who Gary ” Bud” Richard is? Was he aquainted with the Dr. previous to sending the e-mail or did the Dr. just fall for a scam that showed up in his in box?

If an email is all it took to separate the Dr. from his $800,000 perhaps he didn’t deserve it to begin with.

Is this another situation where the aggrieved person pleads their story to this site looking to expose some injustice, and it backfires on them? Just asking….

I have heard the Dave’s lasik surgery ads on the radio and constantly see him and his wife drinking heavily around Richmond. They might want to sober up before handing out $800K checks!

Before automatically assuming that the doctor was a fool, it makes sense to wait and see how the judge sees this. Slick presentations and duplicity have fooled sophisticated investment bankers(Worldcom, Enron, ad nauseum…). Does Richard have any other dealings locally? How have they fared?

Didn’t the entire market get fooled by most investments/stocks and particularly energy related investments in 2008? The question is how many of these investments failed due to wrongdoing versus the 2008 market conditions. Anyone remember a little thing called a global recession? Dave and Richard’s coal company probably put them in an enviable position as of August of 2008. By November of 2008 my personal portfolio was trashed. And yes that potfolio included coal investments that were sound choices as of mid 2008. I am just glad that my investment in coal was far less than the doctor.