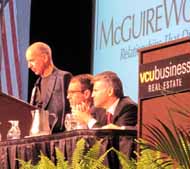 Almost 1,000 real estate professionals from the Richmond region gathered Tuesday to hear the latest prognosis on their industry at the annual VCU Real Estate Trends Conference.

Among the speakers was a panel of commercial real estate insiders who discussed the state of financing for commercial deals ranging from $2 million to $20 million. The four panelists, representative of firms currently active in the marketplace, suggested that the worst is behind us and that the commercial market is ripe with opportunities.

The mood has improved markedly from last year’s conference, said panel moderator John B. Levy of the Richmond-based investment bank of the same name. [private]

“Last year, we were in the middle of a depression. Maybe more like an oppression,” Levy said. “For most of us, things may be better, but probably not great.”

That could also describe the state of the mid-size investment market, which according to panelists is showing signs of stabilization. But for Richmond it might take some time before lots of deals start coming out of the ground.

“Liquidity comes out of a market like Richmond quicker, and it takes longer to come back,” said John Maher, executive vice president of the Commercial Real Estate Group at Hartford Investment Management Co. Maher said his firm is very bullish on acquiring assets in this market in the $10 million to $50 million range.

One segment that is currently most active in the Richmond market is multifamily, which Mike McRoberts, a sales and production head for Freddie Mac’s multifamily division, said is leading the way in terms of new construction projects. He said that most of the new apartment construction he is seeing on land acquired by developers several years ago who delayed their plans because of the economy. The timing is finally right for some of those developers to get those projects started even though the returns might not be as high, he said.

The panelists also addressed the issue of commercial mortgage backed securities, which were a financing mechanism supported by investors who bought bundles of commercial mortgages. The CMBS market has essentially disappeared in the wake of the financial collapse. But Bruce Cohen, chairman and CEO of Chicago-based Wrightwood Capital, said it will make a comeback.

“There is no question CMBS will be back,” Cohen said.

“If it doesn’t restart, we have a real issue,” he added, referring to the millions of dollars worth of short-term CMBS loans coming due over the next few years. But he compared fears that overhanging debt will spark a crisis in commercial real estate to those that the Y2K bug would wreak havoc on the country’s computer systems.

The Richmond market has seen a few instances where foreclosed CMBS properties have been snatched up at steep discounts, including the Circuit City headquarters. That building was bought for $3 million. There was a $17 million CMBS loan on the same property that the previous owner defaulted on.  As of spring, 6.5 percent of the total $2.7 billion in CMBS debt in the Richmond region was in default, according to Trepp.

Maher, from Hartford Investment, agreed that CMBS will return — with one important aspect restored.

Mr. Cohen’s statement is quite misleading. Most lenders have written down losses, but the write-downs aren’t even close to realistic market values. Take the Circuit City property as an example. Obviously the size of the property in this market was an exception, but the fact that it was sold for 82% less than the original loan should be telling. Most of these lenders are just now coming around to writing down these properties 5-10% a full 2 years after the market collapsed when a more realistic estimate would be in the 25-30% range. They simply don’t have the real capital… Read more »

This is one of many points mentioned on Tuesday at the VCU RE Conference.

For a more detailed summary with actual quotes, go to the link below. There are 3 (very short) articles on the VCU RE conference.