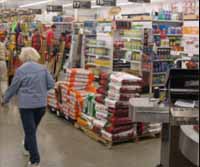 Richmond consumers continue to cut their overall spending, but a few retail segments are starting to see their sales numbers rebound including clothing and hardware stores.

For the second quarter, area sales totaled $2.59 billion compared to $2.64 billion in the second quarter of 2009.  The decrease of 1.89 percent is the smallest quarter to quarter change since BizSense began analyzing taxable sales data at the end of 2008—a sign that the slowdown may be flattening out.

Consumers pulled back at a faster pace in previous quarters — 4 percent and nearly 8 percent for many of the reports BizSense produced.

Also encouraging, several retail sectors that were hit hard during the recession seem to be rebounding.

For instance stores that sell clothing and clothing accessories appear to be doing much better. Sales increased through the first half of the year 3.7 percent over the previous period a year ago for a total $281 million. Comparing the second quarter of 2010 to the same quarter in 2009, sales improved more than 8.5 percent. That is a drastic turn around from the same comparison from 2008 to 2009, when clothing retail sales fell 11 percent.

Sales exploded by 43 percent in the second quarter compared to the previous year. That is a lot more ringing registers than between 2008 and 2009, when sales dropped of by 14.5 percent.

Restaurants and bars are also doing a little bit better, growing sales by more than 6 percent in the second quarter. That is a big change from the 1 percent to 2 percent decrease reported for previous quarters.

In another twist, the retail segments that have performed the best over the last two years look to have hit a wall.

General merchandise stores, such as Wal-Mart and Target, are also not as generating as much sales as usual. Making up the largest segment with $405 million in sales in the second quarter, only grew by 1.5 percent. That is less than previous quarters when they grew by as much as 6 percent.

We are seeing the same trend in retail real estate, as indicated in the Thalhimer retail quarterly report. Just as we saw negativity snowball when the recession hit, I look forward to seeing these positive trends do the same. Our National Retailers and Local Merchants who employee so many deserve it.

I’m happy for the store owners who desperately need this but since employment and hours worked per week are still in the ditch I wonder what the explanation is? I guess once you find out your mortgage lender doesn’t own the note to your house you have $3,000 a month extra to spend at the mall.