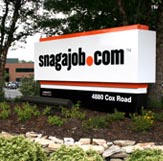 Snagajob might be moving across the pond to accommodate lots of new workers.

No, not to England, but to 4851 Lakebrooke Dr., on the other side of the lake from its current location on Cox Road in Innsbrook.

Several real estate sources familiar with the deal said the job-hunting website is in negotiations to lease the 70,000-square-foot office building previously occupied by Bostwick Laboratories. The building also happens to be adjacent to the Snagajob.com Innsbrook Pavilion, a concert venue sponsored by the company.

That office is almost twice the size of their current facility, which is 35,000 square feet. The dot-com has two years left on its lease, sources said. 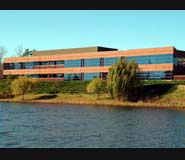 This week the company announced it had received $27 million in private equity funding from California-based venture capital firm August Capital. (You can read more about that in a Times-Dispatch story here.) The company said in a news release that it planned to use the investment to “expand its product portfolio, intensify marketing efforts and increase the size of its sales team.”

In its release, the company said it planned to grow its workforce of 210 employees to about 300 by the end of this year.

Shawn Boyer, founder and CEO, declined to be interviewed by BizSense. Boyer told the Richmond Times-Dispatch that the company is planning to move into a larger space within the Innsbrook Corporate Center.

The Lakebrooke Drive property is known as the Rhodia Building and also as Lake Brook Commons. The leasing agent for Highwoods did not return a call seeking comment.