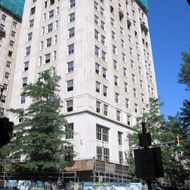 After four years, Hugh Campbell is finally moving back to his old digs.

Campbell will reopen the John Marshall Barbershop inside the building for which it’s named. Other tenants are also poised to move into the historic hotel, which is being transformed into hundreds of apartments and 23,000 square feet of retail space.

Campbell’s barbershop started out inside the hotel, but four years ago he had to move it into a temporary space across the street while the developer at the time tried to get a rehab started.

Campbell, who has been running the shop since 1982, said revenue fell 30 percent with the move.

Campbell is one of a handful of downtown merchants looking to get into the spiffed-up building, which is undergoing a $70 million renovation.

But although a few tenants have announced their plans to move into the building, that part of town has been slow to land new residents and businesses. At the nearby Miller and Rhoads building, which was a historic renovation of a department store, all the retail bays remain empty. Condo sales have also been slower than developers anticipated.

Still, Campbell said he’s just starting to see a surge in business again and he expects it to pick up even more once he gets back in his old space.

“Having all the to-be-condos and other retailers, I’m feeling very good about the future of the John Marshall Barbershop,” he said.

Campbell said that the buildout for his eight-chair shop is underway and that he plans to open Nov. 17.

Suzanne Wolstenholme, owner of Colony Club Catering, was the first to get a space inside the former hotel. She leased about 15,000 square feet of space in the lobby and two ballrooms for her catering company to hold wedding and corporate functions. Her current location is a few blocks west on Franklin Street.

“I’d been hoping and praying for a ballroom to host our own events,” Wolstenholme said, adding that she used to do catering work for clients who held events at the hotel – that is, before it closed. 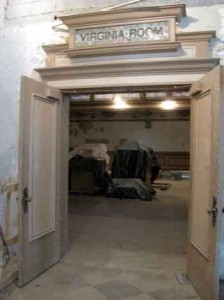 Wolstenholme said she has already booked 30 events for the John Marshall ballrooms. Her first wedding will be in October. She said the two ballrooms will allow her to do bigger weddings and events.

“Here we can only have up to 225 people,” she said, referring to the Colony Club, where the business operates. She said her biggest wedding to date is about 350 people. The Virginia Room can hold up to 600.

“There are not that many places in town where you can have that many guests,” she said.

Most of the bookings have been split between the two ballrooms. The Virginia Room, which is bigger, costs $4,500 to book, and the Marshall Room costs $2,700.

She said besides weddings, boxed lunches are a big part of the company’s business, which she plans to continue at the John Marshall.

Her lease is up on the Colony Club in October and she said the name of the company will change to John Marshall Catering when she moves in. She plans to bring up to 150 employees to her staff of 25 to help with the weddings.

The developers of the John Marshall said that there will be four to eight tenants in the building when it opens in the fall.

“We have spaces as small as 1,000 up to 7,100 square feet,” said Michael Campbell, a principal at Dominion Realty Partners. “We’re hoping to announce more [tenants] in the coming months.”

He said that a couple of local restaurants have shown interest in leasing space, but they haven’t locked anything down.

Campbell said that the martini bar that was once in the lobby won’t be returning but that he’s working on having something similar once it opens.

This is a wonderful thing for the City. I hope it all works for the best for Dominion Realty.

Now close down Grace Street so we can have a pedestrian mall like Charlottesville. You do that and I guarantee all that empty space on Grace and at other nearby buildings will fill up in less than five years.

I second the closing of grace for a pedestrian mall. It would be amazing.

I’m going to miss the JM martini bar–it was one of my favorite places in the city. I’m so glad to see the hotel back up and running! I only wish it had done so before I moved away.