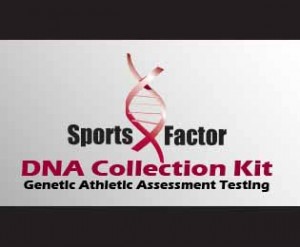 A Richmond laboratory is marketing a genetic test that can help athletes determine what sports they’re naturally suited for and which ones could lead to injuries.

Let’s say your 12-year-old son, we’ll call him Johnny, loves playing football. He’s dead-set on being a wide receiver, but he’s the smallest and slowest kid on the team. He can’t even catch a cold.

You pay potentially thousands of dollars over the years for him to keep playing, even though it’s obvious to everyone but Johnny that he’s no Jerry Rice.

Now, what if a $200 test could have told you that Johnny was genetically predisposed to fail at that sport or that position but that he had the body type for other sports? Would you have pushed him elsewhere? Competitive ping-pong, perhaps?

Richmond-based American International Biotechnology Services, better known as AIBioTech, this year launched its Sports X Factor, a $200 consumer testing product that can assess an individual’s genetic makeup to determine what sorts of activities match the type of muscle fiber they possess and what activities could be a risk for injury.

So if you’re a 33-year-old working stiff who still likes to play pick-up basketball despite having had three knee surgeries, such a test might have been able to warn you years ago that your muscles just weren’t built for setting textbook back-door screens on the hardwood.

Bill Miller, AIBiotech’s CEO, said the business upside for the product is unlimited.

Headquartered off Midlothian Turnpike and owned by Innsbrook-based Bostwick Laboratories, AIBioTech and its 75 employees make the company’s bread and butter with government contracts. But this new product line has them excited about the future.

BizSense recently caught up with Miller to learn about the origins of Sports X Factor, how the company addresses critics of such testing and what the FDA thinks about direct-to-consumer genetic tests.

The following is an edited transcript of that conversation.

Richmond BizSense: This product seems like something out of science fiction. Where did the idea come from?

Bill Miller: We looked at two components. First, there was the need for athletes to be able to customize their workouts based on their genetic information. We wanted to give information to an individual that says, “I’m built this way and these are the types of workouts I should be doing.”

The second part is risk factors. With concussion genes, for example, we look at genes that are related to the length of time an athlete has to sit out so their brain can absorb and get over the shock. It’s been genetically linked that specific genotypes recover faster than others.

RBS: How long did the test take to develop?

BM: We started about three years ago with the idea. The main reason it wasn’t launched then was cost. Genetic testing is very expensive. We wanted to make it available to 100 percent of the population. About a year ago, we acquired better technology that allows us to do that.

RBS: How does it work exactly?

BM: We created a Reynolds score, a translation of the genetic information into a number that’s easily digestible. The performance factors are endurance, speed/strength and muscle mass growth. You’re either more of an endurance athlete or a speed athlete or able to build muscle mass fast.

You go to the web and request a kit. It’s shipped overnight. You take a cheek swab. A prepaid envelope comes back to us, and we’ll have it back to you in five business days. We can then link you up with a company that customizes workouts.

I had it done. It indicated that I’m prone to soft tissue injury, and I just had my ACL redone a few weeks ago. So I’m the first believer.

RBS: Who are the customers for this product?

BM: We really guide it toward athletes from high school on up. As far as younger kids, that’s the parents’ choice.

RBS: There must be people who are ethically opposed to this type of testing. How has it been received?

BM: It’s been on the market about six months. It was well received. We’ve sold a good number of them. But it’s a catch-22 every time you put a genetic marker out there. The people who have disliked genetic testing for the past 20 years have the same argument. “Who are you to tell me?” they say. The others who use it for what it’s made to do are embracing it and use the information they can get out of it.

RBS: The company didn’t have to get FDA approval for such a product. But the FDA recently contacted you about it. What’s the concern?

BM: The FDA sent us a letter, and we met with them. We didn’t think we were qualified for a FDA review based on our interpretation of the guidelines. They’re trying to come up with guidelines and standards for everyone doing genetic testing. We want to have an FDA approved product.

RBS: How do you get the word out about a product like this?

BM: We have a sales team focused on Sports X Factor. We’re starting a marketing campaign so we can raise awareness. It’s a matter of educating the public and how they can apply the results. We’re targeting sports medicine and general practitioners that focus on sports physicals and training facilities.

RBS: How competitive is the market for this type of product, and how big is the potential market?

BM: There’s a company out there gives you a profile based on a single gene. We test nine genes on performance and five on risk factors. I think we’re probably the first to go at the sports market with a combination of genes. We’re kind of fortunate that no one is out there doing this. They can’t, because they don’t have the technology or the know-how.

It could be a $100 million [in sales] a year. That’s what we think in the next three to five years. And that’s very conservative, because there are a lot of people in the world. It is actually unlimited if you really think about it. If you are going to spend $300 on a pair of shoes, wouldn’t you want to know what type of athlete you are? You can see the correlation there.