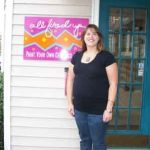 A local art studio is painting a third location into the picture.

All Fired Up, a paint-your-own-ceramics studio, is opening a spot in West Broad Village in November to be closer to its West End customers.

The business has operated a Carytown location since 1996 and has a second location in Midlothian.

“We’ve had to tote all of our stuff out there and bring it back to the Carytown store,” she said. “Demand was high for art programs out there.”

All Fired Up sells unfinished pottery and glass for people to buy and paint.

Talley bought the Carytown location in June 2008 from Meg Hargrave and Cindy Wofford, who opened the studio.

“I had no business training,” Talley said. “I wanted to be able to introduce art to people in the Richmond area.”

Talley, 28, is a VCU art graduate and spent three years as an art teacher at Spring Run Elementary in Chesterfield.

After running the Carytown studio for two years, Talley expanded with a Midlothian location in the former Work of Art space in January 2010.

When she took over All Fired Up, Talley said, it was breaking even, and both locations are now profitable.

“Midlothian in its first year was doing the same business as Carytown,” she said.

Talley leased a 2,500-square-foot space on Old Brick Road in West Broad Village this month next to the candy shop Sweet Spot.

In addition to pottery charges, which range from $3 to $50, the studio charges $6 for kids and $8 for adults to come in and design their own art.

All Fired Up will have no shortage of artsy competitors once it sets up shop in ShortPump.

Color Me Mine, a paint-your-own-ceramics studio, has been at Short Pump the past few years. And art class chain Spirited Art recently leased 3,000-square-feet next to the Wine Loft.

Talley said she will be at the West Broad Village studio to get it up and running, but will mainly be working at the Carytown location and teaching classes.

She’s looking to bring on seven employees to run the new studio to add to her staff of 16.

Construction starts at the end of the year……