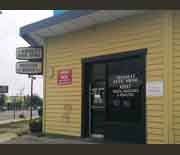 A notorious fixture on North Boulevard has changed hands, and the owner plans to transform the squalid property into a bright spot of the neighborhood.

Charlie Diradour, president of local development firm Lion’s Paw Development, bought the building at 1001 North Boulevard that has housed the Triangle Book Store the since the 1970s.

“This is something I’ve really wanted for a long time,” Diradour said. “There is terminology we use in real estate: ‘highest and best use.’ Well, this was ‘lowest and worst use.’”

The business closed more than a month ago, and the landlord was foreclosed on back in January by Richmond Mortgage Inc.

Diradour bought the building from Richmond Mortgage for $225,000 and says he plans to start rehabbing it right away.

“We’re basically going to take the facade away and expose the old Texaco station, with roll up doors facing Boulevard,” Diradour said. Dominion Construction Partners is doing the renovations.

Diradour said he is talking to prospective tenants that are local to Richmond and said the property is suited for a small restaurant or coffee shop.

Diradour owns properties in the Fan with restaurant tenants including Buddy’s, Kuba Kuba and deLux.

He said he has been eyeing the property for years.

“Three or four years ago, I wrote a letter to the owners inquiring as to the availability but never received word back,” Diradour said.

Diradour was driving by this summer and noticed a nondescript “for sale or lease” sign and called right away.

“That was a Friday,” he said. “I had a contract to them by Saturday and had the property under contract by Tuesday.”

As for the sign on the building, which advertises adult books, novelties and 50-cent movies, Diradour said it is being donated to the Library of Virginia.

Diradour hopes turning around the property will help revitalize the area.

“We need more local entrepreneurs to take part in the development of the Boulevard,” Diradour said.

I own commercial property on West Leigh Street near the Boulevard and this is exactly the mindset needed for the area. I am excited to see businesses and developers taking an interest in this crucial gateway to the city. Good luck with the project.

This is GREAT. Thank you Mr. Diradour. Now if someone would please buy the Interbake building and do something with it, we’d be on our way…

Good news! Developers have their eye on the Interbake building and is targeted to become lofts eventually.

Way to go Charlie! Your always working to better our neighborhoods, one deal at a time!

Great news — thanks, Charlie! Back in 1966, I worked at the old McGinnis’ Texaco at that location on a summer job after my sophomore year in high school. My mom was the Office Manager at Hyman Bros. Pontiac, located at the time at 1016 N. Boulevard, across the street, and she got Joe McGinnis to give me the job. I’m really pleased that the renovations will bring back the look of the old Texaco, including the roll up garage doors!

Someone just bought the Interbake building this week. Things are looking up.
Where is Rainbow Donuts when you need them?

There are many who would say that one of Lion’s Paw current properties is also being utilized at it’s lowest and worse use… The one housing the dump that Buddy’s has become. Just sayin.

Just because Buddy’s has become a dump is not anything on Lion’s Paw necessarily it is on the owners of Buddy’s who seem to have lost interest in there business. Sure maybe Lion’s Paw should help to do some renovations but it would require work from the owner too.

Go Charlie, way to put your money where your mouth is…ON THE BOULEVARD!

Buddy’s still serves great food…and most people who go to Buddy’s LIKE the Buddy’s atmosphere, even if some of us have outgrown the “scene” there. Don’t forget, Lion’s Paw also won an ACORN award for their more recent renovation of Deluxe!

The others commenting may not be referring to the atmosphere of Buddy’s Place but the condition and the appearance of the building which in their minds has gone downhill. As for serving great food, well that also is subjective.

Terrific use of one of my favorite phrases – “highest and best use” – which is NOT exclusive to real estate, BTW.

That place stuck out like a sore thumb even before the Boulevard started getting some re-vitalization love. Once that got rolling, Triangle Books, and its very sketchy customer base, became an actual eye-sore.

Glad to hear that Charlie’s snapped up the property, since most of what he’s been involved with improves its surroundings.

All we can say here at Clippi Headren Salon is, thank you, thank you, thank you! We are located just across from the bookstore and have been hoping against hope that one day it would not only become a more family friendly business, but become something that would add to the improvement of the community as a whole.

I for one am extremely disappointed. Triangle Book shop has been a Boulevard staple for 30+ years and due to its location has always been a close by and discreet place to purchase pornographic material. In addition to its geographically convenient location close to the fan Triangle is one of only a few places in town that caters to those with niche, albeit bizarre, tastes. One might be able to purchase a “Playboy”, “Hustler”, or even a “Swank” type publication from upstanding fan businesses, but I challenge you to find a recient copy of “Clown T**s”, “Dirty Midgets”, “WIld Sn*****”,… Read more »

As a parent of 2 kids on northside, I say THANK YOU! Thank you to Mr. Diradour for aiding in my after-school chatter with my kids…which no longer needs to include the conversation that starts with “mom, what’s an adult bookstore?” or “mom, they have movies for 50 cents! Can we stop?”

Would love to see it become a mid-priced neighborhood joint, for when those of us northsiders don’t have enough change in our pockets for K64 or Stronghill (love those places, just can’t always afford to eat there). 🙂

I’m so eager to see this building renovated! Very hopeful to see more Boulevard cleanup continue as this is one of the first impressions many visitors get of Richmond. I’d especially like to see that boarded up gas station you see as you come under the overpass by the Diamond be torn down, that place is such an eye sore.

Buddy’s food is pretty bad, but I don’t see how that’s charlie’s fault

Is Buddy’s food the focus of the article? I thought it was about transforming Triangle Book Store into something that will improve the Boulevard area.

No Buddy’s food is not great… not even tolerable. The place is a dive; and I dont think anything linked to ACORN should be bragged about as if an honor. We get youre a left wing, radical, bleeding heart liberal – Ted Kennedy clone. I just pray that you don’t give any young woman a ride home from Buddy’s some night while crossing any body of water… More people died in Ted Kennedy’s car, than ever died at the Triangle bookstore… but then again – doesn’t the left always hold up minimal irritations as the social scurge of the day…?… Read more »

ACORN the former historic preservation org which awarded Lion’s Paw for Delux is NOT the same ACORN you are thinking of. It’s why they changed their name.