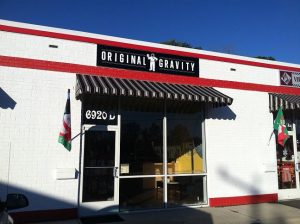 The kits sell for about $80 and include a fermentation bucket, a bottling bucket, sanitizer and a hydrometer, which measures the density of a liquid.

Ammendolia said the name for the store came from the hydrometer.

“When you take the initial gravity reading, it’s called original gravity,” he said.

The wine equipment kits, which come with a glass jug, run about $129. The ingredients kits cost about $35.

“Me and my roommates in college decided we’d give in a try,” he said. “I was brewing every week.”

Ammendolia said he used to brew about five gallons in one batch, or 48 bottles of beer.

Before turning his passion into a business, Ammendolia spent the bulk of his career as a manager for two local natural food retailers.

The beer lover said he gravitated toward starting his own business to fill a gap in the Richmond market.

After a three-month search, Ammendolia leased a 1,000-square-foot shop at 6920 Lakeside Ave. in October.

“I sold kits to some people that have been brewing over 20 years and brewing 15-gallons batches, and I sold some kits to people who never used brew kits before,” he said.

Ammendolia said he plans to start working with startup breweries and local wineries.

“I’m looking at contacting local vineyards to get actual grapes that are grown in this area,” he said.

Ammendolia added that when the shop gets up and running he plans to offer some home-brewing classes.

“A lot of people are curious but maybe a little intimidated about it,” he said. “Educating people is my focus.”

Hi. I just want to clarify that I sell not only kits, but I also have great selection of bulk grains and hops as well as both Wyeast and White Labs yeast.
Thanks,
Tony

“There aren’t any of these shops in the Richmond area…”

Actually, The Weekend Brewer in Chester has been providing ffriendly service to home brewers for years. It’s a bit of a drive, but I would consider Chester to be “in the Richmond area.”

I should have added:

Congratulations on the start-up! It’s great to see growing support for home brewing accompanying the growth in locally brewed commercial beer. I am looking forward to visiting your shop.

We shop at Weekend Brewer; however, it is quite a hike for us. Tony’s shop is a quick trip from Carytown.

Congratulations and thank you for helping the north-side brewing community. We’ll see you soon Tony!

I completely agree. I love Bob at Weekend Brewer, but when I just need to get a little extra hops or sanitizer, driving to Chester or paying the shipping is a real pain. I have been wondering why this hasn’t happened already. See you this weekend!

I actually said there aren’t any shops in Richmond, but I am technically in Henrico County anyway. I have been shopping with Bob and Jeanne at Weekend Brewer for at least 15 years. They have a great shop and if it weren’t for them I don’t know if I would have been home brewing all this time.