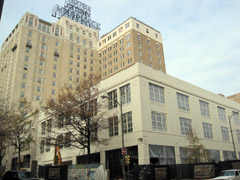 The building has been mostly closed since the late 1980s, but a developer armed with a $40 million HUD loan is trying to restore it to its previous glory.

The upgraded building on North Fifth Street was slated to open in September, but the website now says it will debut sometime in December.

The ever-changing completion date has put a damper on events that were scheduled for the ballrooms in the former hotel.

Suzanne Wolstenholme, owner of Colony Club Catering and Homemades by Suzanne, was the first business to sign a lease for retail space in the John Marshall.

Wolstenholme had several weddings and events booked for the grand ballrooms that were either rescheduled or relocated because of the unfinished space.

“The ballrooms weren’t done in November,” she said. “I had one bride that was scheduled for October but moved hers to the spring.”

Wolstenholme had a 150-guest wedding booked for the ballroom for Oct. 1. That event was held at her space on East Franklin Street.

Wolstenholme said she also had a second wedding booked for 250 people exactly a month later, but because the kitchen wasn’t ready, the bride moved her wedding to the Jefferson Hotel.

A bridal show Wolstenholme’s company was catering was also rescheduled from last month to February.

Michael Campbell, a principal with the developer Dominion Realty, told the Times-Dispatch in May that the first several floors were scheduled to open in October and that the entire building would be finished by March. Campbell did not return several calls and would not answer questions by email.

Wolstenholme said that the earthquake set the project back a couple of weeks and that the renovations were too extensive for the time frame that was set.

“They’re trying to restore it back to the way it was in the 1920s,” she said. “It’s a huge project. It’s hard to pinpoint an exact date.”

Wolstenholme said the opening date kept getting pushed back a month each time they informed her about delays.

She said her company is scheduled to hold the first event when the John Marshall reopens, a corporate party on Friday, and a Christmas tea on Dec. 10.

Wolstenholme has 35 weddings booked for the ballrooms and about 10 nonprofit galas.

Colony Club Catering isn’t the only business itching to get back into the renovated digs.

Hugh Campbell, the barber who originally started inside the hotel at the John Marshall Barbershop, is still cutting hair in his temporary space across the street.

Campbell told BizSense this summer that he planned to be back in his old space by Nov. 17, but that date was pushed back.

“I’ve been over here five years. It should’ve been just a couple years,” Campbell said. “It’s not been an easy rodeo.”

Campbell said he met with the owners about his barbershop a couple of weeks ago, and he said he expects to be back inside sometime between next week and Dec. 28.

The ballrooms, chandeliers, carpet and most everything from the second floor up have been completed, he said. He added the construction crew is putting the finishing touches on his shop.

“It’s a historical property. Tax credits have deadlines to meet or they start losing credits, so they’ve really pushed,” he said.

The business owner said he has a grand opening planned for Feb. 8 and has 370 people booked for the event.

John Camper, the owner of the building, would not make himself available for comment.

Choate Construction of Atlanta is handling the hotel renovations but did not return calls to BizSense.

A leasing agent for the John Marshall said the entire building would be up and running in two to three weeks.

The John Marshall started leasing apartments to residents in July. The building has leased 40 units.

Choate is doing a fantastic job. This is going to be a magnificent project. Thanks to the developers and those with the vision to invest in downtown. No one ever allows enough time to complete these types of projects. I’m sure they have run across all types of unknowns along the way, but the hard work that is going into this Richmond jewel is worth the wait.

Par for the course for an out of town contractor. Should have kept those jobs local.

I’m as anxious to see this building come on line as any in Richmond. The Chamber hosts its party there next Wednesday so I have my fingers crossed that it’ll be open in time. Its great to see some of these grand old buildings find new uses.

Bruce – I hope it’s finished as well. I attended the wedding at The Jefferson this past Saturday that was scheduled to take place at the John Marshall. The bride and her family pulled off a venue change in 1.5 weeks as they were truly holding out in hopes the JM would be completed. Either way the event was a success and The Jefferson & bride looked amazing as always.