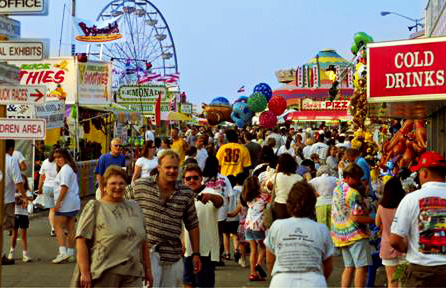 The bankrupt State Fair of Virginia might have found its white knight.

As the clock ticks toward a crucial March 7 deadline, the fair will soon present a deal to its lenders that might involve funds from a new investor.

The deal will likely include money from an unnamed buyer, who would purchase the nonprofit fair’s 360-acre fairgrounds and then lease the grounds back to the fair, said Billy Beale, chairman of the fair’s board of directors.

The fair could use the proceeds from the sale to pay back some of the money it owes its lenders.

“What we have done is worked with some people who are willing to be supportive of the fair, and we’ve come up with an offer that is about as good as we’re going to be able to do,” Beale said. “If that works for the lenders, we’ll move forward. If it doesn’t, things will go in another direction.”

Because the deal is still being worked out, Beale would not name the buyer.

“It is not a group of philanthropic people. It’s an entity that is willing to purchase the property and lease it back to the fair,” Beale said.

Beale would not discuss the terms of the offer, which the fair expects to present next week.

“We’re going to make the offer, and the question then becomes whether or not the lenders are prepared to accept it,” said Beale, who is also chief executive of Union First Market Bank.

The State Fair of Virginia Inc. — the nonprofit company that operates the fair — filed for Chapter 11 bankruptcy protection in December after failing to work out a deal with its lenders to restructure the $83 million it borrowed to develop its new fairgrounds in Caroline County.

It has since been trying to come up with enough money to persuade lenders to call off the hounds and keep the Ferris wheels spinning and the funnel cakes flowing.

The lenders have been granted the rights to about $21 million from the fair’s coffers that included what was left of its investment portfolio, a construction fund and an operating account.

At a hearing Tuesday in federal bankruptcy court in Richmond, the fair’s attorney, Jonathan Hauser of Troutman Sanders, didn’t mince words when describing what could happen should the March 7 deadline pass.

“If we don’t [come to an agreement], on March 7 at 5 p.m., we close the doors, turn out the lights and literally hand them the keys,” Hauser said.

Hauser said the fair’s proposal next week would likely include two parts: money from a buyer for the land and a reorganization plan to satisfy the remaining creditors.

That group consists of 15 lenders but is led by South Carolina-based ArborOne.

Others have expressed interest in helping the fair, Beale said, some more serious than others.

In addition to saving the 150-year-old fair, the unnamed buyer is looking to make some money.

“There has to be a business reason for doing it. But for many, the first thought has been trying help the fair through a sense of community,” Beale said.

Despite it all, Curry Roberts, the fair’s chief executive, remains confident that the show will go on.

“We’re still planning on a fair this year,” said Roberts. “But that’s really going to be up to the lender.”