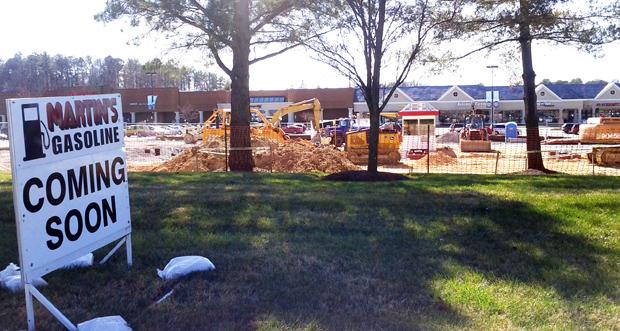 The supermarket is opening its first gas station in the Richmond area at the Westpark Shopping Center at 9621 W. Broad St. in May. A filling station at Martin’s in Williamsburg was a hit.

“Since they’ve been hearing about Williamsburg, all the store managers have been asking for one,” said Jim Scanlon, Martin’s regional vice president.

Scanlon would not discuss how many Martin’s stores would get gas stations but said that a good number of stores would be included.

The “fuelperks” program attached to grocery purchases at Martin’s will be familiar to former Ukrop’s customers, because it’s the same one the family grocery chain employed. The program, which works at Mid-Atlantic Convenience Stores stations (or “Uppy’s” stores) and those attached to Martin’s stores, saves customers 10 cents per gallon for every $100 spent on groceries.

“It’s really the best program out there,” Scanlon said.

Other stores, including Kroger and Costco, have fuel programs. Kroger’s filling stations also give customers 10 cents off for every $100 spent, for up to a $1 per gallon savings.

“The margins aren’t high [selling gasoline], but there is a customer loyalty factor that goes hand-in-hand with what goes on inside the store,” he said. 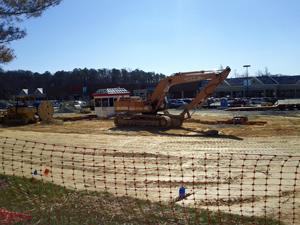 Scanlon, who was a Ukrop’s executive before being hired to oversee the transition to Martin’s, said he was bullish about the year ahead for the chain, which is still widely seen as a newcomer to the area.

“We were pleased with the end-of-the-year numbers from 2011 and the trend this year has been positive each month,” he said.

The Richmond Times-Dispatch reported in June that Martin’s market share had slipped slightly from 2010 to about 15 percent. Ukrop’s had about a 17 percent market share when it was sold.

“When the numbers came out, I told my team to keep their heads up, because I had seen the sales trend line,” Scanlon said. “I know where we are going, and the numbers are going to be a lot better this year.”

Scanlon said he and his staff are also working to upgrade the customer experience.

“Service is an area of continuous improvement for us,” he said. “And while I say that, I think we’re in a good place now. We took some hits in 2010 while we were learning new systems, but we took the criticism and I think we’ve responded.”

You’re wrong about Kroger: you can get up to 40 cents off a gallon at Kroger.

And Kroger gives you 50 fuel points for every perscription filled. It’s better than Martin’s.

Kroger gives 50 points for a prescription, and has a limit of $1.00 off. Martins is tied to the most expensive stations so the savings balances rather than saves. Kroger gives you 3 cents off every time. Both of them have a 30 day limit of use so the total $ doesn’t mean much unless you spend over $1,000 in groceries each month.

Martins needs to hire the Ukrops HR and personell department for a re-fresher on customer service. Selling gas will not save this floundering supermarket, they need to get back to the basics that made Ukrops so successful.

Apparently a lot of my friends think Kroger is the bee’s knees. I have not set foot in their stores since a pharmacy tech loudly humiliated me over whether or not we got a robo call that my husband’s prescription was ready. When I complained, the pharmacist apologized and asked me where I would like my prescriptions transferred (not IF, just WHERE). Loyalty has to go both ways. I’ve always been treated well at Martin’s, they double manufacturers’ coupons up to a dollar, same as Kroger, the quality of their meats and produce is very good, so I’ll continue to… Read more »

The gas stations are fine but that is not what will make me shop at Martins. The Cafe’s are not what they used to be in our usual locations. Longer lines at peak lunch hours, out if certain supplies, the little things we always counted on before. The consistency factor just isn’t there. I agree with above comments about customer service.

Actually, Richmond is a special market for the Shell Grocer Rewards program with greater incentives than most markets running this program. Along with a few cities in Ohio and Tennessee, RVA participants can save up to $1 per gallon using Kroger points.

And where the T-D reported it here:

Martin’s needs to do much more than offer gas to get more business in the Richmond area.People are finding out that the talk of Martin’s being just like Ukrop’s was just talk.Kroger is being proactive,changing policies,improving service,Martin’s has lost ground not gained it.Martin’s should replace againg smaller locations with new larger stores,dump pointless cafe locations and do a top to bottom revamping of prices.

Gas perks are the last thing that would bring me back/to Martin’s. Their Customer Service is awful at Carytown. Trying to get someone to pay attention to you in the Deli Department is near impossible. I have walked away a few times and will not again return. I now treat Martin’s as a 7/11 store since I know that I can go in and out for an item or two without waiting in line. It is never ever busy… I miss the workers that were there for years. All are gone..

In response to Sheila Berry: It’s true that Kroger does keep some shockingly rude people on staff–they are protected by unions. But overall their stores are run better than Martins, which seem like a relic from another age. Way too many employees milling around, and the last time I was in one, there was no self-serve checkout and you weren’t permitted to take your groceries to your car. Anachronistic to say the least!