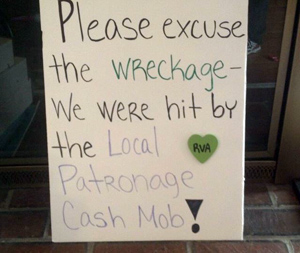 The “shop local” movement has a new mobster.

By starting Richmond’s first cash mob, Chesterfield day-care owner Rainey Niklawski has steered thousands of dollars in sales to a local produce market. And she wants to maintain the momentum, mobbing a different business every three weeks through her group, RVA Local Patronage Mob.

“I think we’ve all fallen victim to the ease of going to Walmart and Target, because everything’s there. But we’ve forgotten that Richmond runs on local business,” Niklawski said. “We need to get back to putting money out locally.”

Through Facebook, Niklawski creates an event and targets a business every third Saturday. Participants can go at any time on that day. It’s like a flash mob, only without the synchronized dancing. (Not that you are prohibited from dancing.)

Once a business is mobbed, it gets to pick the next business for the group to bombard.

Farm to Family, a natural produce and grocery market on Mechanicsville Turnpike that also has a mobile store in a bus, was the first to be hit. About 230 people came in one day.

And the crowd came just in the nick of time for owners Mark and Suzy Lilly.

“We did a week’s worth of business in one day,” Suzy Lilly said. “It was a huge boost to our business, it was a week-long advertisement for us. … I think I cried like four times.”

Lilly said most people were buying milk, eggs and sausage and spending between $10 and $50. Some customers spent more than $100.

The market has been in business for two and a half years, and Lilly said it’s still a struggle to keep their heads above water.

“It’s almost impossible for small businesses to get funding from traditional banks,” she said. “We had a better January then I expected, but we’re still going week to week.”

Since getting mobbed, Lilly said the market has seen many repeat customers.

Niklawski said she got the idea to start the group in January.

“I read an article about people that gathered and went to a mom-and-pop hardware store in Wisconsin,” she said. “I thought, ‘I should get something started like that in Richmond and do it all day long.’”

Niklawski said the group helps get the masses revved up to spend money locally and draws new customers to businesses.

“It’s a good way for people to realize what kind of business is out there,” she said. “It opens doors for these businesses.”

Niklawski, 26, runs a day care out of her Brandermill home.

Once demand picks up, Nikalwsi said she’ll start mobbing businesses all over town.

“I’m still trying to get started,” she said. “I don’t want to spread my resources too thin.”

The next mob will hit Bombolini Pasta on West Main Street on Feb. 25.

What a fabulous idea! Thanks for helping local businesses!

This is wonderful! Richmond gets its “personality” from these small businesses and restaurants.

Way to go – Let’s continue to make Richmond a bastion of innovation & creativity – Keep up the great work!

Congratulations, Rainey, on coming up with a creative idea with a benefit for everyone!
Shopping local is a great habit to instill in our young ones.
As a local family business owner, I understand the importance first hand.
( :
Beverly

Rock on Rainey!!! This is such a great idea, talk about thinking globally and acting locally. So many positive things are coming from your brilliance.

What a terrific idea! You go Rainey.

This is awesome. Makes me very proud of the Richmond business scene. Thank you Rainey Niklawski! You deserve a medal.

What a fabulous concept and service. Remember the needs of local non-profit arts organizations who could greatly benefit from this kiind of promotion. The Cultural Arts Center at Glen Allen would love to be mobbed! Mobbers can shop in our gift shop, see great art (for free) in our galleries and buy tickets to upcoming performances!

Do we “friend” Niklawski on Facebook to follow the stores chosen each month? (And I love Bombolini pasta!)

Frank from the Bank

Mob me please its ALL about the small businesses

Words cannot describe how incredibly humbled and grateful Mark and I feel at having been chosen the first Richmond Cash Mob supported business. It was a wonderful day and so powerful to have this positive and loving (and very fun) community-based financial support come along to literally save us in the dark of winter (and your support directly positively affected the all-local farmers, growers, food-makers and artisan vendors our business supports). I truly hope that every local business, non-profit and farmers’ market gets to experience this as the movement gets rolling. Rainey — Thank You. You are a true local… Read more »

What a fabulous way to support small businesses. As a one-shop business owner, I understand the importance of speading the word locally and keeping our dollars local. Go Rainey!

Rainey,
You are a local hero!!! Thanks for “getting it” and supporting small business!!!

Might work for a short time and it is a very noble and thoughtful idea. Regretfully the “Times they are a changing”

What a fantastic idea. I’m going to the mob page now and can’t wait to visit and support more local businesses. Thanks for your leadership, Rainey!

What a great article, Rainey! Can’t wait to participate again. 🙂

As a small business owner myself, I feel that Rainey’s idea is fantastic. She turned an amazing idea into a movement. Way to go Rainey! Richmond is proud of you!

Ditto to all the accolades. One reason we live in the fan is to b a part of local life.
I’m also the owner of the grease monkey shops on boulevard and staples mill….please mob us too!

Ditto to all the accolades. One reason we live in the fan is to b a part of local life.
I’m also the owner of the grease monkey shops on boulevard and staples mill….please mob us to
AND. we will trade you car service for veggies!

We would love to have you mob us!!!! Monogramming mob has a nice ring to it!

Mob my book and I’ll have another one out in a month. Just kidding (a little); a good deal for local, neighborhood type business.

MOB ME PLEASE!!!!!!!
what a fantastic idea!!!!!!
In fact, if you mob me one Saturday at the South of the James Winter Farmer’s Market, you’d be mobbing a whole slew of local biz!

What a wonderful and caring idea! Its just like you Rainey. I am very proud of you and even more proud that you are my daugher! You have wonderful ideas that everyone seem to love and follow. Keep it up, we all need more people like you to make life better. Love ya!

Rainey you are an inspiration. I’d love to see a mob at our door and can only imagine how great that would be. It’s been extremely difficult to keep going in this economy and you are a shining star that brings hope for the future. Thank you!

I want to be PART OF the mob. For those chiming to be mobbed, read the article – its themobbed business that chooses, not the organizer. I’ll check the FB page I guess I’ll find out whats next there. I love the key component that the business owner being mobbed makes the choice for the next one to be mobbed. Awesome. Fresh pasta on teh way for my family this weekend! This is a form of voluntary transfer of resources from those that have some to those that need some…the best way to do such a thing!

WOW WOW WOW ! JUST AMAZING !
What a clever idea to boost and sustain the ‘shop local’ momentum!
Congratulations to you, Rainey!
AND all of us local business owners THANK YOU !
Sincerely, Becky Lorraine,
CHRISTIAN LORRAINE ORIENTAL RUGS

Read about this great idea all the way up here in Fredericksburg. Awesome to do good!
We all need to get back to our Real American Roots- Small Business. That’s where it all started.

Check out my online Small Business on Etsy & Fan us on FB to be eligible for our Giveaway.

The previously mobbed place chooses our next stop, but Ashland is getting a visit this weekend so I can report to the mob some of the great local places to visit on the northside!

Rainey – I was so excited to participate in your 8th Mob yesterday. The word continues to spread, and I hope the 9th Mob is even bigger! You’re an inspiration!

Will try to participate in cash mobs everywhere each 3 weeks. What a wonderful way to spark sales and interest in local businesses. They can’t match the big boys advertising budgets. I love it!