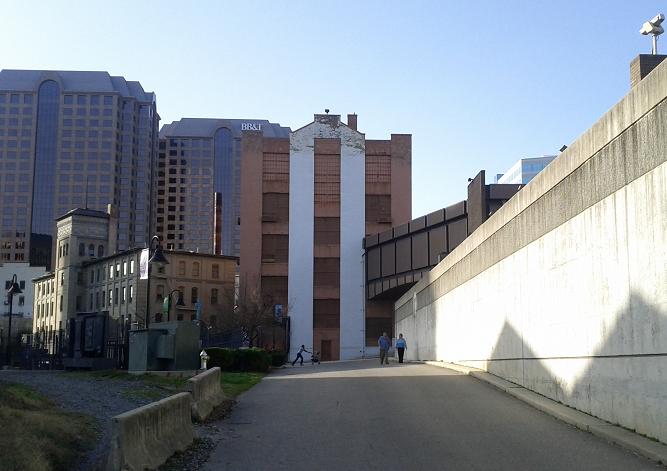 One of the biggest real estate deals on the Richmond waterfront closed this week, and the new owners want to add to city’s skyline.

The first phase of the massive project calls for the five dormant aluminum-manufacturing buildings to be converted into 174 apartments and 8,000 square feet of retail along the Canal Walk. Construction will begin on those apartments this weekend, with the first units coming on line before the end of the year, according to the developers.

But WVS and Fountainhead have their sights set even higher. 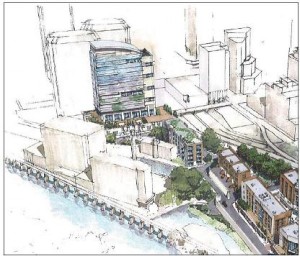 Part of the land in the deal is a lot at the corner of 10th and Byrd that Cushman & Wakefield | Thalhimer’s Jeff Cooke is shopping around as a location for Richmond’s next high-rise office building.

“It’s got a clear view of the river, and it’s one of the few remaining locations on the river to put a high-rise,” Cooke said.

The site for the potential high-rise, which is adjacent to the Riverfront Plaza buildings, is about 55,000 square feet, or about 1.2 acres. Cooke said he’s marketing it as a 15- to 20-story, 350,000-square-foot skyscraper that would be nestled between Troutman Sanders and BB&T in the skyline.

Fountainhead and WVS might look to sell the land to another developer who would handle the high-rise, Cooke said.

Tom Papa, one of the principals at Fountainhead, said that financing for a high-rise project would be difficult to obtain until an anchor tenant is lined up.

“We’ve had a fair number of large companies scout that area as a location, but once we’ve locked in someone for about 100,000 square feet we can start to move ahead with it,” Papa said.

Fountainhead and WVS have been trying to buy the Reynolds North Packaging Plant land since February 2010, shortly after the aluminum foil company moved the manufacturing operation to Louisville, Ky. The developers initially looked at financing the deal through the U.S. Department of Housing and Urban Development, which they said at the time would take at least a year to close.

But a year came and went, and the financing still hadn’t come through, according to Richard Souter, vice president at WVS.

“When all the capital markets dried up, HUD really was the only game in town,” Souter said. “Their interest rates were so competitive that developers all over the state started applying, not just for new construction loans, but for refinancing, and they just ended up getting a huge backlog of applications. From an outsider’s view, it looked like they got overwhelmed.” 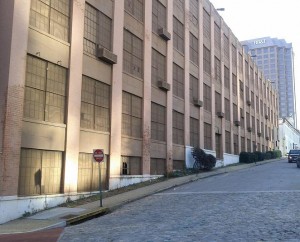 Souter said it took almost a year for WVS and Fountainhead to even be invited to submit an application for the financing, and then there was another wait.

“You send in an application to HUD, and it’s just sucked into this machine and you have very little idea of where it stands and what’s going on with it,” Souter said.

Because of the great rates on HUD loans, the developers were willing to wait. But the longer it dragged out, the more impatient Reynolds became.

“All this time, we didn’t own the land,” Souter said. “Reynolds was incredibly patient with us through the process, but they told us, ‘At some point you’ve got to close’ … and they told us that by raising the purchase price every month we didn’t close.”

After months of delays, WVS and Fountainhead decided to seek financing though the Virginia Housing Development Authority, which Fountainhead knew from previous projects.

One hundred days later, the developers inked the deal.

“Fundamentally we’re developers, so we want to be doing stuff,” Souter said. “Planning and envisioning is one thing, but once you’re knocking things down, building walls and moving dirt, that’s when it’s really exciting. We’re ecstatic.”

Souter said that during the next month the team — a 50/50 partnership between WVS and Fountainhead — will focus on marketing and pre-leasing the first five buildings, which will be rehabilitated with the hope of securing historic tax credits.

One of the buildings, the so-called Italianate Building, will have the bottom floor zoned for a restaurant, which would bring the area a little bit closer to the San Antonio River Walk vibe developers have been dreaming about since the 1980s.

Cooke, from Thalhimer, said that once the whole project at Reynolds North is done, it would bring about 500 apartments to the area, a new hotel and ideally a few new restaurants.

Thanks god! Another 500 apartments downtown! I was just thinking there weren’t nearly enough being built!

Good to hear that the Italianate building will be preserved, and that they’re repurposing the old Reynolds building. I’m curious to see a fuller visual of the planned skyline – sounds like it could push the tipping point for Shockoe further toward live/work/play, rather than the “just play” zeitgeist that’s reigned down there as long as I’ve lived in Rivah City.

This is a major missing piece of the puzzle for downtown and the river front. Thank you so much to the developers for all their hard work by continuing to make our city great. As long as they are renting I say the more apartments the better. More residents will only make downtown better. It will bring more retail and even more great events. I’m tired of seeing the financial district as a ghost town come Saturday. It’s time to breathe more life into the city.

Capital markets dried up? Really? The Richmond Wells Fargo office has financed several new apartment developments- all of which were over $20 million. I think for those who say ‘no one is lending’ expect HUD and VHDA is because they are not very creditworthy. I will caveat and say that I am an architect who bid on these referenced apartment jobs and know for a fact they were financed in 2010- 2011.

As a previous Fountainhead subcontractor, I can vouch for plenty of gymnastics to achieve slow payment.

Yes, there are tons of new apartments under construction currently, but I really don’t believe that we’ve reached a saturation point yet. As for this project, it demonstrates how much effort is required to get downtown pushed on the other side of the Downtown Expressway. Even successful projects like Riverfront Plaza and Haxall Point haven’t done much to get some real action onto the canal. This could be a tipping point, and I, for one, support it.

This is a huge step forward for downtown Richmond. Kudos to Fountainhead and WVS for seeing great potential and sticking with this project despite the hurdles. Can’t wait to see the results!

WVS hasen’t even finished the Rocketts Landing project that they started years ago! People were promised so much there and WVS never delivered. If they are unable to lease/sell apartments at that project why start another? Will this one be full of empty promises just to sell apartments?

I think I have heard this but what about reconnecting the two canals. It will NEVER be San Antonio as long even locals get lost trying to walk between the canals. Support the redevelopment but I hope they take real action to open up the property along the canal.

This is great – RVA really seems to redeveloping
and building at a feverish pace over the last year.
I look forward to reading more about this.