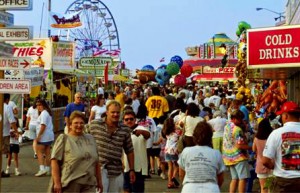 The State Fair of Virginia has gone out of business and will be sold to the highest bidder.

SFVA Inc., the nonprofit that operates the 150-year-old fair, the Strawberry Hill Races and the Meadow Highland Games & Celtic Festival, filed Wednesday for Chapter 7 bankruptcy liquidation, ceasing all operations and handing over its land and assets to lenders.

The lenders have the keys to the operation and are auctioning the assets within two months with the possibility of a buyer coming in to bring the fair back to life.

“I feel pretty certain that there will not be a state fair in 2012,” said Billy Beale, chairman of the SFVA’s board of directors and chief executive at Union First Market Bank.

The SFVA converted its bankruptcy from Chapter 11 to Chapter 7 liquidation Wednesday after lenders rejected its offer to sell its property to an outside investor and use the proceeds to pay down its debts.

A $5.5 million offer was presented last week with the help of money from a mystery investor. The fair hoped the offer would satisfy lenders who were itching to get the land as collateral to cover just a fraction of what they are owed on defaulted loans.

“We made as a good an offer as the state fair could afford to make,” Beale said.

The fair filed for Chapter 11 bankruptcy protection in December after haggling for years with a group of lenders to restructure $83 million it borrowed to develop a new fairgrounds in Caroline County. The fair at one time had a $40 million investment portfolio that served as collateral and earned investment gains to make payments on the loan. But the lenders forced the fair to sell some of that portfolio at the bottom of the recession, locking in 50 percent losses and causing the fair to violate loan provisions and eventually miss payments.

On Wednesday afternoon, lenders took immediate possession of the land after a court order.

“They wanted to pick up the keys this afternoon at 4:30,” Beale said.

The lender group will foreclose on the property and auction the fair’s assets within 60 days, according Christine Myatt, an attorney with Nexsen Pruett representing lead lender ArborOne.

“Our goal was not to shut down the state fair,” Myatt said.

Myatt said someone could buy the land at auction and bring the fair back to life.

“Hopefully there will be some third parties out there who will be interested in acquiring the properties, and if they can reinstitute the fair, that would be great,” Myatt said. “I’m hoping people come out and say ‘hey, this is an opportunity to buy the assets and the state fair name and operate it ourselves.’”

Toward that end, SFVA said it has asked the lenders to release the rights to the copyrighted names of the State Fair of Virginia and its other events, including the Strawberry Hill Races and the Meadow Highland Games & Celtic Festival.

Beale said it made the request to release those names to a shell corporation the SFVA kept on the side.

“If some group of Virginians wants to cobble together a group of volunteers to produce the fair again, [they could] have those names available,” Beale said.

But Beale’s not optimistic.

“We do not have high hopes the lenders will do that,” Beale said. “We think they’ll retain the names for some purpose.”

Myatt said her clients have not been asked about releasing the rights to use the names.

Not having access to the names doesn’t prevent someone from starting a state fair in some other form, with a new name and likely at another location, Beale said.

“I do think it’s probable at some point in the future that a State Fair of Virginia will be held again, although I probably shouldn’t use that name,” Beale said.

The fair’s troubles date to a massive 1998 real estate deal.

In 2003, SFVA bought the 360-acre Meadow Event Park in Doswell for $5.3 million. Using the investment portfolio as collateral, the fair took out loans with a group of 15 lenders for $83 million. The fair planned to use the portfolio’s income to more than pay for the principal and interest on the loans. Such was the optimistic thinking after more than 10 years of a bull market.

That plan went awry in 2009, when the financial markets collapsed and the lenders forced SFVA to sell its stock positions at the bottom of the market.

Beale said the lenders made that move despite objections from the fair’s board and its financial adviser, Smith Barney.

“They had control at that point because we had created an event of default,” he added, referring to loan requirements that the Fair maintain a certain value on its portfolio. “They were in the driver’s seat and made a bad decision.”

The SFVA has worked since December to find an individual or a corporation to put up money to help satisfy the lenders and to save the fair and its grounds. The lenders had already been granted the rights to about $21 million from the fair’s coffers that included what was left of its investment portfolio, a construction fund and an operating account.

The plan was to have an investor purchase the land, give the money to the lenders and lease the land back to the fair.

That white knight investor came forward, but with too little cash.

Beale wouldn’t name the would-be investor, saying only that it was a Richmond-based commercial real estate firm.

Myatt wouldn’t comment on the dollar amount that the lenders would have accepted or whether the fair’s $5.5 million offer was even in the ballpark.

“SFVA had a lot of opportunity over three months to raise funds, and they’ve burned through a lot of our money in the process,” Myatt said. SFVA has been living off funds from the lenders during the Chapter 11 process.

The state fair has operated in Virginia for 157 years, since 1854. The 11-day event drew hundreds of thousands of spectators each year and took six months of planning.

“If somebody were to come in and buy the property in 60 days and say ‘Can you put it on,’ something could be done, but I’m not sure how much could be done,” Beale said.

“The highest likelihood would be returning to the racetrack [Richmond International Raceway] and do it in a smaller way,” Beale said. “But we’d still have to raise a couple million to finance the thing from start to finish.”

The State Fair has been part of my ongoing interest in farming since I was eight years old. Now that I’m in my forties and have the means to do so, I’m pursuing sustainable agriculture. The death of the Fair means that other eight-year-olds will never have the chance to follow that path. Shame on the lenders, and shame on SFVA for investing so recklessly in a shiny new property rather than guarding the assets that meant so much to so many people.

Agree with Susan, however, let’s hope someone can pick up the pieces and make it even better. There is a food and farming revolution going on. Let’s hope the new state fair can get on board. Let’s get back to enjoying the fruits and labor of our great state, instead of cheap pizza and overpriced junk food from who knows where.

Selling the fairgrounds to RIR in 1998 was a huge mistake. Atlantic Rural Exposition has no one to blame but themselves. The market had something to with it but maybe their greediness got the best of them. Is bigger always better? As a long time fair goer and Strawberry Hill Race rail pass holder (25 yrs) I’ve watched ARE price gouge year after year. Their signature events drew large crowds and were big money makers. I guess they didn’t realize a convenient location may have been the key to their success.

Coulda, woulda, shoulda, it certainly is what it is. Musta been a real business genius to put all that into the crapshoot that is an “investment portfolio”. A lesson to all those who’d have their own business and grow it organically into something long lasting.

This is just another example of corporate greed on the lenders’ part. I’m not going to say SFVA was smart in some of their decisions but they were putting forth solid effort to keep the lenders happy. You can throw all the legal jargon out there pointing out what SFVA did wrong or what requirements weren’t met. To do this to such an organization that means so much to the entire state of Virginia shows absolute greed and no heart.