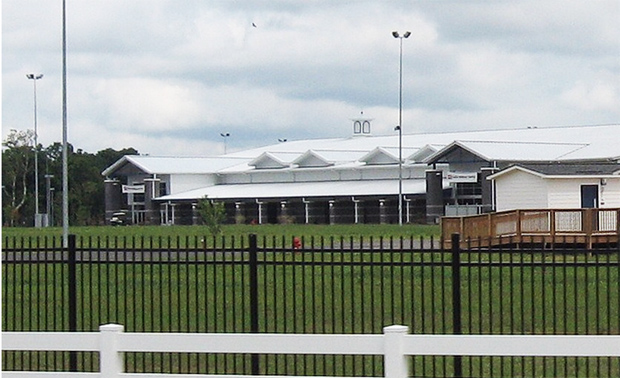 With the State Fair of Virginia defunct and its fairgrounds set to go to auction, developers are likely salivating over the potential of the fair’s massive property in Caroline County.

But whatever plans prospective buyers might be dreaming up, one thing is certain: Redeveloping the land won’t be easy, especially if Wayne Acors and the Caroline County Board of Supervisors have anything to say about it.

“I can assure that if [any new owner] thinks the board is going to change their mind about the zoning, they are going to be sadly mistaken,” said Acors, chairman of the board of supervisors.

The land was zoned specifically for the fair, a designation that took more than a year to obtain.

“We wanted to maintain some type of rural atmosphere and still wanted to use it beneficially,” Acors said. “That’s the reason we supported the fair, and that is the ideal means for the property.”

In addition to the zoning, there are unusual and potentially deal-killing restrictions on the land, including utility issues and bond liabilities.

For example, Caroline County does not provide water or sewage to the land. Hanover County provided those services when the fair took over the land. That utility deal applied only to the State Fair of Virginia Inc., the bankrupt nonprofit that operated the fair.

A new owner also would likely have to buy his or her way out of bond agreements with the Virginia Department of Transportation, which built tunnels and roads around the fairgrounds.

The fair and the county tried to use those restrictions as leverage during their negotiations with lenders over the past few months.

The county even published a letter in January in a show of solidarity with the fair’s operators, threatening that the county would not be amenable to other owners, no matter what purpose they might have in mind. https://richmondbizsense.com/2012/01/18/comrades-in-farms/

Longtime local developer Bob Atack said that although his peers might be thinking about the land’s potential, those restrictions would be a roadblock.

“I think it’s an attractive piece of real estate,” Atack said. “Our biggest concerns would be the entitlements.”

“But it’s a unique property, and maybe you could be find a unique use for it other than a conventional development,” he added. “I think it would be a very specialized use.”

Money, of course, will be the deciding factor in the land’s future.

The fair’s lender group will put the land up for auction, but Atack doubts there will be any takers immediately.

Lenders initially gave the SFVA $83 million. The tab now stands somewhere just below $80 million. The lenders received $21 million from the fair’s coffers, which included what was left of its investment portfolio, a construction fund and an operating account. According to the SFVA, the land is worth about $5 million.

That still leaves the lenders with a staggering loss.

Acors, with Caroline County, is loyal to the fair, even though the lenders now own the land another owner will likely take over the property in the near future.

Acors has said that bringing the fair to Caroline County meant a lot to the community and that it has been a good source of revenue.

When asked whether the county would cooperate if another firm came in, bought the land, and said it would run its own state fair, Acors said it’s a possibility.

“As long as it’s going to maintain the state fair atmosphere,” he said. “If someone thinks they are going to come in and try to do a residential development or something along those lines, it’s just not going to happen.”

Despite the bankruptcy and the land changing hands, the county has not given up on the idea that a state fair, in some form, might spring back to life.

“The county, I think, is certainly still trusting that things will work out and [that] the state fair will still be held in Caroline County at some point,” Acors said.

The best use for the property is not residential or commercial development. It’s too far from Richmond, especially with fuel prices what they are and, if we re-elect President Obama, prices going even higher. There’s not enough in Fredericksburg to justify another large development in that area. Caroline County is going to be stuck with it.

Caroline County against the shrewdest “Donald Trump” lawyers in the land … uh, I know where my monies at.

I recall Chesterfield’s bravado in the early-’70s … and Richmond picked their pockets clean with annexation.

Heard BizSense cited as source for news report on this on NBC 12 this morning. Well done!

Their first mistake was moving from the RIR venue before a solid plan for relocation was in place.
The Eastern Henrico site would have been ideal and considering how the local government is so gung-ho about a new ballpark in the area, more should have been done to secure the Fair closer to the Capital City.

Unfortunately, the lenders didn’t “give” SFVA anything, they loaned it to them unadvisedly, no doubt with the same dollar signs in their eyes that the nearsighted SFVA had. Normal economic patterns ensued, and here we are.

Why blame the banks? If anyone took the time to look at the form 990s which are public information and can be googled, then anyone would realize that Curry Roberts and his management team took tens of thousands of dollars of bonuses in years the SFVA lost money. Why bonus yourself to fail? This is 100% solely the fault of the management team. And does someone who works part time merit a $225,000 a year salary and a $20,000 bonus on top of that?

addition and subtraction would be good skills to look for in new owner/sfva manager along with ethics.

anyone ever figure out who the silent partner in the cayman islands was with sfva.

Everyone forgets that this piece of land was the home to one of the greatest race horses ever and a link to the strong history that VA once had in the horse industry. Land is not about development and getting as much money out of it as one can get.

the land is also the site of 3000 + yo native american activity as well as colonial trading. The North Anna is/was a vital spring migration spawning site for fish. Its not been made apparent how the North Anna power plant has affected this spawning with water temp changes and flow. lots of karma/juju in this area.

I hope that a new organization takes over. It needs new life breathed into it. The state fair is an embarrassment to the state of Virginia. It does very little to showcase what this great state has to offer.